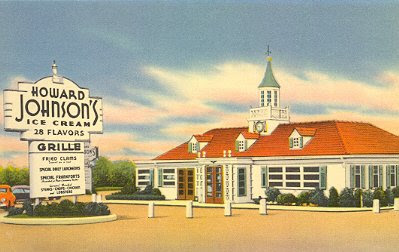 2. Larger format restaurants that represent more of an investment and draw a larger audience from a larger geographic area. Essentially the same people as above who now have a more established customer base.

3. Locally-owned specialty retail shops, including art galleries. Yes, but only after there's a base population of diners and entertainment seekers that provide the foot traffic.

4. National chains, the risk-averse businesses that hike up rents, this only happens if there is a weak sense of community, otherwise the local residents prefer independents that support their economy and culture.
__________
I think it's important to think about this in terms of the demographic and perception status of the neighborhood. All neighborhoods and commercial districts can be categorized as healthy; transitioning, emerging; and distressed (using criteria developed by the DC Office of Planning). And each type probably can be further split into early, middle, and later stages.

Healthy commercial districts are not without issues, but the issues vary. Even a district like Adams-Morgan is probably considered transitioning, as is Barracks Row. In some respects, Richard's Rules for Restaurant-Based Revitalization apply more to transitioning, emerging, and distressed commercial districts. But that makes sense, since those are the districts most in need of "revitalizing." (For issues regarding problems engendered by the Late-Night Economy, see this entry, "Restaurants and liquor licenses", from April.)

My rules are focused on building business from the people who are already present in your retail trade area, people who aren't patronizing your commercial district, because in their opinion "there's nothing there."

It's our job as revitalizers to make sure that "the there is there."

Chef-driven restaurants aren't necessary to drive revitalization, although they are nice to have and can be decent draws--but really how great was La Brasserie at driving the growth of the 300 and 400 blocks of Massachusetts Avenue NE? Downtown is still pretty bleak at night despite the number of high quality restaurants such as Occidental, Red Sage, and others. (7th Street is a different story, see below.)

Revitalization is dependent on restaurants. A complete destination has places to see and things to do, things to buy at interesting places to shop, and places to dine.

Restaurants that augur revitalization have five characteristics, and these characteristics support high patronage amongst a core group of customers that will frequent the restaurant from 2-5 times/month, at least in the beginning. This level of patronage is necessary to provide the cash flow needed to stabilize the risk involved in opening up in a secondary market. Remember the 80/20 rule?--80% of your business comes from 20% of your customers. Ignore this at your peril. 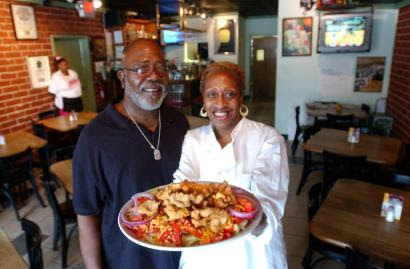 T. Levette Bagwell/AJC. Willie Broughton and his wife, Ruby, owners of the Green Apple Bar and Grill, show off a fried chicken salad on the one-year anniversary of their opening. Before he retired, Willie Broughton already had determined that he eventually would open a bar at the site.

1. Relatively appealing cuisine that isn't too specialized; food that is attractive to a large number of people--Italian, Mexican, and "American," seem to work best. You want at least 100 customers/nite. These days Thai food is moving into this category. Chinese seems to have lost its appeal. Restaurants like Indian, Caribbean, etc. are just a bit too specialized, and therefore don't get the weekly or at least a couple times/month patronage that such restaurants need especially when they are located in emerging commercial districts.

4. Competitively priced; you can't have drinks at $8 or most of your entrees costing $13-$20. If your prices aren't competitive and maybe a little less expensive than the market, you won't get that frequent patronage that is necessary for your success. Pitchers of margaritas or sangria are good, maybe not pitchers of beer, which seem to attract a rowdier more alcohol-centered clientele.

5. Nice interior; it doesn't have to be stunning or a $300,000 interior renovation, but it can't be threadbare, and it has to be appealing.

IMO, restaurants in the area like Banana Cafe, La Loma, and La Lomita exemplify these characteristics. Other restaurants and coffee places that are leading the revitalization of their commercial districts include include Tryst and The Diner which have brought life back to Adams-Morgan during the day, Boss Shepherds (now Peppers) on 17th Street NW in Dupont Circle, Dos Gringos in Mt. Pleasant (they have an absolutely killer Vegetarian Chili), and Mocha Hut and Colorado Kitchen in the greater Brightwood area.

Probably the best example in Washington, DC is Jaleo on 7th Street, which anchored the revitalization of the East End of downtown and is as significant, if not more so, than the MCI Center). Jaleo opened in 1993, years before MCI. Somehow, this restaurant is just as trendy as it was when it opened, and most every weekend they go through $100,000 worth of food (wholesale cost). Now there are a dozen top notch restaurants within a couple blocks of Jaleo, some owned by the same company like Cafe Atlantico and Zaytinya, and these restaurants rely very little on events at the MCI Center for driving patronage.

I have worked in hospitality for awhile, and I find that what distinguishes quality operations from those that struggle is a failure to focus on the guest and the guest experience. The restaurant industry is one of the most competitive retail categories but is still a retail category where independent businesses can thrive and the "barriers to entry" are surmountable.

There is a great resource for restauranteurs, a subscription website called Restaurant Owner, with scads of resources. Reading trade magazines at the very least (Restaurant Business, Fresh Cup, Specialty Coffee Retailer, etc.) is a good place to start because as I say "to stay the same is to fall behind, because your competitors are constantly improving and new places are always opening." If you don't go anywhere else, or read anything, how do you learn? 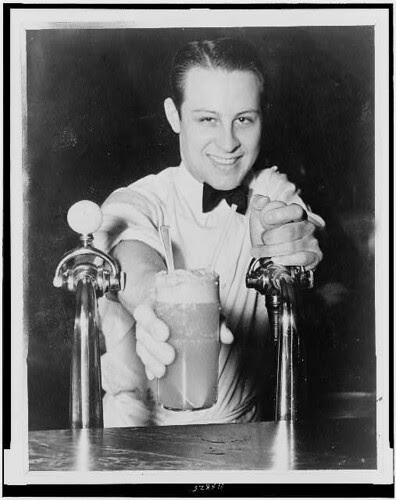 1. Understanding that you work for the guest, because after all, that's who pays everybody. (I know a restauranteur desperately trying to build his bar business, but he adamantly believes that "soft rock"--remakes of the Beatles and Supertramp, and the occasional Carpenters song is the music that should be played. Compare that to the jukebox at the soon to reopen Capitol Lounge.)

2. Listening to guests and employees.

3. Taking in and responding to this feedback. If you don't respond, listening doesn't matter.

5. Focus on what matters. Until you ensure that your production, service, and ordering and inventory systems work and are robust, gloss (such as balloons) is a waste of your time and energy.

6. Developing robust training and production systems. This sets you up for success by reducing the likelihood of error. The Restaurant Owner website is full of downloadable templates, manuals, and worksheets that can be customized. Weak systems put you behind before you even open your doors to today's customers

7. Having a sound business model. Understand your metrics and dayparts. Have a (business) plan based on reality and develop your business and marketing plan accordingly. It's possible to (re)build service and production systems if they are flawed. But a business model that can never yield profits is unworkable.

8. Perseverance and continuous process improvement. To repeat: to stay the same is to fall behind, because your competitors are constantly improving and new places are always opening. 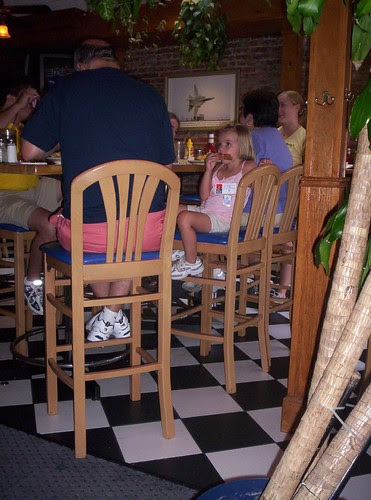