Batter up, "M Street Live." Is inauthenticity on the horizon for the Anacostia SE Waterfront? 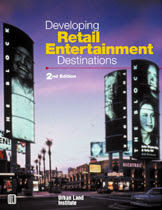 Published by the Urban Land Institute.

Just about two years ago at an H Street Transportation and Streetscape Study presentation, I erupted over some of the planned designs, referring to them as "urban brutalist faux shopping mall aesthetic."

In the furious round of emails afterwards, I discussed the historic architecture of the neighborhood, and why people felt the H Street corridor was disjoint -- because of the large proportions of new discordant boxy, somewhat urban brutalist buildings constructed since the riots -- and that it is the responsibility of trained professionals to explain this, not to come up with a bunch of architectural "pylons" designed to stitch the corridor back together. (My comments did lead to some redirection of efforts, although it took awhile for me to get back in the good graces of some of the employees of some of the agencies on whose toes I stepped.)

One of the things I wrote is something like "we are H Street, with a real history, not neighborhood nine at Potomac Mills."

Well, I don't know how much authenticity is likely. I'm guessing not a lot. David Montgomery's piece on the new Lucky Strike Bowling Lanes at Gallery Place starts with a brilliant line:

"In the corporate neon daylight of Seventh Street NW at night..."

that reflects the fact that virtually all of the businesses in the area immediately north of MCI Center are branches of national chains. (See "A Night in Washington's Fast Lanes.") It's pretty much the same for the Inner Harbor, home to one of Cordish Company's most successful projects, "PowerPlant Live." PPL appears to be the Faneuil Hall/Quincy Market of the first decade of the 21st Century--just like "Festival Marketplaces" were duplicated across the country after the initial success in Boston, now it's Baltimore-based Cordish's PPL, such as the iteration "Fourth Street Live!" in Louisville, which I saw last year. (Click here for the December calendar.) 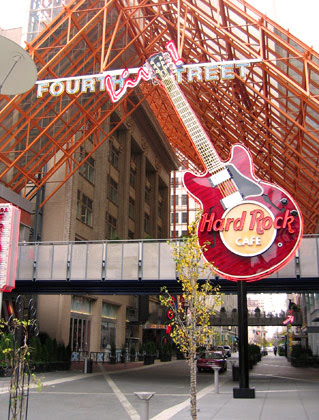 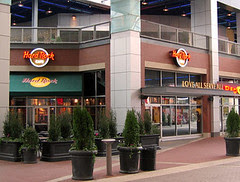 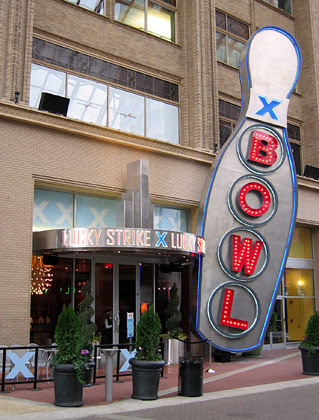 Each of these places tends to have one establishment that is a local experience of a type, i.e., a bourbon-oriented restaurant in Louisville, Clyde's or a BB&T bank at Gallery Place (I mean, isn't a North Carolina based bank kind of local?) + Chinese letters on store fronts, and a Phillips Seafood Restaurant in Inner Harbor (along with a California Pizza Kitchen and many other chains with no significant connection to the Chesapeake region). 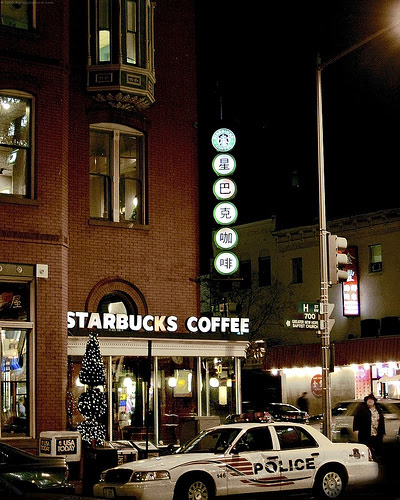 Flickr photo by Racing Squirrel. Is Chinese lettering enough to strengthen Chinatown's authenticity, or is more and real culture required?

And as I pointed out in this entry from July, "(Why aren't people) Learning from Jane Jacobs" about Harbor Place in Prince George's County, when it's all new construction, it's likely to be 100% chain.
_________
In the departments of both "full disclosure" and "be careful what you wish for," last December I sent a round of emails to various City Councilmembers about the importance of mixed-use projects in and around the baseball stadium, and I specifically mentioned Streuver Bros. Eccles and Rouse and a project they are doing in Nashville, as well as an award-winning project in Memphis by another developer. So it's possible that I had a bit of influence on this when the Anacostia Waterfront Corporation announced in August the plans for complementary development around the stadium site. But the lesson is that it's important to be very specific about what you mean. I thought I was. See: