Today's Examiner editorializes, in "Hospital deal should be DOA," against DC skipping the Certificate of Need process over the creation of a National Capital Medical Center, and mentions the likely negative impact on Greater Southeast Hospital, which is already located "east of the river."

Another issue that I seem to connect more than most to the health care discussions in DC are the financial problems experienced by Prince George's County Hospital in Cheverly (visible through the trees from the BWI Parkway). The Examiner also wrote about this last week, in the article "Pr. George s Hospital strapped for cash."

PG County Executive Johnson continually berates Dimensions Health Care for poor management, and maybe that's an element of the problem, but like the County's crisis in public safety, it's more likely to involve "systemic and structural" problems, in this case with the health care system and its failure to adequately care for chronic conditions, as well as the cost of catastrophic care for people without insurance.

Frankly, if this isn't a call for some regional thinking, I don't know what is. I would be inclined to support looking at the issues of PG Hospital, Greater Southeast Hospital, and Howard University Hospital and Medical School in a more connected fashion...

Yesterday, Paul Krugman wrote about health care in the context of federal policy and the discussion of the NYT coverage of the diabetes crisis in NYC. (See the Times articles "In the Treatment of Diabetes, Success Often Does Not Pay" and "Diabetes and Its Awful Toll Quietly Emerge as a Crisis.")

I mentioned that coverage last week, as well as Mayor Bloomberg's response--"Spearheading new campaign to slim down the Big Apple" is how the Express titled the AP story in today's paper (although I linked to the same AP story last Friday, in the entry "More about creating a 'community of wellness'"). 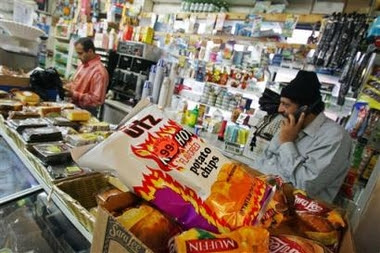 Ali, left, and Saleh wait for customers in the Tobacco Express deli in the Harlem neighborhood of New York Wednesday, Jan. 11, 2006. As part of Mayor Bloomberg's new initiative to get New Yorkers to eat better, the health department is launching a drive to improve the offerings on the shelves of the city's bodegas. (AP Photo/Dima Gavrysh).

Krugman's story, "First Do No Harm" isn't online for free, but here are the first few paragraphs:

It's widely expected that President Bush will talk a lot about health care in his State of the Union address. He probably won't boast about his prescription drug plan, whose debut has been a Katrina-like saga of confusion and incompetence. But he probably will tout proposals for so-called ''consumer driven'' health care.

So it's important to realize that the administration's idea of health care reform is to take what's wrong with our system and make it worse. Consider the harrowing series of articles The New York Times printed last week about the rising tide of diabetes.

Diabetes is a horrifying disease. It's also an important factor in soaring medical costs. The likely future impact of the disease on those costs terrifies health economists. And the problem of dealing with diabetes is a clear illustration of the real issues in health care.

Here's what we should be doing: since the rise in diabetes is closely linked to the rise in obesity, we should be getting Americans to lose weight and exercise more. We should also support disease management: people with diabetes have a much better quality of life and place much less burden on society if they can be induced to monitor their blood sugar carefully and control their diet.

But it turns out that the U.S. system of paying for health care doesn't let medical professionals do the right thing. There's hardly any money for prevention, partly because of the influence of food-industry lobbyists. And even disease management gets severely shortchanged. As the Times series pointed out, insurance companies ''will often refuse to pay $150 for a diabetic to see a podiatrist, who can help prevent foot ailments associated with the disease. Nearly all of them, though, cover amputations, which typically cost more than $30,000.''

As a result, diabetes management isn't a paying proposition. Centers that train diabetics to manage the disease have been medical successes but financial failures.
________________
There is a saying in the legal profession that "good cases make bad laws." Similarly, crises are opportunities to do great things, or continue to do the usual thing, but in a more hurried but likely to be fouled up fashion. As someone said about the Vietnam War (paraphrased), "the system worked, it just didn't yield the outcome people wanted."

Instead of focusing on hospital care, especially for those of limited means, let's focus on wellness and health care, and perhaps not just within DC. (Before jumping off a limb here, I'd want to know the demographics of the patients at PG Hospital, and how many of their patients herald from DC.) Build a health and wellness care system, and evaluate all the hospitals (and emergency medical response services) in that context.

Also, the photo below from NYC reminds me of an idea I keep putting out there in the context of redevelopment of the Florida Market area. I suggest adding a community nutrition education component for everybody, but also for people receiving food benefits (WIC, Senior Nutrition, others), where people could learn about healthy eating and food preparation in a place where there would be no stigma because everybody would be going to shop at the revitalized Florida Market because it would be a great, fun place to go, just like Eastern Market or Reading Terminal Market in Philadelphia, etc. 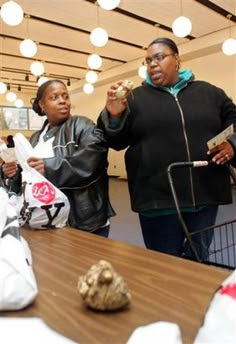 Annette Wilkerson, left, from Harlem discusses a celery root, which she never used for cooking before with Kim Huff, right, at the farmers market at the Harlem Healthy Eating event Sunday, Dec. 11, 2005. The Harlem Healthy Eating program is sponsored by the Promise Academy and involves students and their family members buying food from farmers and then giving it to the community members at discounted prices. (AP Photo/Dima Gavrysh).