Andy Young, Mel Gibson, maybe it's something about Los Angeles... 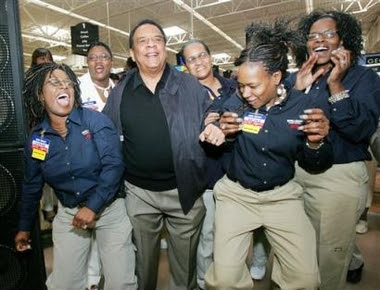 Andrew Young has taken a lot of flak (including this blog) about his shilling for Walmart. Yesterday, he resigned from this job, not because he thinks it's better for local economies to develop an independent business sector, but because of xenophobic language, according to the New York Times, in the article "Wal-Mart Image-Builder Resigns." From the article:

In an interview published in The Los Angeles Sentinel, Mr. Young said Wal-Mart "should" put mom-and-pop stores out of business in urban areas. According to Mr. Young, Jewish, Arab and Korean shop owners had "ripped off" urban communities "selling us stale bread, and bad meat and wilted vegetables."

"You see, those are the people who have been overcharging us," he said of mom-and-pop stores, "and they sold out and moved to Florida. I think they've ripped off our communities enough. First it was Jews, then it was Koreans and now it's Arabs."

The interesting thing is that this demonstrates that Mr. Young is not a sociologist and therefore is unfamiliar with the invasion-succession theory of neighborhood change. More importantly, it shows a real lack of understanding of the process of retail development and revitalization in our cities.

It's funny, because last night I was looking through a list of episodes from the tv show Hill Street Blues (because of the death of Bruno Kirby), and the list included a couple shows featuring Officers Hill and Renko dealing with the issue of a Korean run store in the neighborhood, the resentment on the part of certain quarters, how he encouraged the store owners to hire some local people, etc.

I remember those shows, just like I remember the demonstrations in New York City, as well as DC back in the day.

One of the articles in the Times (from the early 1990s probably, but it could have been the 1980s) about demonstrations back then quoted someone saying something along the lines of resentment, about how people had ideas about opening stores but never did and resented the people who did in fact open stores. (This is similar to the kind of resentment expressed in Shaw about people wanting to designate a part of 9th Street NW as "Little Ethiopia." See "Shaw Shuns 'Little Ethiopia'" from the Washington Post (and my series "Commerz in the 'hood").

Anyway, in the 1990s, I asked a prominent Reverend in the H Street neighborhood, a person who had also owned stores in the area, about why the stores weren't owned by African-Americans (he is African-American)? He said that people got tired of the crime and the issues, and coming into the city if they lived in the suburbs, so they sold their stores and opened up new places elsewhere, such as in Fort Washington (Maryland).

It's the invasion-succession theory to a "t."

Without a commitment to change, and an understanding of the process, the development of African-American- owned independent retail in the inner cities will continue to be stunted. 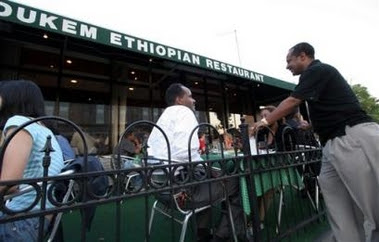 Tefera Zewdie talks to guests outside his restaurant Dukem. in Washington, Wednesday, Aug. 24, 2005. A new ethnic identity is taking root in a once-decaying neighborhood not far from the White House, where 10 Ethiopian restaurants are clustered together and dingy storefronts are now splashed with bright hues of blues, yellows and reds. (AP Photo/Lauren Victoria Burke)

As I just said to someone who wrote me from the UK, successful urban revitalization (regeneraton in the UK) is all about connecting and connectedness. Given our resource disparities, we can't afford to waste time, people, and other assets.