In the past, I've repeated numbers presented by Jeff Tunlin of Nelson Nygaard at a conference in DC about the transit capacity of urban roads. For one lane of road in one hour, you can move:

This past weekend, I volunteered at the Sierra Club/Arlington Coalition for Sensible Transportation booth at the Arlington County Fair. The ACST people were working on their campaign for better management, not widening of I-66, and the Sierra Club focused on their campaign to add transit to the Wilson Bridge, by connecting the Green line at Branch Avenue to the Yellow Line in Alexandria via the bridge, and were collecting post cards to send to Governor Kaine to put this on the transportation planning agenda for the State of Virginia.

In spouting those mode capacity figures, while talking with the people who ambled by (and being questioned about the numbers!), I realized that the vehicle capacity numbers I knew weren't relevant to the freeway part of I-66 (or the Wilson Bridge).

Not wanting to buy the Highway Capacity Manual, I rooted around the net to find the relevant data. This comes from the State of New Jersey Road User Cost Manual.

Normal Capacity is the maximum traffic volume a facility can handle under normal roadway conditions. Table 3.1 provides the ideal capacity a facility type can handle. Chapter 3 of the Highway Capacity Manual (HCM) points out that these capacities under ideal conditions must be adjusted for such real world factors as restricted lane widths, reduced lateral clearances, the presence of trucks and recreational vehicles, and the presence of a driver population unfamiliar with the area. The normal capacity of the facility is used during the non-work zone hours when all traffic lanes are open. 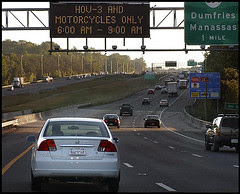 Bill Spencer of North Stafford, Va., drives his 2002 Honda Civic Hybrid on to the HOV restricted lanes May 22, 2002 near Dumfries, Va. The state created the exemption for hybrids in the mid-1990s to encourage sales of the fuel-efficient cars and to promote use of the HOV lanes, which were underused, said Lon Anderson, a spokesman for AAA Mid-Atlantic. But a recommendation from a state task force, and an opinion from the Federal Highway Administration, may be slamming the brakes on the use of hybrids in the HOV lanes. (AP Photo/The Free Lance-Star, Joe Amon)

BTW/2, you can also see why allowing Single Occupant Hybrid Vehicles in the HOV lanes is counter- productive. (See "UPDATE: With U.S. Allowing Hybrids in HOV Lanes, States' Battle Is Just Around the Bend," from the Washington Post.)