Thinking about commercial districts in terms of segments and phases

This is something I have been thinking quite a bit about lately.

First, in terms of dayparts, i.e, breakfast, lunch, happy hour, dinner, late night. (This isn't about food so much, think about this in terms of working to build activity in your commercial district at different times throughout the day.)

Second, in terms of age demographics, from youth to seniors.

Did you see the set of articles in yesterday's Post about teen consumers?, "As the Kids Go Buy," subtitled "61 Teens Descend on Tysons, and We're There to Watch." The article focused on teens going to Tysons Corner to shop. How do we make our traditional commercial districts equally fun and cool?

When I was a pre-driving teen, we would bicycle to Birmingham, Michigan, a traditional commercial district that then was anchored by two department stores and had great vital streets. I don't remember what we did, went to the athletic store to look at running shoes and stuff I suppose...

Another way to think about commercial revitalization is in terms of time and phases.

Your first phase is around restaurants and/or nightlife. People clamor for a variety of other retail, but usually you don't have the patronage of a place--pedestrians, shoppers, positive activity on the street--to support the kind of retail people say they want, such as toy stores and bookstores.

Looking at the newest retail opportunities publication published by the Washington DC Economic Partnership is quite telling. If you poke through the demographic pages on each neighborhood, the differences between neighborhoods in terms of population density and household income are dramatic. All neighborhoods are not equal when it comes to the potentiall for retail revitalization. And you have to look at building demand in part by attracting shoppers-customers from outside the immediate area.

E.g., the newest economic study from the Americans for the Arts finds that the multiplier effect of an arts patron is just over $27--the amount of money spent on other goods and services in association with a particular instance of "consuming culture."

Speaking of this is the article in the Express last week on H Street nightlife. (See this blog entry for a discussion about the change in H Street over the last two years, "An Interesting Look Back in Time.")

Relatedly, in "Arts Space in Brooklyn to Get New Digs," the New York Times reports about how an art space and bar known for sparking some of the revitalization of the Williamsburg district in Brooklyn, has been recruited--receiving more space for half the rent--to another Brooklyn neighborhood, Dumbo, looking to attract new patrons-customers-shoppers-residents. 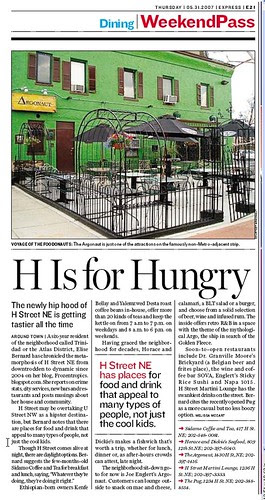