Bicycling as a legitimate and viable form of transportation A ride around the Eiffel Tower is a perfect use of Paris' bike-share program. Associated Press photo by Laurent Baheux

1. See "To Ease a City’s Traffic, Shifting From 4 Wheels to 2," from the New York Times. From the article:

On many mornings, as commuters pack themselves into subway trains and drivers squeeze onto the streets, Janette Sadik-Khan, the commissioner of the Department of Transportation, rides her bicycle to work.

2. I didn't know, but Annapolis has a bike loaner program during high tourist season. From the Anne Arundel Extra section of the Post:

Free Bike Program Is to Continue
The City of Annapolis's free bike loan program, Free Wheelin', will return next summer, according to city officials. About 70 bike enthusiasts, both tourists and local residents, took advantage of the program in its first summer. Many boaters used the free bikes when they docked at Annapolis Harbor to run errands and explore the town.

5. This roundup from the Boston Globe, "Pedal pushing: Menino mounting bid to make city a bicyclist's dream," has a number of associated features including a video story and this great graphic, which sets some stretch goals for what other cities should try to achieve.

Clicking on the graphic takes you to the full sized original. At the bottom it lists reasons to ride: that it costs over $7,000 per year for a car (when you're paying it off), that many people are overweight, that most trips are under 5 miles. 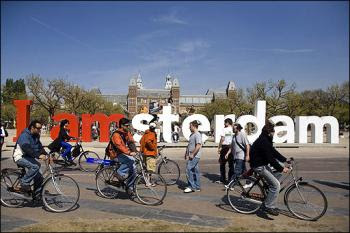 6. Seemingly, this article "No Vélib’ in Amsterdam," implies that Amsterdam is not bike friendly. But an article quotes an official as saying most Amsterdammers have bikes already. See also "The Dutch government takes a stand -- against cars, for bikes," from the Agency France Press. From the article:

The Dutch government has taken a trend to promote eco-friendly cities a step further than its European neighbors by announcing firm measures to discourage cars and driving. The plan was outlined in the 2008 budget presented this week, and the capital Amsterdam -- a leader in the drive -- and other Dutch cities will use a "no car" day on Sunday, an annual event, to press home the message.

In the traditional speech from the throne read out by Queen Beatrix, the centre-left cabinet said it would raise taxes on diesel fuel and vehicles using it. Laws are also being drawn up to make taxes dependent on how much pollution a vehicle emits: the more polluting, the higher the fee. ...

Amsterdam, where half the residents do not even have a car, is also hatching other plans to clean up the air and unblock congested roads, including a tax on sports utility vehicles (SUVs), Jeeps and other big cars that run on diesel fuel. Parking meters will be connected to vehicle tax records and drivers will have to punch in their license plate numbers. The price of a space will be calculated on how much pollution the car creates.

"The technology is available," Tjeerd Herrema, an Amsterdam city council member in charge of transport, told the Het Parool daily. He wants to introduce the system in the course of next year.

To back the measures, Amsterdam will build large car parks inside the city for residents and just outside the ring road for visitors, linked to the city's "park-and-ride" public transport system. Plans call for doubling spaces in the outside lots to 2,300. At the moment, visitors pay 5.50 euros per day to park and get two free public transport tickets, which the municipality wants to increase to five per car.

Inside Amsterdam it now costs 3.90 euros an hour to park in the city centre from 7 am to midnight everyday, except Sunday morning during church service hours, but prices are set to go up.

The city also wants to improve public transport and increase the number of green spaces in the centre, and Herrema is pushing for trams and buses -- which now stop around 1 am -- to run all night....

But Amsterdam has not forgotten its numerous cyclists, who are almost as much of a tourist attraction as the 17th-century canal houses. The city is setting aside 70 million euros for the capital's bicycle riders over the next four years to pay for improving bike lanes, creating more bicycle parking spaces and cracking down on bicycle theft.

7. Thanks to Chris van der Oord for this bike photo, from Henry Cutler's Workcycles. Imagine FedEx or UPS doing downtown deliveries with such a vehicle. And I am sorry I missed the Oktoberfest celebration there. Keep up with biking in Amsterdam with Henry's blog, Bakfiets-en-Meer. 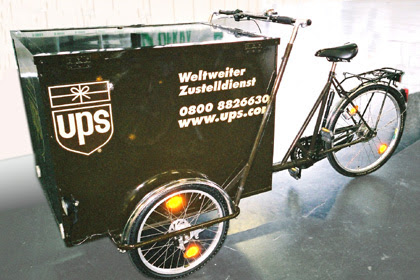 8. Where I have always argued that relying on bicycling is a hindrance to dating, according to the Guardian, in "Vélib triumph: Parisians are taking to the city's new 'freedom bicycle' scheme - if only as an aid to romantic encounters," that is not the case. From the article:

Parisian bachelors (célibataires in French) who are polishing their seduction skills around vélib platforms are now called vélibataires. A damsel in distress will always find her Fred Astaire to help adjust her seat or unlock her vélib. Is this the return of gallantry and old-fashioned civility in the streets of Paris?