Potomac Express concept design
Originally uploaded by rllayman
(Although I prefer RACER, for Railroad Authority of the Chesapeake Region.) Image from BeyondDC.

DC1974 calls our attention to this article from the Oakland Tribune, "Long-haul intercity trains can hardly meet demand," about the significant success of the intra-California railroad system, a system that has been created because of a bond initiative approved by California voters in a referendum.

The Corridor and California's two other intercity rail lines, the San Joaquins from Oakland to Bakersfield and the Pacific Surfliner trains from San Diego to San Luis Obispo, carry 20 percent of Amtrak's nationwide passengers.

While ridership on those California routes has grown 43 percent to 5 million annual trips in 2007, vehicle miles in the state have gone up only 8 percent, and the population has risen 11 percent. State funding for this fast-growing sector has not kept pace, however....

A daylong series of meetings and events calls attention to the fact that as travelers and commuters clamor for seats on their trains, officials struggle to expand service to meet that demand.

Since a voter-approved bond jump-started the Capitol Corridor in 1990, the line has received only sporadic capital funding from state coffers averaging only about $578,000 a year.

"We have worked very hard with the dollars that have been given to us," said Forrest Williams, a San Jose city councilman who chairs the joint powers authority that governs the Capitol Corridor, "but we have reached that point where we cannot expand any more" without compromising service.

Some relief is in the works from a new state-wide transportation bond, which will pump $400 million into intercity rail improvements. Last year the Legislature budgeted $187 million of that, of which $150 million will pay for six new trains — two for each of the three rail routes. 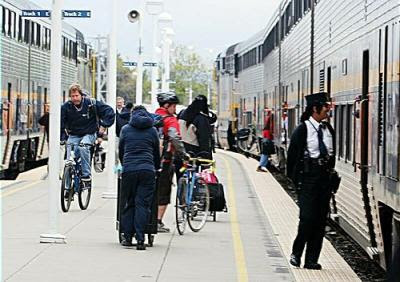 Capitol Corrider passengers arrive and depart from the Jack London Square Amtrak station in Oakland, CA early Thursday morning, Feb. 21, 2008. (Laura A. Oda/The Oakland Tribune)
-------
This is the model for the idea of a combined MD, VA, and DC railroad system (another model is the railroad side of the Massachusetts Bay Transportation Authority, in NJ and NY, the systems are separate, although SEPTA provides some service into NJ, and NJ Transit provides service into NYC).

In the model, first proposed by Beyond DC, connections are provided to WV (as is done currently by MARC), PA, and DE.

Additionally, the State of Virginia has had plans for some time to improve the passenger railroad capacity between DC and Richmond, to in effect make Richmond the new southernmost terminus of the Northeast Corridor.

You could also think of this as beginning to create the Southeast Corridor line, from DC to Hampton Roads, and then beyond into North Carolina. This would go beyond the diagram outlined by Beyond DC, below. 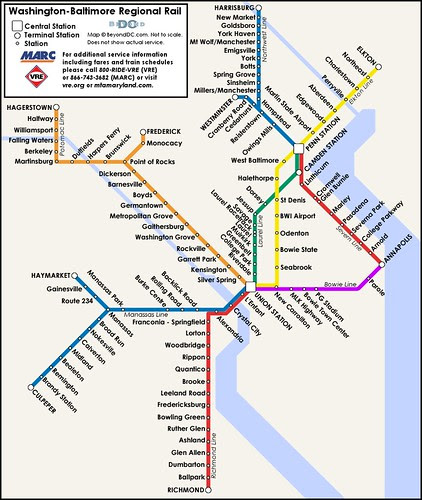