Rethinking proof of concept for streetcars in DC

Portland Streetcar- 2
Originally uploaded by urbanista_1
One of the biggest problems to overcome with regard to the widespread adoption of streetcars in DC is the issue of overhead wires. Currently, federal law bans overhead wires on streets in the L'Enfant City (the core of Washington DC, bounded by the Anacostia River, Florida Avenue, and the Potomac River, but including Georgetown).

Even main thoroughfares such as Georgia Avenue NW outside of the L'Enfant or "Old" City don't have utility lines/poles on the street side for the most part.

In the old days, many streetcar lines had underground wiring, including in DC. I am not an engineer, but there is something about physics and geology and the constant pressure on the tubing holding the wiring. Pretty much the technology doesn't exist anymore, although Alstom is doing some use of a similar kind of technology in Bordeaux, France, however, they aren't interested it seems in porting this to North America, especially because of the use of salt on the roads during winter (not done much in Europe), which would corrode the underground powering infrastructure and do bad things.

While it is true that DC's Department of Transportation will be introducing streetcars to Anacostia, at the same time, East of the River isn't top-of-mind when it comes to awareness.

I think that DC should install one of the streetcar lines in upper NW-NE in the old Washington County, where the ban against overhead wiring doesn't exist.

Cities like Philadelphia and Portland (the Flickr photo in this entry is from Portland) demonstrate that the overhead wiring isn't too obtrusive.

This is one of those issues where there are tradeoffs. I think the city's livability and competitive advantage is dependent on quality transit expansion.

At the same time I am a historic preservationist and committed to a quality and attractive built environment, which includes what can be very unsightly utility pole and wiring infrastructure.

So how do we deal with this?

Using the design methodology, let's prototype it in a place where people can see and use it. And figure out if like Bordeaux, it would be possible to do a short stretch in the "Old City" with underground wiring with Alstom--DC ought to be a testbed for innovation, rather than the place where politics is used to prevent "creative destruction."

Richard Moe, president of the National Trust for Historic Preservation, says about preservation, that in the end no one ever really criticizes saving a building after it's been saved.

Maybe we really need proof of concept for streetcars for people to jump on the bandwagon and demand their introduction.

Then we can deal with whether or not changing the federal law to allow a slight exception for streetcar overhead wiring in the Old City is worth doing. 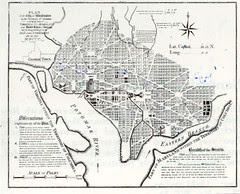 This area of Washington DC is referred to as the "L'Enfant City" or the "Old City," as it was designed by Major Pierre L'Enfant in 1791. This area is the area (including Georgetown) for which there is a ban on overhead wiring.