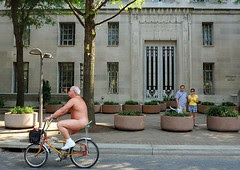 A man rides nearly naked down Pennsylvania Avenue towards the US Capitol during the US version of the World Naked Bike Ride to draw attention to oil dependency. Picture: AFP / GETTY

Last week, I wrote a bunch of blog entries about wasted opportunities in various Washington Post stories. This week, it's the Washington City Paper's turn. One of their stories from last week's edition took many pages to barely explore the issue of bicyclists wearing helmets, see "What's Your Excuse?" Sadly, the City Paper is most happy being snarky in its articles, rather than taking a step beyond conventional wisdom.

I agree that bicyclists should wear helmets. Like many people, for a long time I didn't, because my helmet had been stolen from a table at the MLK Library, and I didn't get around to buying a new one. I don't ride off-road, I don't ride very fast, etc. So I justified not wearing a helmet. (And despite what the article says, you can sweat inside the helmet, your hair itches, etc.)

I got religion after a "love tap" from a car totalled my bike, banged me up more than a wee bit, but thankfully nothing happened to my head. Since there is a lot special in my brain, it would be terrible for it to be banged up, in a way comparable to some of the sad stories recounted in the article.

The funny thing is that helmets are a big source of irritation between European cycling advocates and U.S. cycling advocates. Because most European riding is in cities, there can be so many bicyclists, and because the speeds that cars drive at are significantly less in urban areas, riders there do not wear helmets, and for the most part are safe doing so.

In the U.S., what bicyclists don't realize is that the issue isn't about us, it's about 2,000 to 4,000 pound cars, how fast they move on the city's streets, and if they hit us, not if we ride and obey all the traffic rules.

But the Europeans often make fun of us for wearing helmets (and for bicyclists wearing fancy performance cycling clothing). I had to explain on one international e-list about basic physics, that it isn't about getting bumped and "plopping down" (he said falling on your ass). I said it's basic physics, that a rider gets propelled off a bike (I've fractured ribs because of this...) depending on the direction that the car is going in when it hits you, the streets are very hard (as are car hoods), and the cars move quite fast.

The City Paper article would have been better had it been motivated to go beyond snarky, and discussed the difference between riding in the U.S. and Europe, and had they interviewed bicycling experts beyond head injury types, such as Rutgers University professor John Pucher (see "John Pucher – the Bicycle Scholar" from Momentum Magazine and the full paper, "Making Cycling Irresistible: Lessons from the Netherlands, Denmark, and Germany") or Anne Lusk, a researcher at Harvard's School of Public Health (see this column by Neal Peirce, "A New Two-Wheeled Course?" about cycle tracks and Anne's work). 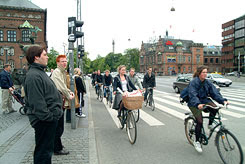 Bike helmet more benefit life is not risky so every time helmet is require for bike ride.