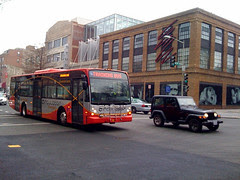 The trouble some times with writing the "truth" is that it restricts your access to policymakers.

The solution to ineffective transportation routes is to address the reasons why the routes are ineffective.

Generally, bus routes that mirror existing service without providing much in the way of new or special service are a waste of money.

Similarly, routes that are created with vital flaws are a waste of money.

This bus route is designed to placate Capitol Hill business owners that think they aren't getting business because of lack of transit access, despite the subway stations along the route (including Capitol South), and the bus service on Pennsylvania Avenue (30s line) and 8th Street SE (90s line).

It has pathetic ridership.

So rather than just kill the route, it is to become a "Circulator" route.

The Circulator buses aren't used as much as they should but they are branded and the buses are new and painted well. So most everyone thinks that a "Circulator" bus -- with frequent service, at least every 10 minutes and good painting scheme -- is the solution to any bus route that is barely used.

The new Capitol Hill circulator will be a $750,000 waste of DC tax money--except maybe on baseball days, but maybe not even then... See "District adds new D.C. Circulator party routes" from the Washington Business Journal for the dollar figures.

This route is almost, but not quite a good idea. There probably is a need for a circulator bus between Woodley Park, Adams Morgan, and Columbia Heights, sort of like the old 98 bus, which was the least used, least effective local service bus route in DC--a bus route that completely duplicated the route of the 90s buses.

But there isn't a need to route this bus from that area to downtown along 14th Street, to make it a "Circulator" bus.

To speed the routing in those areas, I suggested that the buses could run the route clockwise and counterclockwise simultaneously, that way people could get around in the area more quickly.

It would also function more like the "tertiary" bus service I suggest -- intra-neighborhood transit designed to move people to and from commercial districts, grocery stores, and subway stations in their neighborhoods.

(See the discussion in this blog entry, "Metro and DDOT to Host Public Meetings on Neighborhood Circulation Study : Residents Encouraged to Participate in Effort to Improve Transit Connectivity" for a discussion of my typology for thinking about transit in DC.)

Unfortunately, everyone thinks the DC Downtown Circulator is a model for doing bus service, without thinking through what works, what doesn't and why, and what to do in other places, in order to develop more effective bus service.

See this article from the Pittsburgh Post-Gazette, which almost makes the same mistake, but focuses rightly on creating linked transit services, relying on strong trunklines for longer distance sections of transit service. DC has the subway system to provide this kind of service to most areas of the city from Downtown.

In short, Adams Morgan-Columbia Heights should have an intra-area circulator, relying on the subway stations to move people to and from the Central Business District.

And back to the N22, well, until there is demand for this service--and now there isn't--don't waste the money. Put the money into upgrading other bus service in the city.

How to best use the ideas from the Circulator concept 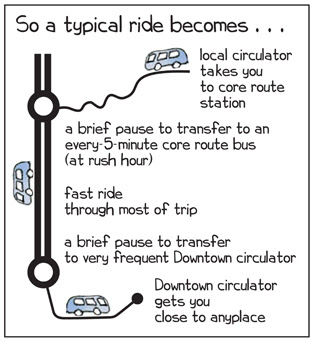 1. Short local circulators with many stops. (I call this tertiary transit service.)

Images from "The Next Page: Shaking up mass transit the Brazilian way," Sunday, January 28, 2007, Pittsburgh Post-Gazette, by Robert Firth and the staff of Informing Design.