Will streetcars really return to the Capital City? 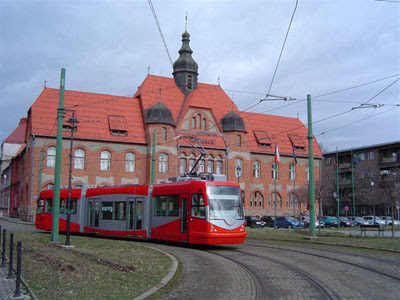 Stored by the manufacturer in the Czech Republic, DC streetcars wait to be used. DC Office of Planning photo.

-----
Note: I added a couple important paragraphs on the importance of proof of concept to provide the impetus to deal with the wire issue. And on the map, I changed the colors of five markers to red or green to reflect which subway line they are on.
-----

On the WashDC_Metro e-list, Chris writes in frustration, in response to the WTOP article, "DC readies for streecar return":

I'm sick of reading how streetcars are "coming". No one has a solution to the overhead wires ban, and no one at DDOT or WMATA seems interested in developing a solution. The network is dead in the water. In 15 years maybe we'll have one orphan line in Anacostia at enormous cost that connects very little.

To me, "the solution" is pretty simple. Install the proposed crosstown line (conceptualized during the DC Alternatives Analysis but taken out of the initial set of lines as listed in the DC Comp Plan Transportation Element in 2006) from Woodley Park to Brookland (separately I have suggested this line could be extended as a Y from Woodley to Georgetown and to AU, and from Brookland out Michigan Ave., Queens Chapel Rd., and Adelphi to UMD and called the University Line). 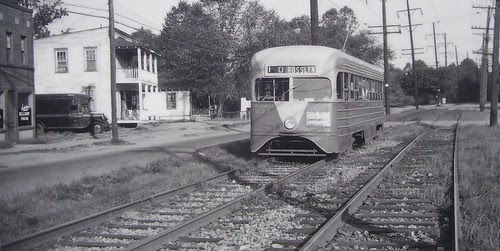 A line placed solely within the boundaries of "Washington County" isn't affected by the ban on overhead wires, which covers only the "Old City" or L'Enfant City + Georgetown. 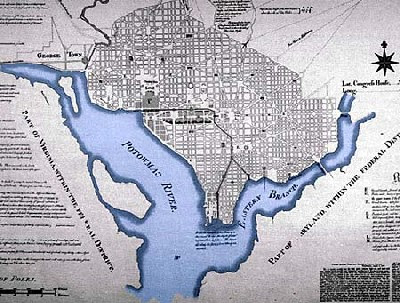 The L'Enfant City boundaries, within the District of Columbia.

More importantly, this line would be visible and used, unlike the Anacostia line (which is an example of how when allowing the good intentions of equity-based objectives to trump solid planning objectives leads to a cascading set of satisficed outcomes).

Proof of concept and experience with this proposed line would likely provide the impetus to expand and develop more streetcar lines in the city as well as get stakeholders, including Congress and the National Capital Planning Commission, to deal with the overhead wire issue. (Personally, I prefer no wires, but I am willing to accept wires for streetcars, as the only exception to the law. If you see streetcars in various places, the overhead wire infrastructure isn't that unattractive. Still, we'll see what happens with the new no-wire Flexcity technology from Bombardier.)

Despite all the talk of DC being a "world class" city, DC is a pretty conservative place. People here need to be able to see something and experience it before they are willing to commit to doing something the least bit innovative. (And hey, streetcars are popping up everywhere. It's a stretch now to consider adding streetcars to a region's transit system as significantly pushing the envelope.)

Here's a badly drawn Google Map version of what I am talking about in terms of a crosstown line.

It would also provide economic reasons to intensfy land use development along Queens Chapel Road in Hyattsville, Avondale, and Mount Rainier and especially in the vicinity of the West Hyattsville station, which has a model transit oriented development plan, which has made almost no headway in influencing positive land use changes in that area. 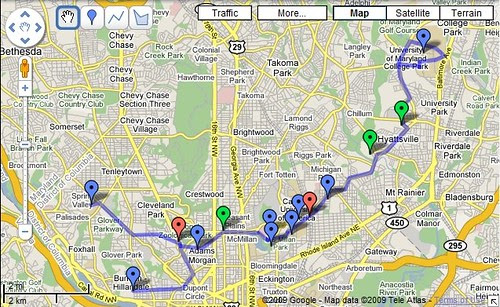 And it would serve as "advertising" and "proof of concept" for streetcars in the city and that would likely significantly propel forward the streetcar agenda more generally.

I think the DC Alternatives Analysis (2003-2005) was a good effort, but now I think it could be revised. For one, it needs to be analyzed within a more defined service hierarchy (the DC primary, secondary and tertiary transit networks that I have defined previously) and depending on the possibilities of routes in terms of ridership and distance considerations, it might be necessary to think about some routes as light rail rather than streetcar.

Furthermore, the DC Alternatives Analysis was expansive but parochial. It only looked at DC proper, and it really should look at the issue of surface-based fixed rail transit beyond the borders of Western and Eastern Avenues. For example, by not looking beyond the borders of DC in a significant fashion, commuter traffic into the city on major routes such as Wisconsin Avenue, Connecticut Avenue, 16th Street, Georgia Avenue, Rhode Island Avenue, and Michigan Avenues cannot be interdicted in a substantive way through transit. 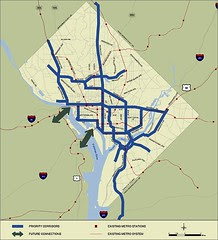 To solve some of DC's "congestion" problems, we need to plan jointly with Montgomery and Prince George's Counties. (E.g., elsewhere I have suggested a streetcar or light rail line on Rhode Island Avenue. Various people have suggested that rather than starting at the Rhode Island Metro Station, such a line could start at Dupont Circle, and rather than end in College Park, it could go all the way to Laurel.) 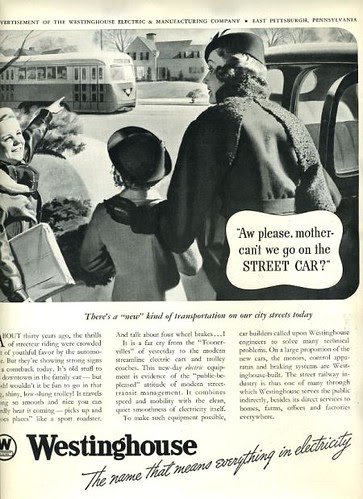