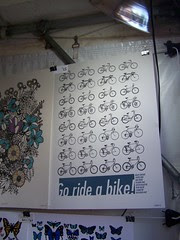 Go ride a bicycle poster, Brainstorm print and design
Originally uploaded by rllayman
in a booth at Baltimore's Artscape this past weekend. The website for the producer.

Geoff also sends along this ad fronting the classified newspaper section of the Brunswick News in Georgia. Traditionally, one of the largest sources of classified advertising for newspapers has been local automotive dealers.

So newspapers have been taking it from all sides--rise of online news sources, decline in subscription rates, decline in job advertising, decline in the number of local retailers, consolidation of retail and service businesses yielding fewer advertising accounts--e.g., from Woodward & Lothrop and Hechts to Macys in terms of the local department store scene--and the decline in image advertising and other promotion by so-called "national" advertisers, which was charged at a significantly higher rate. 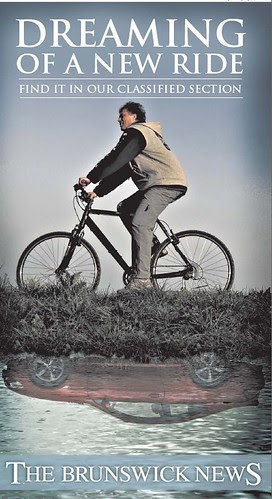 I don't remember the numbers anymore, but at one point a good 15% of the economy was related directly or indirectly to automobile purchases and maintenance. (As a student for a time I worked at the Survey Research Center and one of the studies we called around the country on was the Survey of Consumer Attitudes. A big chunk of the questions were about cars, and not just because we were calling from Michigan.)

I haven't read much about "steady state economics" which is something that EE mentions from time to time, but in a compact development scenario--"the city of short distances" I saw it referred to as recently--far fewer cars are required, changing the nature of the economy significantly.