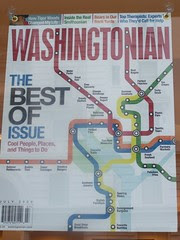 Promotional sign for the Washingtonian magazine
Originally uploaded by rllayman
I like this cover because I think it is an excellent illustration of my point that we need to plan for transit not as a special thing that you use to go to and from work, but as a part of your every day life and lifestyle.

I call this "Complete Places" but recently I saw a mention of this idea referred to as "the city of short distances."

In any event, it's about compact development and mixed use places, where amenities (commercial and civic) are located within neighborhoods or are close by (not too far from neighborhoods) and reachable by transit.

It's a different aspect of the recentralization discussion in Belmont's Cities in Full. The advantage of recentralization of assets, connected by high capacity frequent transit is that it is relatively efficient to provide and support.

Placing activity centers about willy-nilly, with little consideration of how to optimize travel to and from these centers is a kind of rejection of the reality of how center cities were first planned (cities were planned to optimize walking, transit and bicycling as cars didn't exist or when they were first introduced, were not widely used).