In response to today's Dr. Gridlock column in the Post, which reports on increased rider dissatisfaction due to the post-crash service slowdowns as a result of persistent circuit failures and/or continued investigation of the crash by the National Transportation Board, I am reprinting portions of two entries, one from 2005, and one from 2006.

The basic point is that you have to market to the riders, rather than just take them for granted. Ultimately, transit riders are voters, and shape the broader environment that WMATA operates within.

The cobbling of blog entries below doesn't take up the idea of crisis management and communications and what successful organizations need to do in such situations, although there has been plenty written about it, including case studies of Johnson & Johnson and Tylenol tampering. Think about J&J's success, even though their response wasn't perfect, versus the failure of other businesses such as Enron, EF Hutton, or that company based in Virginia that made contaminated peanut butter.

If you look at this case study on Tylenol (from a Department of Defense seminar on crisis communications) they discuss various strategies for dealing with the various publics of the organization and maintaining trust in the organization on the part of outsiders.

WMATA is not doing this adequately. At the bike presentation last week, I had a conversation with someone on the Riders Advisory Council, and it was clear that she had a vastly different understanding about what the real problems were that led to the crash than I (maybe I have information processing difficulties but I don't think so), and a focus on what I would consider to be somewhat superfluous issues (whether or not the driver was tired and this slowed her response in engaging the emergency brake--at 59 miles per hour, a few hundred feet is not enough to stop a 6 car train).

WMATA has always had a problem of a militaristic organizational structure and system of command-control that derived from how the organization was first led by a former General of the Army Corps of Engineers.

So there isn't a lot of empathy expressed by the organization. People give stock answers. And often the answers leave much of the original question unanswered. Granted lots of government agencies work the same way. But WMATA has 1.2 million rider/customer/stakeholders/voters every working day. They have to be marketed to and managed in ways that bring them in as equal partners.

A long time ago, I read the book Strategic Marketing for Not-For-Profit Organizations by the U of Michigan Social Work professor Armand Lauffer. One of the concepts that has stuck with me over the years is that organizations have three publics:

Transit marketing, promotion, and publicity has at least two different segments of "output publics" -- (1) the people who are interested and involved in the planning issues around transportation and (2) the people that "consume" transit services. [From "Making Transit Sexy."]

Today's Sprawl and Crawl column in the Examiner [note: this was in January 2006 and the article is no longer in the Examiner archives], written before Richard White's resignation, about the difficulty of the job, that by and large White has done a decent job, and the over-involvement of the Board of Directors in day-to-day operations.

It does make me further think about my "dream" of re-writing (or producing a new version) of the textbook Marketing Public Transit, perhaps with these images on the cover: 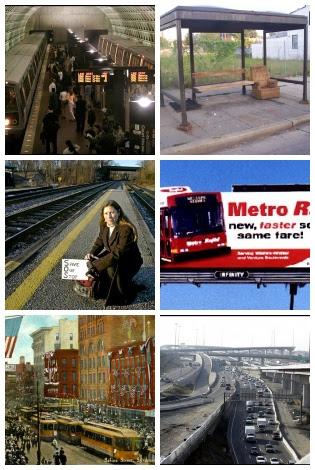 One of the ways I would structure the text is along the lines of the input, throughput, and output publics framework laid out by Armand Lauffer in his textbook Marketing for Not-For-Profit Organizations.

Transit marketing must be reconceptualized along the lines of this framework.

One problem with WMATA, and these problems start at the top, is a tin ear in terms of listening and relating to the public. They need to rethink their public communications efforts, and develop different kinds of campaigns according to the type of public they are attempting to reach.

Anyone who took expository writing in school remembers those lessons about "defining your audience." The one problem with those classes is we didn't learn about how to categorize audiences more specifically. For nonprofit and government organizations, Lauffer's work is particularly useful in this regard. 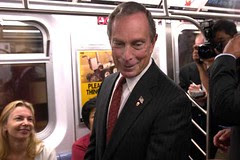 Richard White didn't have much of a public persona, although he dealt mostly with high-level businesspeople and other government public officials. Since elected officials comprise a majority of the WMATA Board, and they are responsible, nominally, to the public, even appointed officials in high-profile government agencies perhaps need to consider how "public communications" activities are an increasingly important part of their job... if they want to keep their job (on the other hand, look what happened to David Gunn of Amtrak...).

At the same time, marketing isn't really about "selling" only what you want to sell. It is about responding to the market(s) and segments, leading market(s), and often balancing conflicting objectives (such as elected officials that want to keep taxes low, citizens who want more transit, and operations personnel who are looking for more financial support to maintain deteriorating infrastructure).

Public transportation systems have to sell use as well as funding, since farebox revenue only covers a portion of current operations, and nothing towards expansion (and WMATA is the number one transit system in the U.S. in the percentage of farebox revenue collected). Funding has to be sold to non-users as well as users, and of course, to public officials.

It's a tough job in any community, particularly this one, as Steve Eldridge, the Sprawl and Crawl columnist for the Examiner, so rightly pointed out in today's column.