(Has been discussed here from time to time.) 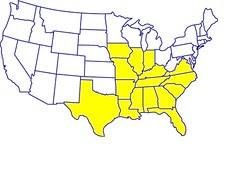 Regions Bank operates in the states demarcated in yellow.

DK if you watch the right tv channels featuring commercials from Regions Bank, which is based in Alabama, and has branches in 16 states, including Virginia, although the closest branches to the DC Metropolitan area are in Richmond--so I am not likely to open an account there anytime soon.

Most Regions Bank tv commercials feature bicycling (green bikes always, green must be their corporate color) in a positive manner. Although the question must be asked, do their bank branches really have bicycle racks as depicted in the following commercial.