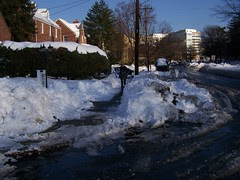 Mother carrying stroller w/baby because the uneven removal of snow made rolling the stroller impossible on Bradley Boulevard in Bethesda, Maryland.

1. Residents with corner lots have the "burden" of needing to shovel snow on two faces. It's a big responsibility. But it comes with the property. Too many people shirk this responsibility. 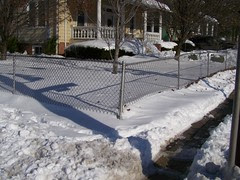 The front walk of the house on Sheridan Street at 3rd Street NW. The sidewalk on the 3rd Street side of the house.

Yesterday, after business at my bank, because the weather was so nice, I decided to walk from Bethesda to Friendship Heights, along the west side of Wisconsin Avenue. There were many examples of people shoveling their front walk and shirking their responsibilities on the Wisconsin Avenue side of their properties. Of course, this is also a problem in Takoma DC and Manor Park, as I discovered walking to the subway station yesterday.

2. Similarly, residents with corner properties ought to shovel a path from the sidewalk to the street. (I used to do this when I lived on Capitol Hill.) 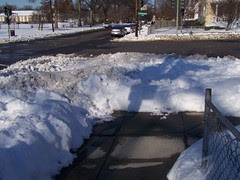 Northeast corner of 3rd Street and North Dakota Avenue NW. (The corner building is an apartment building managed by the Barac Company.)

3. Or if they live next to a mid block alley they should shovel a path across the alley to the next house. (I used to do this when I lived in the H Street neighborhood.) 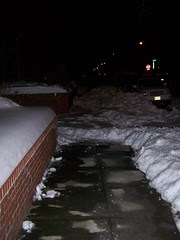 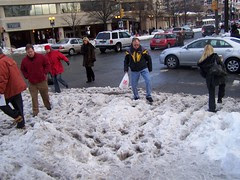 5. And it occurs to me that it might be as part of "Transportation demand management planning" that businesses might be required to demonstrate that they have snow removal plans because when they don't, it can create traffic problems.

For example, I was "impressed" that the Hampton Inn at the corner of Massachusetts Avenue and 6th Street NW did not clear the snow in front of their entrance, where there is a lane for cars to load and unload. So instead of guests stopping in front of the hotel to drop off their luggage, they pulled into the entranceway for the garage to drop their luggage off on the sidewalk, blocking the sidewalk for pedestrians, and for other cars going into and out of the garage. 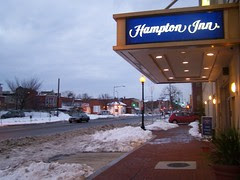 And why wouldn't apartment-condominium buildings like 555 Massachusetts Avenue deem it important to clear the snow from their driveway for cars, but not from the sidewalk in front of their building? 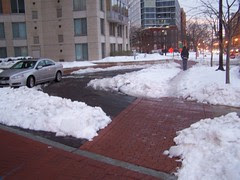 6. And just like there are Walk to School zones, there should be snow removal plans for "Walk to School" and "Walk to Transit" zones, including bus stops. Note that this seems to be a problem throughout the region, in Montgomery County, Baltimore City, and Baltimore County too, not just DC. 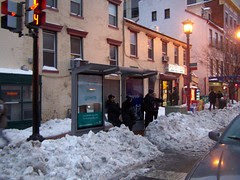 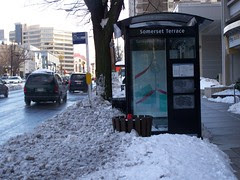 7. And instead of WMATA having to shut down bus service, I have wondered for quite some time why bus routes are not designated high priority for snow removal, in order to maintain service? See the Examiner story, "Metro pulled back in weekend storm, after 2003 mistakes." From the article:

Shortly before noon Saturday, the agency decided to halt buses and rail service to its aboveground stations by 1 p.m. "We could not wait any longer because we could see the weather was getting worse," Taubenkibel said. Buses are at the mercy of how well the roads are plowed. About 17 buses were stuck and 21 were in accidents as of 1:30 p.m., he said.

8. And in DC, the Department of Public Works, which sends out plenty of mail to DC households over the course of the year, ought to develop a brochure on the responsibilities of property owners and renters for snow removal, and send that out to households and other property owners in advance of the winter season.

As an example, check out this one page pdf from Douglas County, Colorado

9. Although responsibilities for snow removal for the DC Government ought not to stop at the roads. Many sidewalks along school and park properties tend not to be shoveled. 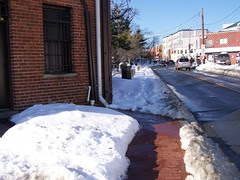 Such as the corner park at Blair Road and 4th Street NW.

10. And we need to think about drainage issues (rain and snow related) as they relate to comfortable walking environments. Note the gutter downspout in this photograph. The water comes out of this spout and sprays out onto the sidewalk, creating the potential for dangerous, slippery conditions--such as this morning--when the water freezes and ices up the sidewalk.

I have been thinking about this for a bit, since seeing this article, "Sloppy Bloor St. corners tough on pedestrians," in the Toronto Star, and this intersection in Bethesda yesterday... 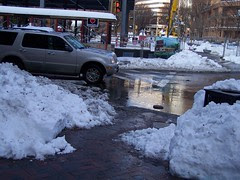 These issues will be covered in the bicycle and pedestrian plan that I am working on at present, for a county in the Baltimore region.