A "maintenance of way" agenda for the walking and transit city 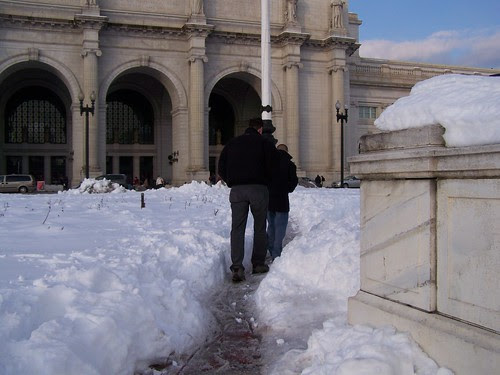 As of Saturday February 13th, Union Station has not shoveled snow on Columbus Plaza, through which people walk to the U.S. Capitol Complex from Union Station. While I didn't take photos, Baltimore City removes snow from the sidewalks on the routes to Penn Station, for at least a block, including the sidewalk of the bridges that abut the station. In Towson, the seat of the county government for Baltimore County, in the government complex (I don't know if this was done elsewhere in the county), on Friday the DPW was removing snow from parking lanes with front loaders and dump trucks.

It will take me awhile before I finally get to my Transportation Wish List for 2010, but since I am working on creating a pedestrian and bicycle plan for Baltimore County, Maryland, and because the planning process is now, during winter, it means I have been thinking quite a bit about snow removal, standing water, etc., on sidewalks, streets, at intersections and bus stops.

And since 4 days/week (usually), I travel through Baltimore City and Baltimore County, as well as in DC (albeit I only see certain places in each of the jurisdictions, having less time to be able to roam and check out the areas I might not normally traverse), there is plenty to observe and lots to consider.

Councilmember Jim Graham has announced he is changing the topic of two previously scheduled hearings to focus on snow removal. According to an email:

The hearings will be held Friday, February 26, at 11:00 am in room 500 of the Wilson Building (The Ceremonial Council Chamber); and Wednesday, March 10, at 1:00 pm in Room 123. Persons that wish to testify or send testimony should contact the Committee Office at 724.8195 or email ahawkinsmason@dccouncil.us.

[Councilmember Graham] want[s] to hear your suggestions about street plowing, snow covered hydrants, downed trees and other matters of concern, [and] your input on a new law requiring residents to clear the portion of the sidewalk adjacent to their homes after a snow storm.

I think that a new law for people to shovel sidewalks isn't really the issue, even when you have people organizing events to shovel sidewalks and bus shelters in their neighborhoods (see "Tenleytowners digging each other out" and "Let's shovel bus stops Sunday" from Greater Greater Washington).

While I think that the self-help efforts initiated by people like Neal Flanagan and Dennis Jaffe are great, what is needed is city planning for robust mobility and maintenance of way even in times of bad snowstorms. 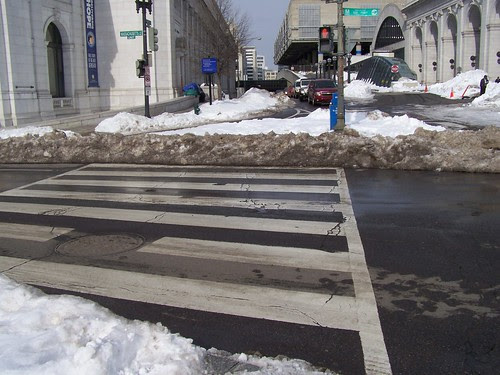 I wrote about this last year and this year already in terms of a walking and transit city needing to have plans to ensure mobility of people and transit (and bicyclists), when it snows, that is isn't enough to be satisfied with successful clearing of snow from streets, and not having plans and operational systems for removing snow from sidewalks, bicycle routes, and transit shelters, and for ensuring through specialized snow removal services, that bus service can still be provided on the routes that normally serve the city's residents, workers, and visitors.

That's where Councilmember Graham should focus his efforts.

I am not able to make either of those hearings, and I don't know if I will manage to submit testimony, but here goes.

It's not just a matter of passing a law about shoveling snow. Frankly, the various DC government agencies are some of the worst offenders as it relates to the snow removal from sidewalks abutting their properties.

Instead, the city has an opportunity with Councilmember Graham's hearings to lay out a truly different way of thinking as it relates to snow clearing or what railroads call "maintenance of way" in a city where walking and transit use dominates, and bicycle use is increasing significantly. 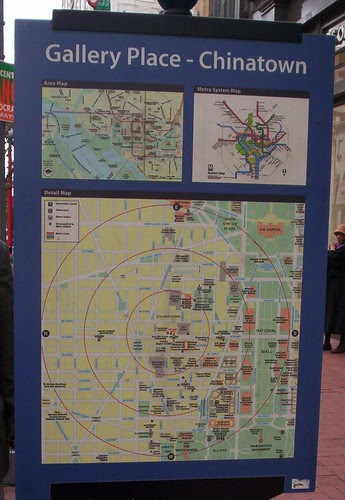 Each band on the map represents 1/4 mile, and 5 minutes walking distance.

Proposed agenda for snow removal policies that support walking, transit, and bicycling, in a city where upwards of 40% of households do not have cars, and where as much as 51% of trips to work are captured by walking, bicycling, and transit:

1. The city needs to develop a plan for "maintenance of way" so that citizens can get to schools, libraries, transit stops, transit stations, and local commercial districts, regardless of snow conditions. This is especially necessary for the one mile radius areas around subway and train stations.

Then the city could truly call itself a walking city. 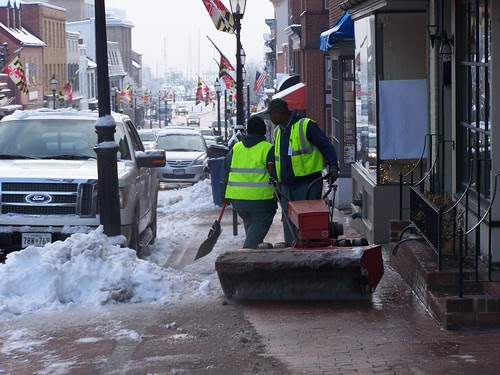 3. And the city needs to adopt specific policies and practices with regard to snow removal from bus stops as well as from bicycle trails that are also used for transportational purposes. 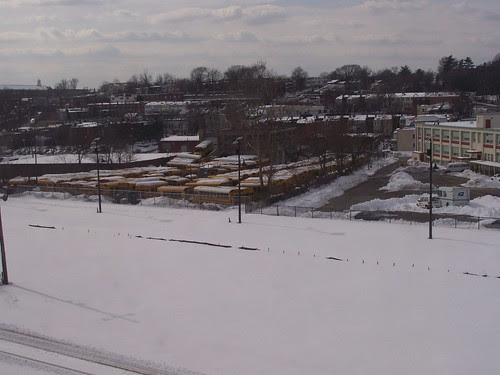 The Metropolitan Branch Trail, an off-road multiuse trail for bicyclists and pedestrians, between Rhode Island Avenue and T Street NE. At this time, there aren't plans for winter time snow removal. Many of the communities served by the Minuteman Trail in the Boston region provide snow removal services. See "On Minuteman Bikeway in winter, beginning to see their way clear" from the Boston Globe. 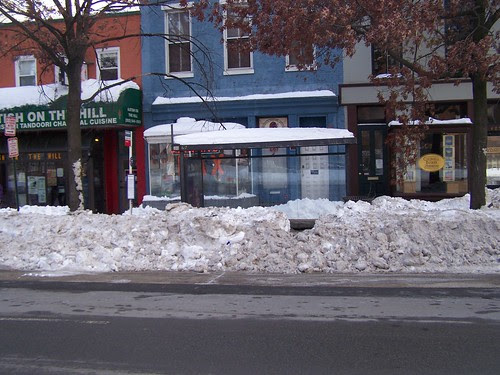 4. And the City needs to work out an agreement with the National Park Service for snow removal on NPS parcels (park space and other land reservations) that have sidewalks and are integrated into the city's urban fabric. It isn't just places like Seward Square on Pennsylvania Avenue SE in Capitol Hill that are an issue (see "Shoveling hall of shame: Dick Durbin and NPS" from GGW). It's also sidewalk along NPS land across the city, on streets like Galloway Street NE, or the block of South Dakota Avenue between Gallatin and Galloway Streets--all of these sidewalks lead into the Fort Totten Metro Station.

5. To maintain the economic vitality of the Downtown, which is the primary economic generator within the city in terms of tax revenue generation and maintains the city's place as a key center within the regional economy, the city needs to have a plan to deal with snow removal needs there, and in the other major employment centers in the city.

(I know this will get residents up in arms, but the reality is that the bulk of the city's tax revenues are generated by the commercial activity in the Central Business District and areas like Georgetown and Friendship Heights, not in the neighborhoods. The city needs to protect its cash cow, to maintain the prominence and reliability of the central business district as a key center of commerce within the region.)

6. The city needs to prioritize snow removal on bus routes, so that even if the aboveground transit stations are closed, WMATA could still run, safely, bus service on most of the routes. (Some routes, such as the G8, which goes up a big hill on Eastern Ave., likely would have issues.)

Even when it snows, in a transit city, people should not be denied transit.

-------------
Relating to points 5-7 especially, see Robert McCartney's column in today's Post, "Snow paralysis has cost area too much." The thrust of the column is that it costs more in lost economic activity than it would to pay to have the right equipment (such as diesel powered snow removal engines for WMATA) and personnel necessary to get streets, transit lines, (and sidewalks, which he doesn't mention directly) cleared quickly after bad snow storms.
-------------

8. Overall, this means that the city government needs to do a better job in terms of maintaining and provisioning equipment, and addressing the needs as they arise.

Clearly, the back-to-back "snow events" demonstrated that there weren't enough slack resources in the system to support continual snow removal over a one week period.

That doesn't mean that DDOT and DPW failed over the past week.

What it ought to mean is that the snow events of the last week give us the opportunity to assess and evaluate, and make recommendations for significant improvement.

From the standpoint of the idea of "continuous process improvement," this is something we should be doing all the time, anyway. 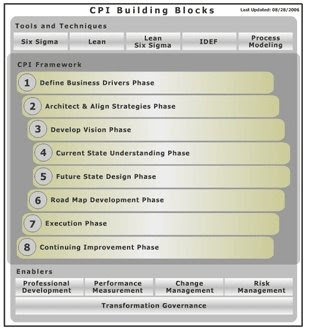 Diagram on the Continuous Improvement Process, from the Deputy Under Secretary of the Army Knowledge Center.

Nice information.. Thanks for the amazing post.
we takes care of all needs to maintain commercial properties in Winnipeg. We are committed in providing superior snow clearing and lawn care services to all our customers using high-quality equipment.
lawn care services winnipeg
Commercial snow removal winnipeg