In bicycle transportation planning, there are three categories of facilities:

- Class I - off street facilities where motorized transportation is not allowed and the facility is located outside of a roadway/right of way.
- Class II - facilities in the right of way, either separated or not separated from motorized traffic. We call these "bicycle lanes." A bicycle lane is marked by painted lines. A cycle track is physically separated from the roadway, but is still in the right of way of the roadside + roadway.
- Class III - markings -- signs and road markings -- denoting on-street mixing of motorized vehicles and bicycle traffic. Think "share the road."

Yesterday's Washington Post story about the coming of separated bicycle lanes within the right of way (Class II bicycle facility), "Pennsylvania Ave. to have dedicated bike lanes," used an image of a Class III bicycle facility to illustrate the article. Note that cover image on the Express yesterday, calling attention to the same article, did feature a Class II facility.

While it's true that "a picture tells 1,000 words" when you are telling the story, it's best to have the right picture! Below, the photo is of a "sharrow" marking, which is the on-road marking equivalent of a "share the road" sign. 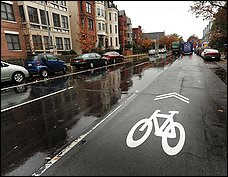 Under the plan, the 15th Street NW bike lane between U Street and Massachusetts Avenue would be extended to Pennsylvania Avenue. (Gerald Martineau/the Washington Post) 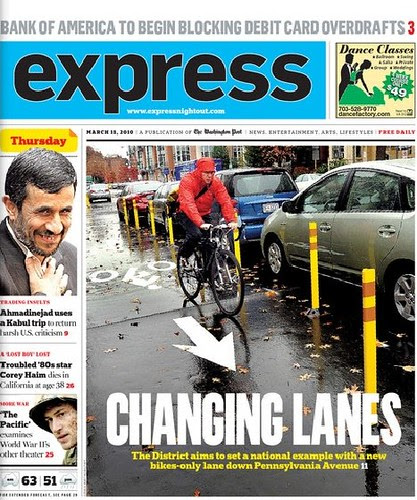