Safe bicycling and the right kind of infrastructure 8th Street and Tewksbury Place NW, Washington, DC.
There is a piece in a Reuters blog, "A unified theory of New York biking," that addresses the issue of conflicts between bicycles as traffic and motor vehicles, and calls for bicyclists to be treated like motor vehicles.
The fact is that's how the law treats bicyclists in most places (which is why adult bicyclists aren't allowed on sidewalks because they are vehicles and you can't drive a motor vehicle on a sidewalk either, except maybe in Georgia where the State Department of Transportation refers to sidewalks as potential "accident recovery zones" for cars careening off the roads).
The problem with this approach is threefold. First, it fails to recognize that aspects of the law that work well for motor vehicles don't work well for bicyclists or make a lot less sense for bicyclists.
This comes up in the context of Michael Dresser's Monday column in the Baltimore Sun, "Getting There: Bad-behaving bicyclists are problem, too," where he discusses the issue of bicyclists on the sidewalk in Baltimore.
There are at least two problems with the article: (1) Some things about laws for motor vehicles don't make sense for bicyclists, such as stopping at stop signs or traffic signals when there is no oncoming traffic or where there are significant gaps in the traffic flow. This is the basis of the "Idaho Stop," a law in the State of Idaho that allows bicyclists to treat such traffic devices as yield signs. See Idaho Stop FAQ from Bike Portland and this video. Another is allowing for contraflow bicycling--two way bicycling--on one way streets.
(2) while I agree that bicyclists should endeavor to stay off sidewalks, because bicyclists are faster than pedestrians, and this creates potentially unsafe situations (And hey even fast pedestrians complain about slow pedestrians, see "Londoners Take Aim at Sidewalk Scourge: Slow Walkers" from the Wall Street Journal), he fails to acknowledge that the number of people riding on the sidewalk is an indicator of how they perceive the level of safety for the alternative--riding on the streets. In short, the higher number of bicyclists on the sidewalks, the greater is the perception that riding on the street is unsafe.
So this leads into the second problem with the laws being written to treat bicycles as co-equal traffic--the fact is that street infrastructure is optimized for motor vehicles, not bicyclists, and by its very nature, road design focused on motor vehicles tends to fail to provide adequately for bicyclists.
So bicyclists are expected to behave as motor vehicles, when both the laws and the infrastructure privileges motor vehicle traffic at the expense of the bicyclist.
Note that in response to these issues, some communities are developing practices that optimize bicycling and bicycling infrastructure over motor vehicles. This comes out of a recognition that bicycling should be optimized and is a much more sustainable transportation mode that should be treated as superior to motor vehicles in terms of the impact on the street and the mobility network from the standpoint of optimal mobility and movement throughput. 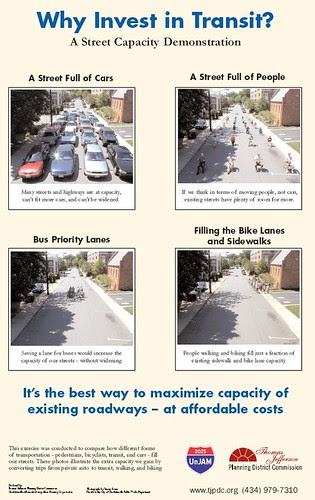 This exercise in Charlottesville demonstrates that walking, bicycling, and transit are superior movers of people through the transportation system, compared to the amount of space required to move the same number of people by automobile.
Third, I think we've proven very well in the U.S. that despite the virulent advocacy by people like John Forrester, vehicular cycling doesn't result in many people bicycling for transportational purposes.
See "Portland's Bicycling Brilliance" from The Tyee about Roger Geller's research on this point, that about 60% of the U.S. population is willing to bicycle for transportation, but doesn't, because they don't feel safe riding in the conditions that bicyclists are expected to ride in today, given the type of infrastructure that is provided. 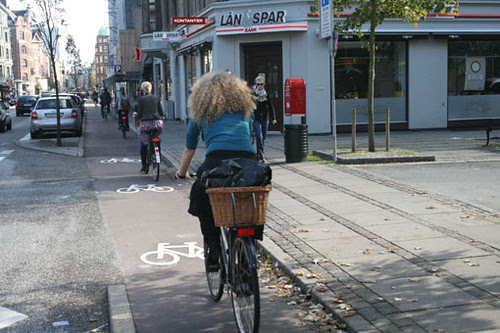 Cycletrack in Copenhagen. Photo from Streetsblog.
The success of bicycling as a mode of transportation in places like Copenhagen or other cities in Europe is a direct result of the creation of dedicated separated infrastructure for bicyclists. This allows bicyclists of all ages and genders to feel comfortable and safe while riding. That's why (besides the right topography) that in Copenhagen, 40% of all household trips are conducted on a bicycle. This is what Professors John Pucher of Rutgers University and Ralph Buehler (now at Virgina Tech in Alexandria, VA) write about in articles such as "Making Cycling Irresistible: Lessons from the Netherlands, Denmark, and Germany."
-------
I guess one of the things that bugs me about many of the people writing about these topics, from the Reuters blog, to the editor of themail/DCWatch, is that they fail to recognize and acknowledge how the current regime of transportation/traffic planning is focused on speeding vehicular traffic, and how that is in fact deleterious to community, quality of life, placemaking and other pro-community goals and objectives.
Since I've written about that general issue quite a bit over the past few days, I don't need to go into more detail about the point.
But the efforts of people like John Pucher, Jan Gehl (in Denmark and around the world), David Engwicht (in Australia and around the world), Hans Monderman (now deceased, the creator of the "shared space" concept), and politicians like Mayor Joseph Riley of Charleston, South Carolina, or Enrique Penalosa, formerly the Mayor of Bogota, Colombia, and many many many others are all focused on that fact.
As Simon Kuper said in a recent column in the Financial Times that I quoted from yesterday (paraphrased and explained), "which city do you want to live in, Zurich, with its robust transit system and limited automobile congestion, or Caracas, which is choked to the death by automobile traffic?"
But transitions to new paradigms are very very hard. And people working to make those transitions happen often get chewed up in the bargain. (E.g., Enrique Penalosa hasn't been able to get reelected as Mayor, or as a national Senator, despite a number of tries.)
But when so much of the economy (oil production, automobile manufacturing, automobile service and sales, gasoline sales, sprawl based real estate development, road construction, etc.) is dependent on automobility, it's easy to understand the drumbeat of opposition to sustainable transportation, and why when automobilists are willing to condescend to bicycling and transit it's on their terms--act as motor vehicles and be happy with the access or bus rapid transit which uses roads rather than rail transit.

This is a great post this post shares information about safe bicycling.
It is urgent to improve cycling wellbeing in the United States. The United States has a lot higher casualty and actual damage rates per kilometer cycled than similar high-salary nations.
"buy medicine online"