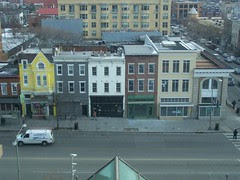 New construction using historic preservation design principles at 14th Street NW
Originally uploaded by rllayman
14th and U Street NW is an infamous corner from the standpoint of urban revitalization. The Reeves Center across the street is a big box building that I have argued for years didn't improve the area--although the business death that occurred during the construction of the green line subway didn't help.

There are many lots within a block or two of this intersection that are "blighted" and if the Reeves Center were so great, that situation wouldn't have maintained itself for decades.

The building shown in the rightmost position used to be a bbq place, but then was rented to some wack job from out of town who refused to do anything with the property for more than one decade.

The beige building to the immediate left of the corner building was a vacant lot for decades, and the new building was constructed a couple years ago.

Similarly, the brown bricked building next to the beige building is also new construction.

Unlike say the Kinkos-Radio Shack across from Eastern Market with a fake second floor, these buildings are three story buildings with the upper floors being usable.

It's a step forward, but it's taken decades to get to this point. 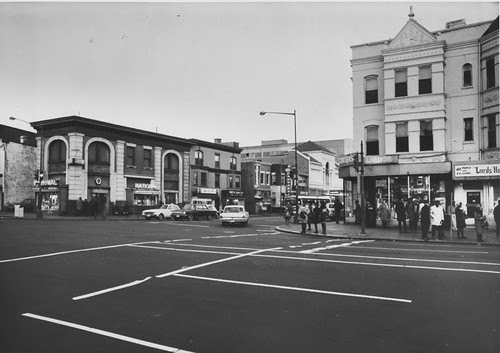 Before the riots, at the same intersection. Source unknown. Note that immediately next to the aforementioned building was a vacant lot. Suburban outmigration and disinvestment in otherwise key locations has been a multidecade process, as this image indicates.

I have blogged about this site before, but it's such an important illustration of the difficulty of getting the right result design-wise and urban revitalization-wise because for the most part you are dependent on enlightened property owners, and sadly such are few and far between when it comes to commercial property owners in traditional commercial districts in urban centers that have experienced decline.

When it finally happens right, it's truly cause for celebration.

I mean, think of that #$%^&*()_ one story CVS drug store at New Hampshire and Georgia Avenues. I am told that long ago, there was also a soda fountain drug store on the site, and the building was multi-story, just like how the CVS should have been. 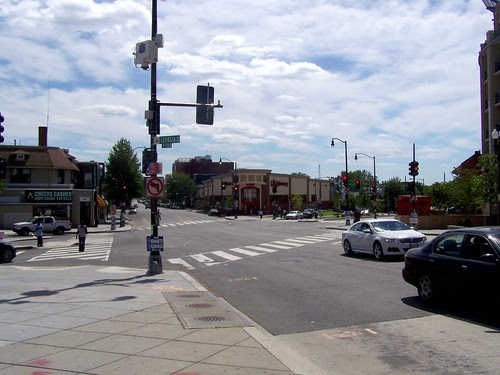 The problem with CVS and similar companies is that they don't own their real estate and they don't give a damn about community improvement. There are real estate investment trusts that focus on owning the buildings rented by pharmacies, and they want their property portfolio to be simple and easy to administer. Having anything other than a drug store in the building complicates things. Hence, good for the drug store company, good for the property owner, bad for the community.