Like many transit systems in North America, which were built to support land development, London's Metropolitan Railway system actively promoted land development in the Northwest suburbs. For about ten years, from 1915 to 1924, they produced annuals called "Metro-land," which were comprehensive guidebooks to living in the suburbs, with the proviso that the main breadwinner would continue to work in the city through commuting on the transit system.
The London Underground and how it was marketed is one of the world's best examples of the use of graphic design and integrated marketing techniques to build ridership. This was a necessity because the system expanded and lack of ridership pushed the company to the point of insolvency. Frank Pick, a young operations analyst with railroad experience and a great number of advanced ideas concerning design and the role of the Underground transit system in redefining London, with great insights developed this program through the process of trial and error. Of course, the development and design of railroads in 19th century England had a similar focus, and obviously this influenced Pick, who had previously worked at the North Eastern Railway and had followed his boss to the London Underground in 1905.
While I am late to the party in discussing WMATA's proposal to cut late night hours on Fridays and Saturdays, this has been discussed elsewhere, including entries in GGW ("Beware engineer-think on late night hours," "Metro's future rides on Saturday night," and "What does Metro's late night service look like?") and an article and editorial in the Post, "Metro after Midnight: 'No one wants to go out in Georgetown'." and "Keep Metrorail running after midnight: The justifications: safety and business".) 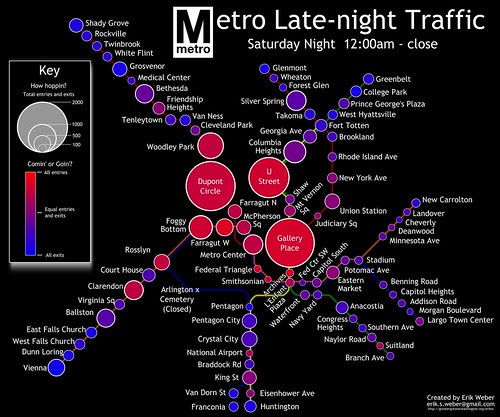 What unites the entries is the recognition that WMATA is more than a commuter-oriented railroad, but the enabler of sustainable transportation, urbanity, and urban life, and that the less the trains run, the less urban we are as a region.
Reading the book London Transport Posters: A Century of Art and Design is important, because it's more than just a listing of particularly cool posters. The book is also a good discussion of the role of design in developing, communicating about, and building a business, as well as in how the transit system in London saw its role and mission in a much broader sense than does WMATA.
Some quotes from the book:
"The new idea of London with the Underground at its core." (p. 24)
"Sell the Underground through its destinations, aiming to inspire customers to make journeys that had not yet crossed their minds." (p. 29)
"Early Underground posters featured a full range of urban attractions, as well as inviting passengers to escape to green spaces on the outskirts of the city." (p. 29-30)
"London as a living city, constantly refreshed and changing." (p. 30)
"Conception of a metropolis as a centre of life, of civilization, more intense, more eager, more vitalizing than has ever so far obtained." (p. 37)
"Public transport was not just a way of getting about in the city, but could become conceptually and physically 'the framework upon which a town is built,' a key element in civic progress." (p. 48)
Of course, the failure to achieve something like this in the Washington metropolitan area especially with regard to broad transportation planning is something that has troubled me for years, and has culminated in a presentation I have about the difference between metropolitan transportation planning--where the region first sets its priorities for service frequency and the breadth and depth of the transit network and then contracts with transit providers to deliver the service--and by having the transit operator serve by default as the primary transportation planner, focused on satisficing service because of funding shortfalls, which will always come at the expense of frequency and network breadth and depth.
See:
- Metropolitan Mass Transit Planning presentation
There are many books and publications about the London Transport system. Of course, like most transit systems, originally it was a for profit service without subsidy, so the more riders, the more money the system made. 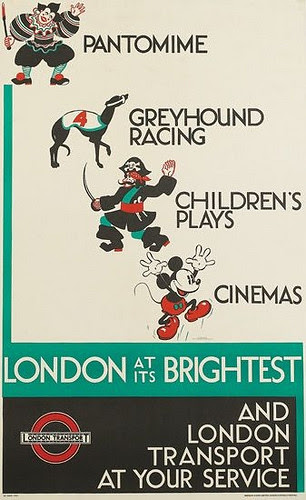 For transit users, you can't get to and from places when the system isn't convenient or isn't running.
And there is no question that the WMATA system suffers from multiple roles--commuter railroad for far-out suburban commuters vs. "the framework upon which the city is built," the cost of maintenance and upgrades, and the uncertainty from year to year concerning its budget, not to mention the problems with overall leadership and guidance and the local governance system.
Still, the subway system fails because it was created by people who had worked for the Army Corps of Engineers and because they saw their role primarily as creating a transit system to bring suburbanites to and from their jobs in the city.
Until that culture is changed, DC will suffer from the failure of the transit system to truly serve as the foundation and framework on which sustainable mobility is built. 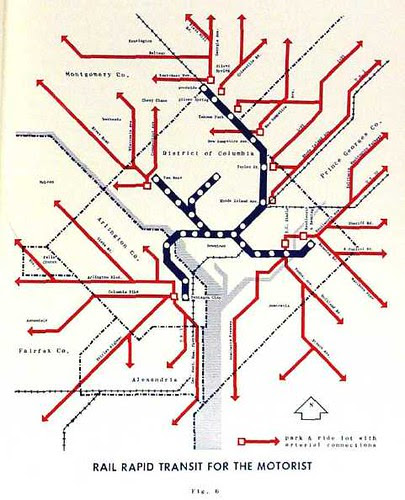 Early design for the Metro system. Caption: Stolzenbach's attack on the freeways led to a political storm and, ultimately, his departure. In 1965, the NCTA proposed a much more modest system and promised that it would work with automobiles, not against them. This plan got Congressional approval., U.S. National Capital Transportation Agency, Rail Rapid Transit for the Nation's Capital, 1965 DCPL. (from the online exhibit Building the Washington Metro, associated with the book The Great Society Subway: A History of the Washington Metro by Zachary Schrag.

Note the legend of this proposed subway routing system. I think instead of "motorist" they meant "suburban commuter."