Today's Post has a column on promoting racism through how the Civil War is commemorated through Government proclamation in Virginia. See "Revisionists having a ball with Civil War anniversary" by Courtland Milloy.
Ironically, this weekend we spent a couple days vacationing in Richmond--partly because an exhibit on Picasso opened Saturday at the Virginia Museum of Fine Arts--and because I like commercial districts there like Carytown and the Fan District (the Black Swan Used Bookstore in the Fan District is particularly great), it's compact and easy to get around, and there is a lot to see.
Of course, the building stock is great, with a greater variety of types of buildings (compared to DC) from the period of say 1870-1930, which is the period of U.S. urban architecture development that I like particularly. For the first time, we went to the Byrd Theatre, a historic theater that shows $2 movies. Maybe "Burlesque" wasn't that great of a movie, but with organ music playing beforehand, and on that super large screen, it was still a great experience... 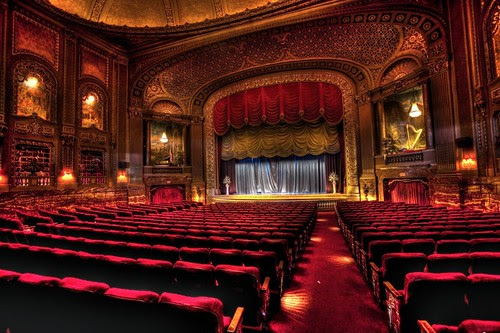 HDR photo of the interior of the Bryd Theatre by DMPhoto. (Note that the theater is more threadbare than indicated by the enhanced photo.)
When we go to places I also like to go to the local history museum(s) to see how they interpret local history and how they deal with difficult issues and whether or not difficult issues are addressed.
This comes up for me with regard to the interpretation and presentation of the local story of history in Washington, DC and the region, and a failure, often, to be direct. From time to time when I am given the opportunity to review projects that may be in development, I tend to comment on this issue, and what I call "community building" and making people feel good, versus presenting history and its challenges as an opportunity to learn.
WRT the Civil War, as Courtland Milloy discussed, this is a difficult issue. For example, I have written about how Petersburg, Virginia's local history sites don't do a very good job of interpreting the Civil War in terms of a broader perspective--even in the late 1960s sociologists like Barrington Moore discussed the Civil War in terms of refashioning the American Economy on industry.
Richmond's Valentine Richmond History Center is the local history museum, and one of the permanent exhibitions, "SETTLEMENT TO STREETCAR SUBURBS: RICHMOND AND ITS PEOPLE," logically, is an overview of Richmond's history from the standpoint of broad narrative and the major themes up til about 1900. 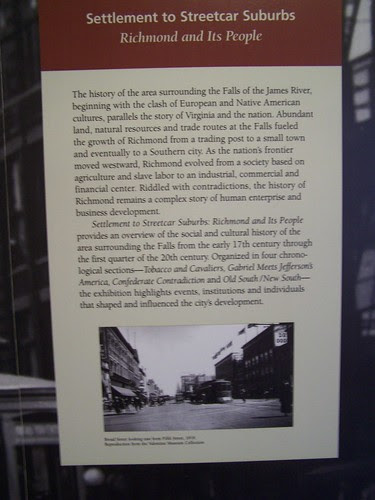 The exhibit shocked me in how it treated the Civil War because it was direct and not about myth, and involved more current interpretations. The exhibit discusses how Richmond's business elite, because the city was the South's most industrialized city, did not favor secession; it covers the creation of the "Lost Cause" myth--which is still the narrative of today's apologists; as well as Segregationist policies and Old South/New South interpretations.

Given how the Smithsonian Institutions are "forced" to interpret history in terms of acceptable beliefs about American Myth, Memory, and National Identity, and how this trickles down in terms of how the local story is told, it was interesting to see. The museum is smaller than say the Pittsburgh History Center, but they cover a lot of ground with the resources they have.

At the VMFA, there is also a great exhibit on the "Special Artists" of the Civil War (Civil War Drawings from the Becker Collection), the artists who drew battle and other scenes from the Civil War, which were published in nationally distributed magazines such as Frank Leslie's Illustrated Weekly, Harper's Weekly, and the Illustrated London News. This exhibit was drawn from the archives of the Leslie Newspaper, which were saved by the paper's art editor, Joseph Baker. 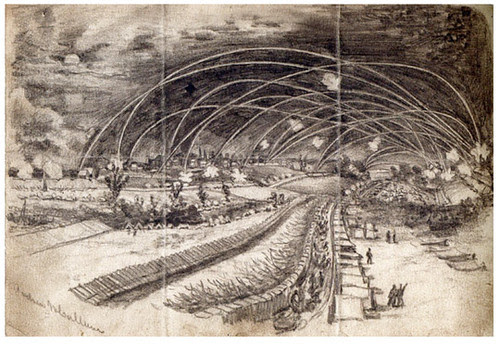 The interpretive panels discussed how the drawings were subsequently modified and embellished before printing, in ways to strengthen the message and communicate various positions. It made me consider the published drawings in new ways, that the idea that you can't always believe what you "read" in the newspaper is hardly a new phenomenon.

The fact is that these kinds of exhibits need to be supported by journalists and public intellectuals. When discourse is constrained, key questions get ignored. And frankly, the Washington Post has contributed to this with regard to the Smithsonian Institution, at least in terms of some of the writings of Marc Fisher with regard to the National Museum of the American Indian (see the journal article "The National Museum of the American Indian as cultural sovereignty" from American Quarterly) and the National Museum of American History--in my opinion anyway, he has supported very traditional forms of interpretation, rather than more expansive perspectives. (Note that the writings of Blake Gopnik, with regard to the Smithsonian American Art Museum's censorship of a particular work in the Hide/Seek exhibit have been much different from this standpoint, compared to Fisher.)

But when journalists focus on the Sons of the Confederacy, and not some of the more serious scholarship, interpretation, and presentation, it becomes harder for curators to present more modern narratives that challenge the status quo, not easier... and becomes another reason to question the accuracy of dominant media institutions.
-----
Note: I have written before about the public art program of Tri-Met, the transit authority in Portland, Oregon, and how the public art/public history projects incorporated into the Yellow Line light rail project and art at particularly stations also challenged convention in gutsy ways that is typically quite unusual for government entities.