What you don't know can make for flawed analysis

The article "Strict Constructionists: Is the Heritage Foundation a threat to historic preservation?" in the Washington City Paper Housing Complex blog, criticizes the Capitol Hill Restoration Society for suing the city over an issue that the writer sees as decided, because the addition of a third floor to a building on the 200 block of Pennsylvania Avenue SE, in the Capitol Hill Historic District has already been constructed and is in use.
This issue has been going on for awhile, see the 2008 article, "Society To Defend Historic District in Mayor’s Agent Case: Heritage Foundation Proposal at Stake" from the CHRS newsletter.
From the City Paper article:
CHRS’ involvement started as a desperate attempt to prevent renovations that could spawn imitators across the city. But after three levels of appeal, it’s turned into a battle for something even more serious to local preservationists: The authority of the Historic Preservation Review Board itself. ...
Heritage wanted more space on top for a meeting room and executive offices, and had their architect work with the city’s Historic Preservation Office to draw up plans that would pass muster with the review board. Along the way, the Advisory Neighborhood Commission, Capitol Hill business groups—even the federal Commission on Fine Arts—all signed off the plans.

Still, the Historic Preservation Office staff wanted the addition to be set back 25 feet to minimize its visibility. In September 2008, with CHRS pushing for no addition at all, the review board approved the staff’s recommendation as a “compromise.” From Heritage’s perspective, that would have made the renovations—which they had already started, after obtaining separate approval for the bottom floors—not even worth the cost.

Heritage immediately appealed to the next level: the mayor, who has the authority to approve building permits in historic districts. For years, an administrative law judge had served as the Mayor’s Agent, before Adrian Fenty installed his Office of Planning director, Harriet Tregoning, in the role.

In a December 2008 hearing, arguments came down to a fundamental question: Does the Historic Preservation Act allow alterations that contribute to the overall architectural quality of the building? Or must the original intent of the builder, and the historic character of the block, be privileged above all else?

Then-HPRB chairman Tersh Boasberg set the stakes high: “Because of precedent, if we were to add a third story or a fourth story to all of the buildings who came before us in this similar circumstances, then the character of Capitol Hill would be terribly changed.” ...

In her decision nine months later, Tregoning agreed, finding that Heritage shouldn’t be punished because of the potential impact on later applications. The overall design was of high quality, and a roofline may not deserve protection.

But the most dangerous element of her analysis, from CHRS and Boasberg’s perspective, was the argument that the Mayor’s Agent owes no special deference to the HPRB.

Being a preservationist myself, I am often a serious critic of the way we handle various preservation matters in the city, not to mention that we are inadequately explaining why preservation matters generally, how it has been essential to the stabilization and improvement of once declining and shrinking neighborhoods setting the stage for today's successful city, and that we could do a better job of reaching out to and including new audiences in our organizations and activities.
And I have some problems with CHRS on certain issues, even though my experience is that because their defined interest area outspans the specific boundaries of the designated Capitol Hill Historic District, that they tend to be more knowledgeable about the tradeoffs and concerns that arise in places that aren't designated as historic, but have equally attractive building stock deserving of protection.
In short, while not perfect, CHRS tends to have a greater breadth of perspective concerning historic preservation matters in the city, especially when compared to most neighborhood-based preservation groups. (Note that I have worked with CHRS on matters in the past, have been an off and on member, I frequently attend the May House Tour, and they provided a $5,000 grant to an H Street historic preservation study that I managed in 2001-2002.) 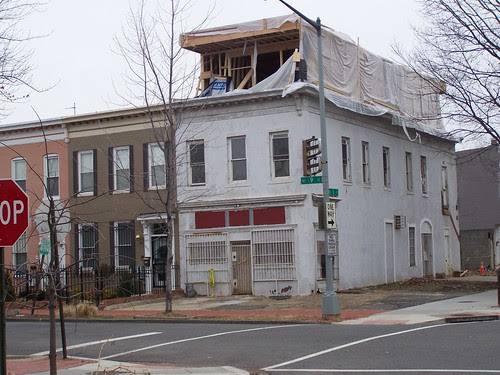 First photo: apartment building on the west side of the 800 block of 8th Street NE in the H Street neighborhood. Second photo: rowhouse, formerly used as a church, at the NE corner of 9th and I Streets NE.
These photos show why additions to buildings matter and they also show why historic designation is important, because otherwise most neighborhoods have no opportunity for design review.
Crappy infill and additions is typical in non-designated neighborhoods, and demonstrates why concerns about changing the height lines of extant historic buildings and especially significant blocks are a serious matter within the city's preservation policies, and ought not to be made fun of but taken very seriously.
CHRS raises at least three very important issues which aren't adequately addressed by the article, and these issues are significant in terms of how the rule of law is supposed to work in the United States--an issue by the way that goes far beyond this one (cf. Wisconsin, New Jersey, Ohio, Indiana and other states proposing to remove by legislation and/or fiat, job protections for state and local government workers)--not to mention preservation law, and how these kinds of matters are supposed to be addressed:

Recognizing of course that the appeal process allows for and does make decisions on broader criteria than that employed by Historic Preservation Review Board and the Historic Preservation Office which are bound only by the historic preservation act as amended, federal historic preservation laws relevant to the board's purview, and the regulations carrying out these laws.
Still, a great deal of deference is afforded to the laws that are in place. (It's why for the most part when it's been suggested to me on matters involving Walmart that 'you should sue the city!' I am very leery.)
Note also that all jurisdictions have a similar process for appeals of land use regulation matters-decisions, including historic preservation decisions

And note also that I have a great deal of respect for Harriet Tregoning, the director of the Office of Planning, I love talking planning theory with her, and I asked her for and received a reference and advice in the process of my applying for a temporary (grant funded, one year maximum term) position at the Baltimore County Office of Planning. (She used to be Secretary of Planning for the State of Maryland, and her word carries a lot of weight in planning circles in Maryland.)
The point in this matter regarding the impartiality of decision making on the part the Mayor's Agent is particularly important, recognizing that positions serving at the pleasure of the Executive are not fully independent and therefore subject to suasion and/or directives that may not necessarily conform with the law. (For another similar instance of undue executive influence over preservation matters, see this article "Apple Store Design Hits a Glass Wall Again" from the Washington Post concerning the design of the Apple Store in Georgetown.)
This is why it is better for the Mayor's Agent to be an administrative law judge such as when the position was held by Judge Ro Quander as this position is not a political appointment.
At the end of the day, the director of the Office of Planning has to take orders from the Mayor or his/her designates. That's the nature of government. And you don't really understand that until you work in it, even if for a brief period.

3. The issue of roof line and building height and additions to buildings in historic districts is a key matter that is deserving of broader debate, discussion, and consideration, rather than through an ad hoc building-by-building consideration through cases before the Mayor's Agent, especially in terms of points one and two.
IT'S easy to criticize preservationists, because frankly, preservationists say the word no more than they say the word yes.
But people who stand on principle, in the heat of the moment, rarely are positively acknowledged for the difficult stands that they take.
Therefore, I think this article (and a similar blog entry, "Getting personal with preservation, and what I hope will change within the field.") reflect a narrow set of experiences and time frame that make it difficult for them to consider the matter fully and expansively and with the level of import that the matter truly deserves.