The weird findings on transit from the recent Brookings Institution

Last week, the Brookings Institution released a study on transit, Missed Opportunity: Transit and Jobs in Metropolitan America, that seemed really weird, because the rankings seemed wildly disconnected from reality on the ground, based on use. It's like that study of sustainability that always ranks the Baltimore region higher than the DC region, even though DC's transit is 9 times superior (ranked by the number of people using rail transit in the DC region vs. the Baltimore region, according to statistics compiled by the American Public Transportation Association).

How could Honolulu be ranked #1, when the bus system carries about 223,000 riders/day? 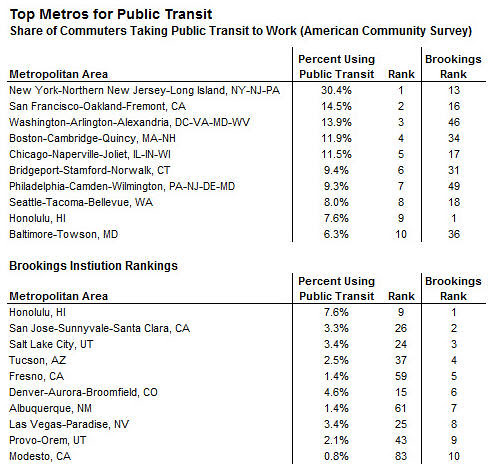 I think it was because the study was more about ranking a community-metropolitan area's relative compactness--it compared metropolitan areas in determining how effectively transit systems connect people with jobs, by measuring the proximity of transit stops to working age adults. Also see "Study finds pluses in D.C. public transit" from the Washington Post.

But as Nate Silver says in "On the Economics of Mass Transit and the Value of Common Sense" in the New York Times, the study doesn't get at the fact that riding transit vs. choosing other forms of mobility such as driving depends on the characteristics of the trip, choosing presumably the most efficient mode depending on cost, time, convenience.

As a result, the study's data seems wildly out of sorts compared to reality.

As a result, the study ends up not being very helpful in terms of supporting the case for transit, when the places that do better in terms of ridership and economic benefits and therefore are national models for demonstrating how to integrate multiple transit modes into their communities in ways that support compact development, infill development, and urban revitalization--such as Portland Oregon--end up being graded less well compared to Modesto, California (see "'#12 Transit'? TriMet, Portland area ranking in Brookings study not on board with bus ads" from the Portland Oregonian).

For another perspective, see "10 Best Cities for Public Transportation" from US News & World Report. In that study, the DC region is 11th and Portland fifth (AND DENVER is #1!?????), although the mode split for sustainable mobility--the percentage of the local population using walking, biking, or transit to get to work--between the two cities is more than 100% higher in DC's favor compared to Portland and not quite 400% higher for DC compared to Denver (although this data is only for work trips).

A good post with useful data comparison tables is Transport Politic's entry from last fall, "Transit Mode Share Trends Looking Steady; Rail Appears to Encourage Non-Automobile Commutes." I think the sub-head of that post, "rail appears to encourage non-automobile commutes," is a very important statement that makes the point that for "choice riders," if you want to encourage transit vs. driving, rail-based transit options are superior.

Note that I am not trying to make the case that DC transit is better than Portland's, but that how a metropolitan area is organized, the relative concentration of major employment centers, the monocentricity vs. polycentricity of the transit system and the region, and other factors make the difference in terms of usage--whether or not transit is an efficient way to get around compared to other modes.

Basically it comes down to where you live vs. where you work, go to school, shop, and play and whether or not transit (or biking or walking) is an efficient way to get there.