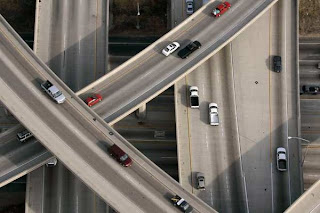 Smart Growth America came out with a report, Repair Priorities: Transportation spending strategies to save taxpayer dollars and improve roads, which makes the point that the cost of maintaining roads is rising faster than the cost of building them.

Plus, there is an article just about to come out in the American Economic Review, "The Fundamental Law of Road Congestion: Evidence from US cities," which is abstracted thusly:

We investigate the relationship between interstate highways and highway vehicle kilometers traveled (VKT) in US cities. We find that VKT increases proportionately to highways and identify three important sources for this extra VKT: an increase in driving by current residents; an increase in transportation intensive production activity; and an inflow of new residents. The provision of public transportation has no impact on VKT. We also estimate the aggregate city level demand for VKT and find it to be very elastic. We conclude that an increased provision of roads or public transit is unlikely to relieve congestion.

I disagree a little bit with this conclusion, because there is no question that in places like DC and Arlington County Virginia, public transit at least when paired with compact development, absolutely reduces traffic congestion. At all times of day, even during rush periods, if only comparatively. But when you study the top 100 cities, and only a few of them have extensive transit systems, and only a few of them have areas of the region that not only have transit systems but also compact development patterns, it becomes impossible to find a direct connection between transit (and walkability and bikeability) and congestion reduction.

Well, what is prioritized funding-wise is what gets built, and as various books such as Asphalt Nation or Getting There: The Epic Struggle Between Road and Rail in the American Century have pointed out, our transportation development and maintenance system is mostly focused on roads and automobility, even though this is an expensive paradigm that doesn't make sense in a lot of places.

FWIW, A. Barton Hinkle, the editorial page editor of the Richmond Times-Dispatch, has been making this point for a long time, that for every mile of new road that is constructed, future budgetary needs for maintenance ought to increase accordingly.

Thanks for every other informative site. The place else may just I get that kind of information written in such an ideal means? I have a venture that I’m just now operating on, and I have been on the look out for such information. Read on Roads paving