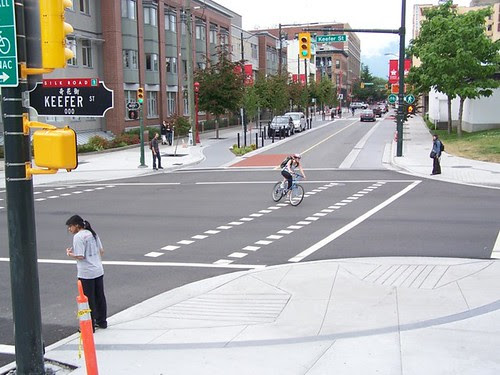 Image by John Luton: Carrall Street raised bike lane segment, Vancouver. Caption: New raised and separated bike lane segments on Carral St. in downtown Vancouver will help connect trail facilities that encircle the downtown core.
In the Washington City Paper last week, the Housing Complex column "Sidewalk of Shame," made the basic point that I have been making for awhile, that improvements to the public realm ought to be coordinated and "bigger" rather than a bunch of one-offs.
The image from Vancouver shows an enhanced public realm focused on providing excellent public spaces--note the width of sidewalks, separated sidewalk for pedestrians, and enhanced cycletrack treatments for bicyclists--makes me believe even more that we haven't been thinking big enough at all with regard to cycletracks on L and M Streets in Downtown DC, the same cycletracks that have been put on hold, according to the blogosphere ("DDOT may cancel L and M Street cycle tracks" from GGW, based on confirmation hearings before City Council).

The original idea for the cycletracks were to provide east-west connections in the central business district, but also to make a connection to the Metropolitan Branch Trail in Northeast DC. The MBT is DC's first major urban bicycle trail and has been 20+ years in the making. 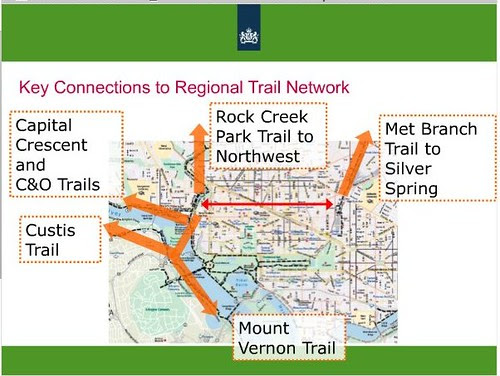 But by extending this set of cycletracks up M Street to and through Georgetown up to and across the Key Bridge, these cycletracks become foundational bikeways connecting six metropolitan trails: Metropolitan Branch Trail; Rock Creek Trail; C&O Canal Trail; Capital Crescent Trail (which starts in Maryland); Custis Trail in Virginia (which connects to the Washington & Old Dominion Trail); Mount Vernon Trail (Virginia).

This is something that we figured out at the Dutch ThinkBike workshop last November, and we came up with this idea, but didn't have time to make up some great graphics for the "Cross Town Connector" bikeway comparable to some of the proposed graphic design treatments of the Better Bikeways project (articles about the project from Good Magazine). 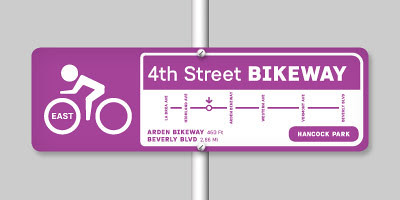 Imagine such a cycletrack going up through Georgetown, and what that would communicate about bicycling, and how much safer and easier bicycling would become, and how this would increase the willingness of many more people to bike.
Frankly, in terms of visibility, cycletracks-bikeways on M Street in Georgetown would have far more use and impact than the cycletracks on Pennsylvania Avenue Downtown, which because that area is mostly federal office buildings and the area is somewhat disconnected from where people are--either Downtown or on the National Mall or on Constitution Avenue but not Pennsylvania Avenue, at least not there--the lanes are mostly unused.
M Street Georgetown, photo by BeyondDC 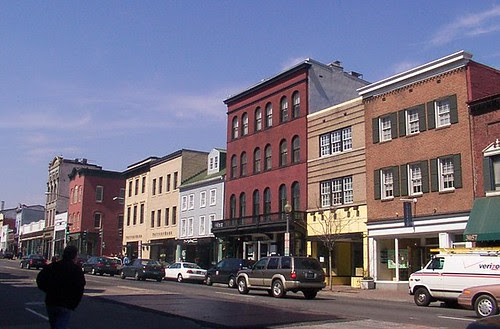 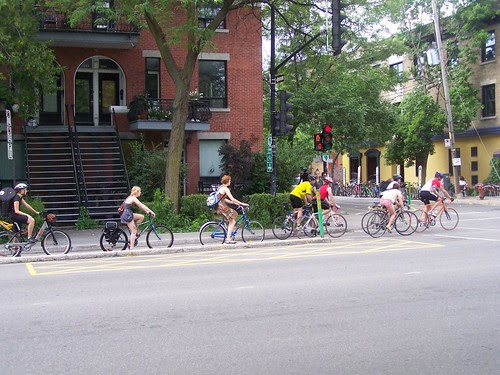