Supporting car sharing vs. privileging car owners and the use of the public space 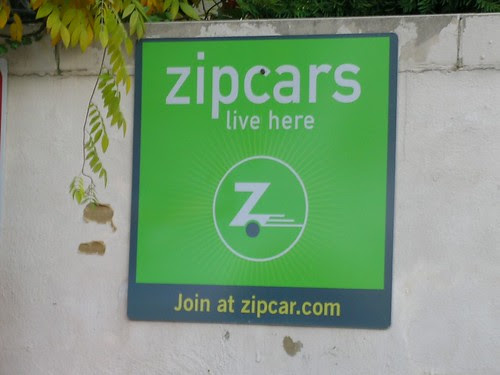 Flickr photo by akseabird.
DC recently decided to put up the street spaces located in commercial districts that it has dedicated to car sharing up for bid, and Zipcar, the for profit company with the largest local presence and active user base (i.e., critical mass), was outbid for most of the spaces by well-funded competitors who could also use non-market-based criteria (i.e., over-bidding beyond the economic value to crowd out their competitors). 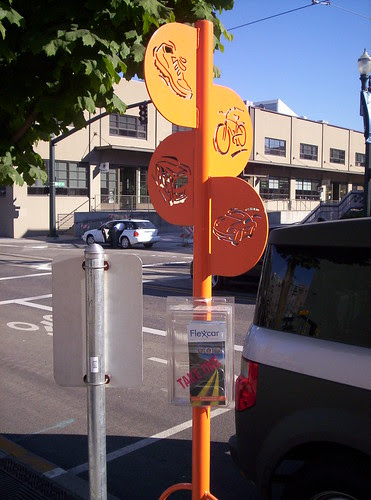 Distinctive orange pole used to demark car sharing spots.
I wrote about this in "Another example of DC's failures in transportation planning: carsharing."
What that means for Zipcar users is that most of the public spaces used for Zipcars are no longer available--not only to Zipcar but to the users--and the users are people like me who are citizens of the District of Columbia.
It's not like Zipcar is significantly less convenient because of the change--more Zipcar spaces are on private property anyway.
But it does make a huge difference in terms of the cost/hour to use the car.
I could get cars from the 4th and Blair Street NW location for $7.75/hour. Now the base price seems to be about $11.25/hour for use of cars parked on private property--a difference of $3.50/hour.
If we use Zipcar about 75 hours/year that's an additional $262.50/year.
Granted some of the increase is likely due to increased costs, especially for gasoline, but still, that's a lot of money.
When the car sharing concept was first introduced, I too had some reservations about "free" (they ended up paying) use of dedicated public parking spaces for a "for profit" company.
But later I reconsidered ("High Cost of Free* Parking Revisited and Car Sharing in DC"), realizing that the issue wasn't about the for profit company benefiting as much as it was the member-users benefiting, and the overall reduction of the number of registered vehicles in DC, thereby reducing the demand for parking and car trips more generally.
Because of DC's policy change, many households will end up paying hundreds of dollars more per year to use cars occasionally.
Meanwhile, for spaces worth as much or more than $2,000/year, owners of cars registered in DC now pay $35/year for a parking permit (it was $15 for years, it just went up on October 1st). And many blocks in the city don't even have residential parking permit requirements.
I ask again, as I did in 2005, should car owners be specially privileged over car users in the use of the public space for parking?
I say no.
Note that Toronto is about the only city in North America that charges more than a minimal amount for residential parking permits.
From the website:
Permit fees vary according to a priority system based on need as reflected below: