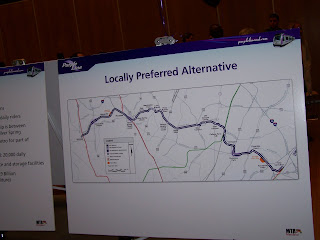 There is a letter to the editor in the Post today ("Why not use extend Metro’s Green Line to BWI?") by a PG County resident, saying that the county should be planning for extension of the WMATA green line heavy rail line to BWI Airport, and not the Purple Line.
This is another example of the difference between intra-community transit (county not city in this case) versus inter-community transit. See the past blog entry, "Making the case for intra-city (vs. inter-city) transit planning."
The Purple Line light rail system and 11 proposed stations(one is on the border of Montgomery County so I double count it) in Prince George's County gives Prince George's County the opportunity to reposition its land use, real estate development and transportation planning paradigm by re-centering it around transit access and connection, rather than the automobile as the primary transportation modality in the county.
A line to BWI extends the transit system by about 24 miles, to Howard and Anne Arundel Counties, but ends up contributing more to sprawl--or extending land development to areas not currently developed rather than intensifying development within already developed areas.
That doesn't help Prince George's County very much.
Ironically, this is the same argument that happened in Montgomery County under then County Executive Doug Duncan about an "inner" versus "outer" Purple Line alignment, with the latter focused on enabling greenfield development, and the former focused on intensifying extant places. See this 2000 article from the Gazette, "Purple Line has taken a circuitous path."

The problem with transit lines and stations in Prince George's County--the various subway stations as well as the railroad stations--is for the most part the stations aren't located in existing places--towns and cities like Bethesda or Silver Spring in Montgomery County--where you can leverage transit and build denser communities that are walkable and bikeable, where people can live without a car.
The Purple Line gives Prince George's County a second chance to do this. They had their first chance with the creation of the initial subway system. They didn't take it.
For the most part, only the development around the Prince George's Plaza station has worked to implement a transit oriented real estate development paradigm--and that is because in the early 1960s, one of the primary land owners understood that the area would get transit connections at some point--even though it ended up taking 30+ years. (See "Back to the future" a 2007 article from the Washington Business Journal.)
Oh sure, there is a station area plan for the West Hyattsville Station that's almost 10 years old. And there is a lot of activity at the New Carrollton Station. And on again off again plans for Greenbelt.
The Purple Line is, potentially, a game changer.
If Prince George's County can step up and realize it and take the opportunity.
Few communities get a second chance like this one.