The DC Public Library has announced that they have commissioned an advisory panel from the Urban Land Institute to study real estate aspects of the Downtown Central Library, the Martin Luther King Jr. branch. See "Martin Luther King Jr. Memorial Library Building Assessment Project" from the DC Library homepage.
This coming week they'll be doing their review, conducting interviews, and making a public presentation next Friday: 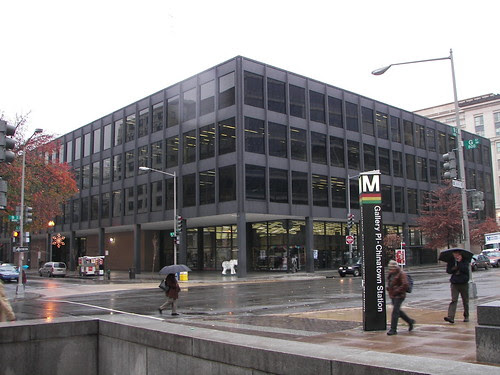 For many reasons this engagement has many of us up in arms--not because we think the Downtown Library is great necessarily--but because for the last seven or so years, the DC Public Library System has been congenitally opposed to robust planning--oh they've done plans but with very limited civic engagement and with significant flaws in the process--and they have been super-opposed to substantively engaging the city's citizens in the process.
Oh, and another thing that has us concerned is this statement by DCPL:

which is proffered with no citations, and appears to be counter to all the recent trends in the construction and development of central libraries across the United States over the past 10-15 years, especially if the library building is developed to have multiple programs beyond just "storing books." For example, the acclaimed Seattle Central Library, opened in 2004, is just over 360,000 square feet, the Harold Washington Central Library is over 700,000 s.f., and the Denver and Los Angeles Central Libraries were expanded with significant additions in excess of 400,000 s.f. 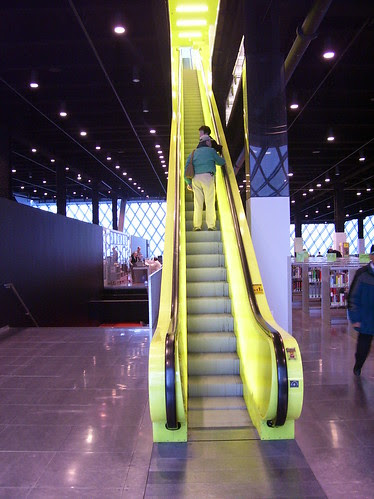 As a result, many of us are concerned that the ULI panel is one more example of flawed planning on the part of the DC Public Library and their general unwillingness to engage citizens into planning the future of the system.
(For better processes, one place to look is Seattle. See "A Tale Of Two Libraries Offers Lessons For Seattle," Neighborhood voice key in planning, Take an eye-opening look at our libraries," and "Seattle celebrates 'Libraries for all'" all from the Seattle Times.)
The DC Library Renaissance Project produced a press release on another perceived flaw in the process, "No DC Residents on MLK Advisory Panel."
Not that I want to defend the ULI, but typically their advisory panels are almost always constructed of nonresidents. I know this was the case for the Great Streets consultation in 2006 (press release listing the affiliations of the participants). And for the most part, ULI advisory panels turn out exemplary recommendations--really good stuff.
-- Washington DC Rail Corridor Redevelopment: Powerpoint; report
-- Implementing the Great Streets Strategy: presentation; report
-- Anacostia Waterfront Development: presentation; report
-- Full list of ULI Advisory Panel reports
Note that the ULI's publishing program, including advisory panel reports, and their meeting program is EXCELLENT, and an incredible resource, not just for the real estate developers who are for the most part ULI's intended audience, but for other stakeholders and government planners (who are also members).

There is something to be said for having people only from the outside, because even those of us who are planners often have blinders when we approach issues in our own communities (this is true for me, and I think of myself as a decent commercial district revitalization and transportation planner).

On the other hand, it means that the panels/outsiders are often disconnected from the local knowledge they need to be able to truly understand a project and make great recommendations.

Similarly, usually, the scope of a planning project is written pretty narrowly, and depending on (1) how willing the consultants and the client are willing to consider issues outside of the defined scope (most planners and clients are uncomfortable with this, and you have to budget for it) as drawn up in the contract and (2) whether or not the client, in scheduling site visits, community meetings, etc., is willing and committed to exposing the consultants to "alternative" viewpoints that challenge the status quo/people in power (typically this is very very very very very very rare), the ability of planning exercises to generate great vision is significantly circumscribed.

And because these types of planning exercises/planning reports are then taken and/or promoted as "God's Truth," the gaps and biases rarely get identified and addressed, but instead are built into the final plan.

So thinking about this in terms of the library is helping me to define the various gaps/flaws in planning processes, including:

1. Scope definition flaws--too narrowly defined, not willing to engage with issues outside of the scope as they are identified in the process;

2. Rational planning method flaw--related to the first, this has to do with the relatively static nature of the rational planning process, which unlike the "design method," is more focused on maintaining existing practices rather than, if necessary, challenging these practices;

4. Locality knowledge flaw--lack of knowledge of local circumstances (although this can be "cancelled out" by a greater awareness of best practices from elsewhere);

5. Failure to consider a wide range of best practice examples--people's awareness of what can be possible is constrained by what they know, so if you want to expand the range of potential solutions, it is essential that participants be introduced to a wide range of possibilities;

7. Lack of robust civic engagement processes--failures in civic engagement processes are the result of many different factors, including (a.) a lack of respect for citizens role in planning and government, therefore the process is designed to limit opportunities for civic engagement; (b.) inadequate time and/or budget--planning raises tough issues and to resolve differences of opinion and vision more time is typically required than is allocated for and budgeted within the process; (c.) failure to build knowledge building into the front end of the process so people don't learn, don't identify and address their biases and/or gaps in knowledge, etc., so what is achieved doesn't move things forward [my basic point here is think of all the various planning processes and the people involved, and ask yourself the question, "do most of the people involved get better, more able, and more skilled in the planning process as their result of their involvement, and their involvement in multiple planning projects and iterations?"--the answer for many is no.];

8. Weak planning frameworks--(this problem is the flipside of #6) in the context of community planning, there needs to be planning at (at least) three scales: the entire community; sectors/districts of the community (in DC these are called "Area Elements"); and neighborhoods (DC doesn't do neighborhood planning--small area plans aren't comprehensive neighborhood plans, they are management plans for development opportunities, and area elements aren't comparable to the "sector" plans created by neighboring jurisdictions). By not differentiating between these scales, typically there are significant gaps in the opportunities and civic assets made available to residents through the planning process.
In DC, one of the best examples of this failure has to do with parks and recreation planning, which typically doesn't ensure that residents have access to a complete array of facilities and programs defined by the city's urban setting. E.g., there's not one indoor track open to the public. Nor is there an exposition facility, comparable say to the facilities available to the community at the Thomas Jefferson Middle School and Community Center in Arlington County, Virginia.

It's so important to realize that every time you get upset, it drains your emotional energy.