Tower renewal: The Watergate and Southwest DC, and Toronto

Crankshaft comic, 11/27/2011.
Today's Post has an article, "Watergate’s decline accelerated by grocer’s exit," on the decline of the Watergate residential-office-hotel-retail complex in Northwest DC.
The complex is adjacent to a few dead zones--the Kennedy Center, a Foggy Bottom neighborhood significantly converted to housing precincts for George Washington University, parkland, an amenity, but not a big activity generator for the complex, and I-66. All make it hard to survive for the complex to survive as is.
Another problem with the Watergate complex is its focus on a higher end market as that audience seeks better connected locations (e.g., even the Ritz Carlton residences on M Street NW are just a little bit farther than the Trader Joes) and as more vibrant and new retail and residential complexes have opened up nearby in the Pennsylvania Avenue corridor, and closer to the subway station and to Downtown.
Even with the closing of the Safeway at the Watergate, it's not like the area is a food desert--for which the city would likely justify pumping in another Walmart--the area is served by newer and more vibrant retail options, including the city's only Trader Joes (less than one mile away as the crow flies but 1.0 mile based on being able to walk where bridges cross the roads) and a new Whole Foods Market at Washington Circle (0.5 miles away).
I'm not sure if the problem with the complex is its location, age and the physical decline of the facility, the relatively old age of the condominium owners, the high cost of the units and a decline in their appeal to younger audiences, the failure of the hotel, further reducing activity within the complex, the anti-human urban design of the Kennedy Center, the need for a larger number of residents and office workers to generate the support necessary for successful retail, and even with the supermarket, could an independent succeed where a chain store cannot, because of higher corporate overhead and other fixed costs.
When I read the story I joked to myself that maybe the residents could band together and create a food co-operative, or develop a senior aging in place program like Capitol Hill Village.
But then I was thinking that the issues are not unlike those that planning director Rollin Stanley sees as an issue in Montgomery County--that traditional subdivisions with large houses, populated by a lot of people around the same age in the 1960s and 1970s, have a difficult time regenerating as resident households age out and younger families aren't necessarily interested in taking their place in houses and living patterns that they may consider dated.
Clearly the Watergate complex is a candidate for "renewal" and a release from its basic urban renewal format--a complex of buildings inwardly focused in an area of minimal street activity.
Much of the time we don't think of "rich areas" as needing public planning assistance, but the issue isn't wealth or poverty as much as it is urban design and the transportation network, whether or not it is age-resilient
For example, the AARP is very active on transit issues and walkable communities these days out of a recognition that as people age, life in an automobile-dependent environment becomes untenable when you can no longer drive. 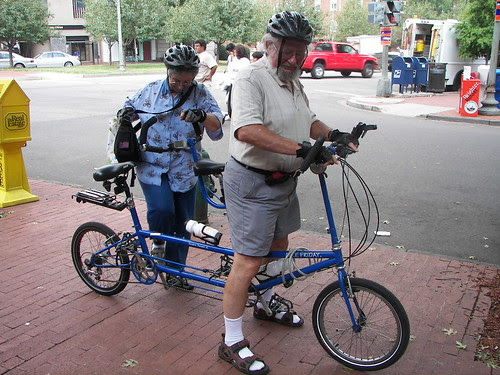 After this man retired--they live at Potomac Avenue Metro--he biked everywhere. After awhile he realized that by biking alone, he was excluding his wife, so they got a tandem bicycle and ride together. Among other places, they ride downtown to swim at the YMCA and to the Trader Joes in Foggy Bottom.
And increasingly, cities are seen as a desirable place to live during retirement because of the potential array of amenities available and the ability to get around without having to be automobile-dependent--walking and biking are options, as is transit, depending on the city and whether or not it has a high quality transit system. E.g., DC does, Phoenix doesn't...
Within the city, Southwest DC is a classic example of the urban renewal paradigm, in fact it was one of the test cases, along with New Haven, for the federal government urban renewal program. Traditional grid/block networks and rowhouse type housing were demolished in favor of the recreation of superblocks, large buildings (towers) set off by park type environments, and a focus on automobility rather than walking.
Over time, the area got tired. The area around the Metro stop, which was constructed in a manner that obstructed the street network (4th Street specifically no longer was continuous between the northwest and southwest quadrant), became tired and forlorn, as has the Maine Avenue waterfront district.
A couple years ago the area around the Metro station was rebuilt, 4th Street was reconnected, a new Safeway supermarket replaced the old, a plaza was created around the Metro, and new office buildings and housing were constructed.
The area around the Metro Station/M Street SE is so much more vibrant today, so much so that I was shocked, compared to my memories of how dreary and empty the area was not that long ago. (These photos were taken in the late afternoon, so there were fewer people on the street at that time.) 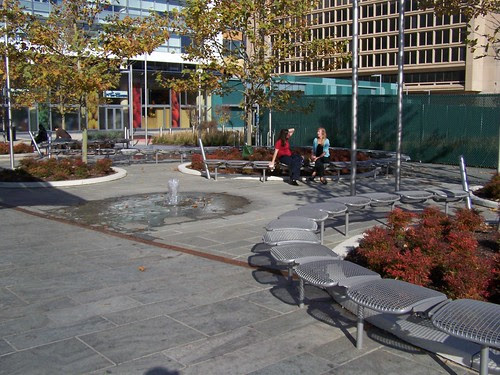 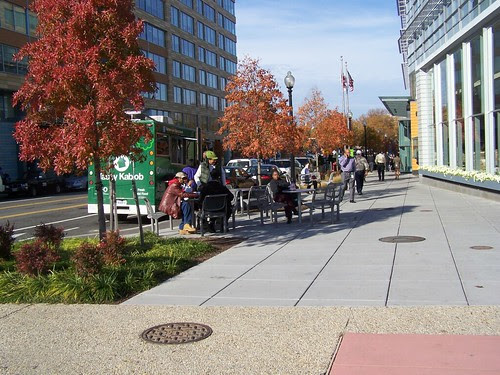 Top photo: while the area's redevelopment is incomplete, the attractive plaza at the Waterfront Metro station has seating organized in circles, a splash fountain, and a variety of trees and other plantings. Bottom photo: 4th Street SW, reconnected to the Northwest quadrant, is a much more active streetscape post-reconstruction, especially with the addition of tables and chairs as part of the street furniture set up in the public space.
The ongoing revitalization of southwest DC is not unlike how the area of "Downtown" north of Massachusetts Avenue up to New York Avenue is becoming a real community, with the addition of condominiums, apartments, and retail, including as it happens, a Safeway supermarket, but also a hardware store and restaurants including a branch of Busboys & Poets.
The Watergate complex needs a similar intervention to that which is occurring in Southwest DC, not just with the area around the Metro station but also the Waterfront, such as The Wharf District that is being created there, which will reconnect the city to some of its waterfront.
Toronto's Tower Renewal Program
While Toronto's high rise boom continues today with continued building of tall condominium buildings across the city--so much so that the Toronto Star runs a weekly feature by Christopher Hume evaluating the design of new condo buildings--at the same time they have recognized that multiunit buildings constructed 30 to 50 years ago are due for an upgrade, not unlike various HUD programs in the United States or the HOPE VI program, which has reconstructed public housing complexes to include market rate housing.
From the Tower Renewal blog:

The Toronto area contains the second largest concentration of high-rise buildings in North America. The bulk of these are aging mid century apartment towers, built throughout the City and its suburbs in the post-war boom.

The Tower Renewal Project is an initiative to re-examine this remarkable heritage, neighbourhood histories, their current place in our city, and their future potential in a green and equitable Toronto.

Key considerations for this multidisciplinary project include decreasing greenhouse gas emissions through building and site retrofit, as well as enabling ‘complete communities’ through the introduction of on-site mixed-use, community services delivery, usable open and recreation space, as well as new retail, housing and employment opportunities.

The funny thing is that the issue isn't really about the building stock is it, because subdivisions in Montgomery County can have the same issues that are present in multistory apartment or condominium buildings in Washington, DC like the Watergate.

Having communities with a variety of housing types matters, because then a variety of household types, market segments, and age groups can be accommodated. Single-use type places--be they apartments/condominiums or subdivisions constructed of the same type of single family house--become less resilient and capable of adaption over time, as the circumstances that shaped their original development change in the face of new social, economic, and demographic realities. The webpage from the Toronto Tower Renewal blog has dozens of links to articles about their project. This piece from APT Bulletin: Journal of Preservation Technology, is particularly good, "Reassessing the Recent Past: Tower Neighborhood Renewal in Toronto."

It also happens that the Toronto Star is running a three-part series of graphics on Vertical housing. The third installment will be next Sunday, and the additional graphics will be folded into the link
-- Vertical Toronto: The high life, Toronto Star 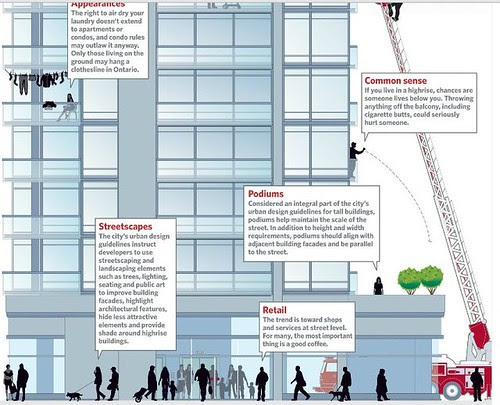 Extract from the Vertical Toronto graphic feature in the Toronto Star.
The Watergate story in today's Post merely indicates a need for more systematic planning for a similar kind of renewal of like properties in DC.