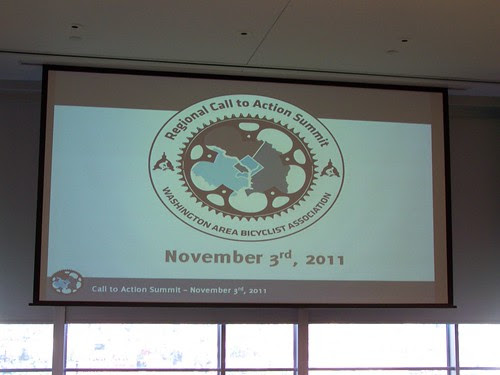 I am jumping the gun a little bit, because WABA--the Washington Area Bicyclist Association--hasn't quite yet posted its take on yesterday's conference, including uploading the pdf of their third "Call to the Action" (the first was in 1972, when the organization was formed, the second in 2000, after years of neglecting bike infrastructure in DC).
Even though I would have organized yesterday's conference differently, with mostly different topics focused on "regional" biking issues, I still learned something from every presentation.
1. Planning for Healthy Communities
-- I was reintroduced to the concept of Health Impact Assessments as a technique for promoting healthy, active outcomes as part of urban planning, site planning, and development decision making.
-- this model, from San Francisco, is one that we could use locally
2. Bicyclists in crashes
-- when you are in a crash, and people ask you if you're all right, always respond, "I don't know" because you don't, and because physical problems usually take awhile to manifest 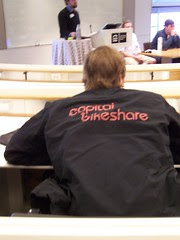 3. "Bikesharing"
-- this session featured presentations by three people, Eric Gilliland, general manager of the Capital Bikeshare program, Darren Buck, a student at Virginia Tech doing research on Capital Bikeshare and bike infrastructure, and Professor Ralph Buehler (who works with John Pucher) of the Virginia Tech urban planning program in Alexandria, Virginia.
-- while most of the questions were for Eric, I was especially intrigued by work that Prof. Buehler is doing on the nature of biking in the Washington region, and how the demographics and results compare to other regions, and that separately there will be eight presenters from around the world as part of a TRB conference workshop at the annual conference in January.
-- Darren had some interesting visual presentation of data on links between car ownership, presence of bicycle infrastructure, density, and presence of shopping destinations and bike sharing use.
I wish that the operations part of bikesharing would have been in a different session, so that more time could have been given to Prof. Buehler and related findings. Those papers should be available in December.
4. WMATA and bicycle accommodations
-- WMATA is doing a lot more. They've replaced all their old racks with 1700 inverted U racks, they are building a protected and secure bike parking facility at College Park, and are planning to do so at Franconia-Springfield, they would like to have protected parking at 56 of their 60 stations where they own the land. They have completed various other improvements for pedestrian access as well.
-- They have moved parking management functions for biking into the Parking Operations Department and are developing stronger information systems for bike lockers and other programs to better accommodate biking.
-- (I didn't know that) As long as transportation enhancement funding exists, WMATA is required to spend 1% of the funds they receive from the Federal Government on enhancements such as biking and pedestrian improvements, and while they cannot fund everything that they would like to do, this is a steady source of funding for bike improvements, so long as the enhancement program continues to exist.
-- they see that improvements for biking often are improvements for disability access.
5. Bike shops and Advocacy
-- while I wouldn't claim that I got actionable information from this session, a number of the presenters made good points
CALL TO ACTION SESSION 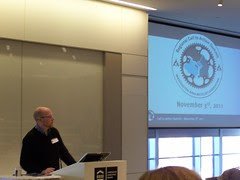 Shane Farthing, Executive Director, WABA.
I hate to put this last because this was the most important, but it was last on the conference agenda.
Shane Farthing, the executive director of WABA, made an EXCELLENT presentation, far far far exceeding my own expectations for what they were going to come up with.
In preparation for the conference, WABA held sessions in each of the jurisdictions. For the most part, they felt that people mostly focused on micro issues--e.g., markings on a particular street, etc.--and not the big issues. 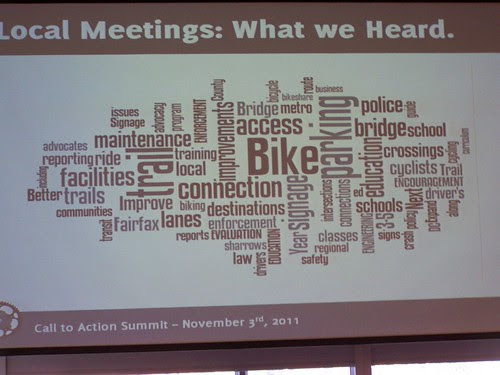 Issues expressed at the various local meetings and captured in a word cloud measurement graphical rendition.
Shane decided it was the responsibility of WABA to think really big, to lay out a vision of a truly bikecentric environment, where biking (such as in those places where the conditions support it, such as in DC, Alexandria, Arlington and other conurbations--this is my list not theirs) can truly be a significant mode, reaching and meeting the needs of the 60% of the U.S. population that says they are interested in biking, but aren't, because they aren't comfortable riding in mixed traffic/high speed traffic situations.
The focus is not just what in active transportation planning are called the 5 E's (engineering, education, encouragement, enforcement, and evaluation) but a 6th E for equity, all based on placemaking and quality of life.
Resources
-- National Household Travel Survey results, 51% of all trips are 3 miles or less (League of American Bicyclists blog post)
-- Roger Geller research, 60% of population willing to bike for transportation but isn't currently ("Portland's Bicycle Brilliance," The Tyee)
-- Transportation equity webpage, Victoria Transport Policy Institute
Business consultant and author Jim Collins would call this a "Big Hairy Audacious Goal."
He didn't lay out a mode split goal --for me in the city it would be at least 20% of all trips.
It was an inspiring presentation. Sure, it echoes things I've been thinking and writing for the last couple years, but I can hardly take credit for it.
I was really proud of WABA at that moment, that they could step out of the day-to-day, and think much bigger. That focusing on "adding one more bike rack" wasn't the point.
Another thing that I am really proud of them for doing is looking at what the organization does and what it should do and how to best use their (limited) resources.
I always get into a debate with people about direct service vs. focusing on bringing about long term, structural change.
Doing Bike to Work Day, as long as it is focused on the day as an event, and not as an event focused on harvesting the people and the energy as a fulcrum of potential change at the worksite, ends up absorbing significant amounts of resources, and while great for community building, doesn't contribute that much to long term change objectives.
So effective in 2012, the Downtown Business Improvement District is taking over the management and staging of the Freedom Plaza Bike to Work Day event, which is the biggest and best true, but now WABA, which face it, has limited resources, can do more and better and other things...