Low income, high income, the market and the right to the city

There are some pieces on "gentrification" out there that are getting play, but I don't think they contribute to the discourse much, because they don't make connections to earlier work on the topic.
In Salon, Will Doig has an article, "Can gentrification work for everyone?," on higher income "African-American" "gentrification" in Anacostia, and Southern California NPR ("The cultural mashup dictionary: gentefication") and WAMU, the NPR affiliate in DC ("Gentrification, Try Gentefication"), have a couple of pieces on the same subject, the Cali piece focuses on Latinos.
The process of reinvestment described in the "gentefication" process is similar to the way some immigrants continue to invest in their old communities as described in Arrival City by Doug Saunders as well as many articles in the media (I can think of articles from the Los Angeles Times and the Washington Post and the New York Times specifically) about how Latino immigrants in the U.S. invest in their communities "back home" and how this changes those communities. It's just a matter of focusing that investment on "arrival neighborhoods" in the U.S. instead of back "home." And it's just a scalar difference from earning money abroad and sending it home to the family--economists call it "currency transfers."
Two things that make the discussion of gentrification difficult in the US concern how people still tend to (1) believe that living in cities is undesirable and is counter to most trends concerning residential choice; and (2) ignore class/economic distinctions, or make sweeping generalizations about them, thinking that most people of color (African-American and Latino in particular) are poor.
They also don't think much about the fact that the US is decidedly a market economy, albeit with plenty of government intervention in the housing market (both policy and financial), and for areas in demand or areas that become more attractive, good deals/low prices lead to increased demand, and in situations with increased demand, people with more money win out over people with less money.
Just like how some people believe that only white people can be racist (not true), others believe that only white people moving into center city neighborhoods are "gentrifiers."
By thinking this way, what they fail to appreciate is that the process of in-migration of this type is about money and class, not race.
-------------------------
This excerpt from a past blog entry is about 7 years old:

Gentrification effect (2) is what I think people really mean when they are talking about "gentrification," new and different people coming into a neighborhood. Of course, in neighborhoods like CH, displacement is really happening.

As far as displacement goes, it's part of what people call "gentrification". But gentrification is phenomenon with multiple effects, which I describe as:

(2) change and different people coming into a neighborhood -- most importantly, different people from those currently in residence (the differences--race, class, ethnicity, levels of educational attainment, attitudes toward the urban experience, etc.--are usually not "celebrated" (I make this point because I still remember first being taught about diversity and multiculturalism in 7th grade, and I specifically remember the "melting pot" and "celebration of differences" phrase -- I have a hard time seeing the celebration, at least in DC);

(3) increase in conversion of previously rented dwellings to owner-occupied, leading to a displacement of renters and an overall reduction of the number of rental units available in the neighborhood;

(4) related to the new demand for living in the neighborhood is an increase in rental rates, which contributes to the displacement of low- and moderate-income residents;

(6) faux-displacement as long-time residents decide to "cash out" and take profits on the sale of the finally appreciated property (this is accelerated by, in my opinion, the still prevalent pro-suburban, anti-city attitudes embraced by particular demographics that tend to represent the long time population groups in traditional center cities); and

(7) ongoing increases in property tax assessments which contributes to the displacement of longtime residents on fixed or lower incomes (note that this effect is hard to separate out from [6]).
------------------------
While the academic study of gentrification focuses on national and global processes of "the reproduction of space" rather than seeing gentrification as mostly an issue of race, I still believe that the urban sociology subfield of gentrification in the U.S. has one major flaw, that the cycle of urban development should go only one way--outward, and that neighborhoods are born; grow; and decline, and in the declining phase become home to the less well off; rather than recognize that decline is not inevitable when considering multi-decade time frames.
This is based on the 1920s work of the "Chicago School of urban sociologists," in particular Robert Park and Ernest Burgess. Their work was based on the idea that the well off wanted to be separate from the less well off and so they continually moved outward from the core of the city.
As neighborhoods were "abandoned" by groups as their economic situation improved, they were replaced by new immigrants and in-migrants and the process began again. This process has a number of terms to describe it, including invasion-succession theory, ecological succession, or concentric zone theory. And the 1970s housing improvement theory called "filtration" is based on this idea as well. 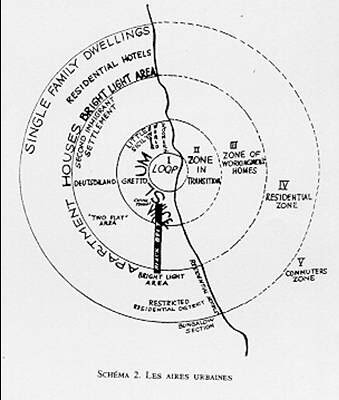 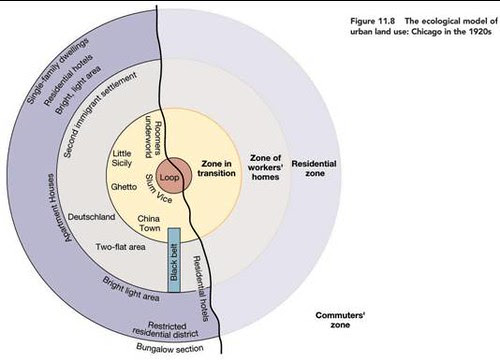 I liked the test and the site very much. thanks.