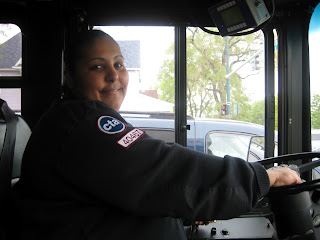 Image from the blog entry, "Grace: The Nicest CTA Bus Driver Ever" from the Go Shorty blog.

I think being a bus driver is one of the hardest jobs around because:
(1) not only do they have to deal with riders, who can be rude;
(2) they face the constant threat of potential dangers--bus drivers are alone and therefore face threats from some riders, especially when it comes down to ensuring that fares are paid;
(3) driving a big vehicle in traffic, when other vehicles don't pay your vehicle much mind is very hard; and
(4) likely they face a fair amount of management direction and control--even though when they are driving, they are independent.
Bad service from bus drivers
On the other hand, a lot of bus drivers can be jerks. Witness this recent article from Baltimore Brew, "Once proudly car-less, Baltimore bus rider bails after final insult: "No business, not even the MTA, can hope to survive with that kind of employee." ( Also see "MTA responds; plus, more bad bus stories.")

... What unfolded yesterday morning, however, was different. It was the last straw in a run of headaches and frustrations that make the Maryland Transit Administration buses, for me, an unrealistic option.

As I sat waiting on the MTA-provided bench at the Fleet and Albemarle streets bus stop for the No. 11 bus at 9:08 a.m., I was getting a jump start on the day’s emails and appointments with my smartphone. As I heard the familiar sound of the bus approaching, I looked up to watch the No. 11 continue right past me without ever slowing down.

I jumped up and chased the bus on foot – in my work attire and carrying my work bag – and actually managed to catch up to the bus at a red light about one block from the dedicated stop where it drove right past me.

As the bus was stopped at the red light, I knocked on the doors to be let in, but instead the driver looked at me through the glass of the doors and yelled, “Next time stand up!” Then he drove away, leaving me standing in the street.

Of course, the DC region has a number of bad examples too, e.g. this blog entry from 2010, "When the union label may be terrifying: transit edition." That being said when I was riding the MTA bus service regular in 2009 and 2010 I felt that the MTA drivers were better than the bus drivers for WMATA, at least in DC.

Plus, for most of this week, bus drivers in Phoenix and Tempe, Arizona were on strike. While the director of the contractor, Veolia, running the service didn't seem to understand why the strike was occurring, as recounted in this op-ed, "Westbrook: You should ask: Why the strike?" in the Arizona Republic, oddly enough it appears the strike was a tactic to get the City of Phoenix to reduce its penalties for service failures, so that the contractor would have more money that they could use to fund raises. See "Phoenix-area bus strike has been 22 months in the making" and "What's at stake in Phoenix bus-driver strike" from the Arizona Republic.

Where are transit unions on the value and importance of customer service?

I raise these counter-examples wrt bus driver appreciation because I don't think transit unions express much concern for the driver-rider experience.

Many drivers do bad things, and the drivers for the most part go unpunished, and the union stands up for following procedure etc., not ridding a transit service of employees who don't properly represent the value of the transit service.

A lot of the time this is ignored, because in most communities transit truly is a service of last resort for people who have no other choices.

Note that the Market Urbanism blog had an entry last year, "Five union work rules that harm transit productivity," about how union work rules drive up the cost of transit. Certainly, most of the need to increase fares in the DC region for next year's transit service has to do with personnel-related costs.
If we want transit service to succeed, especially for choice riders, the service and experience has to be high quality. This point doesn't need to be belabored. It's obvious.
Just like other professions--taxi drivers, airport workers, hotel workers, restaurants in tourist areas, etc.-- where the workers are front line personnel serving visitors and the community at large, so the local convention and visitors bureau invests in training these people, transit workers need "hospitality training" too, and the training needs to be updated and refreshed constantly.

See "CROSS­CULTURAL TRAINING FOR HOSPITALITY AND TOURISM: IMPROVING SERVICE ENCOUNTERS THROUGH INDUSTRY­TARGETED CRITICAL INCIDENTS" and this document on a proposed hospitality worker training program for Michigan, as well as the Detroit Orientation Institute.

That being said, I've come across many great bus drivers, who probably don't get enough commendations.

I know that every time I ride the bus, when I get off, I say thank you.