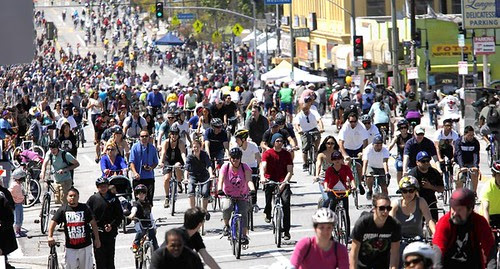 For years I've "critical analysis-ed" (some people consider it "criticism" and negative) DC's rather timid attempts to copy the Bogota Ciclovia program of closing off streets to the car on the weekend, in favor of activities favoring walking, cycling, and health/wellness generally. Many communities in North America have developed such events, including Baltimore, New York City, and Los Angeles.

See the past blog entry, "Speaking of Sunday Streets."

Apparently, about the best we've done is a couple hundred people at the event that has been held in Fort Dupont.

Yesterday, CicLAvia in Los Angeles had about 100,000 attendees! See "CicLAvia draws some 100,000 cyclists, skaters, pedestrians:
The car-free event, closing 10 miles of streets in downtown Los Angeles and beyond, brings people outdoors to explore different neighborhoods and enjoy the spirit of a citywide block party" from the Los Angeles Times.

In a conversation a few weeks ago with the lead bicycle planner for the LA MTA, she mentioned that CicLAvia is a big event for the transit agency, because people--with bikes and without--use the transit system to get to downtown for the event, and that CicLAvia has become an important event in terms of marketing transit.\

Another way to leverage such events.