All the talk of e-government, digital government, and open source government is really about employing the design method 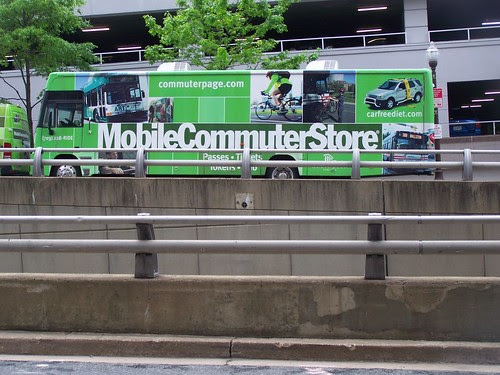 Arlington County has a number of bricks and mortar "Commuter Stores" which sell transit media and provide information on various sustainable transportation modes.  They also have two mobile stores, which they deploy around the county, at festivals, etc.

I have written about what I call "action planning," which is based on my observation of some best practice "government" programs like Arlington County's transportation programs (transportation demand management, BikeArlington, WalkArlington, FitArlington, the CommuterStore, the Car Free Diet, and relatedly, FitArlington), the Live Baltimore resident attraction and recruitment program, and the re-positioning of libraries in the Tower Hamlets borough of London as "Idea Stores."  See the past blog entry "Social Marketing the Arlington (and Tower Hamlets and Baltimore" way."

I've since updated my thinking about action planning as discussed in that entry to make the link to civic engagement and participation more direct. 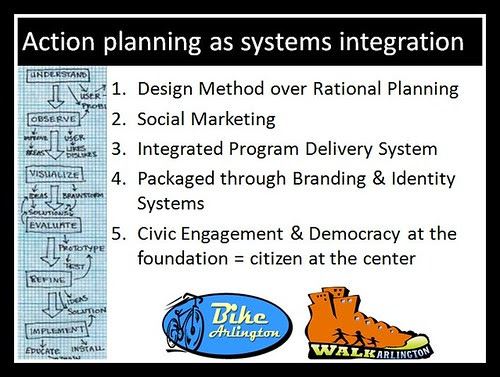 The key element is using the design method, which is iterative and dynamic, rather than using the traditional "rational planning" method which is the foundation of urban planning and public administration, which tends to somewhat static and not very open to new ideas.

This is the biggest problem with traditional planning, that it is pretty focused on maintaining things the way they are already, unless they are not working well, which allows for some change. 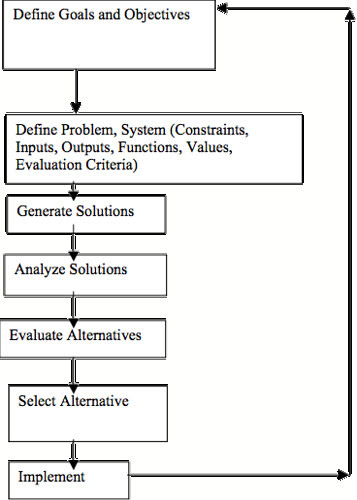 John Friedmann captures this dynamic in his discussion of how government is organized in Planning in the Public Domain.  Most of government or "the system of political order" is focused on system maintenance. 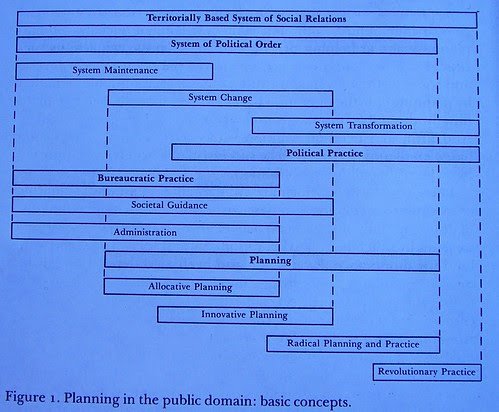 Anyway, there is plenty of good discussion about the design method and "design thinking," from books by the principals at the Ideo design consultancy, the d.school at Stanford, and writing in magazines like Fast Company and Wired. 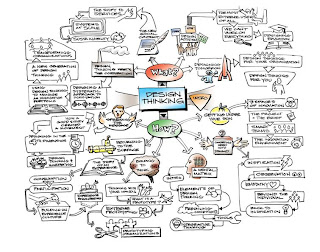 And there has been plenty of breathless coverage about how social media and apps and the web and the cloud will change government.

That kind of coverage has always left me unsettled because to me apps are just processes.

A great app for reporting problems makes it easier for citizens to report problems, but if the government agency responsible for dealing with the problem is no more responsive in the face of the app, it doesn't really matter how a citizen reports a problem. 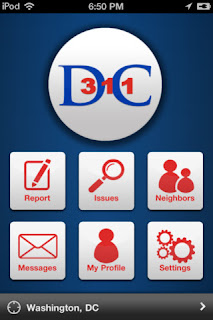 There is no question that the quality of the design and operation of processes really matters.

Lacking a central repository for reported problems likely contributed to the death of a cyclist in Seattle, who not realizing a trail ended, because there was inadequate signage, rode down a stairwell, crashed, and died.  See "Long-time Vivace general manager seriously injured in bicycle crash" from the Seattle Bike Blog.

Reading this piece, "The open source problem solvers creating government 2.0: Meet the new breed of technologist who's hacking the government at every level to make it work better for you," from the Guardian about how "open source software" is changing government, I finally came to the fundamental conclusion that what "open government" is really about: process redesign.

Process redesign is nothing new.

In fact, it's the approach I take to planning and public administration as a matter of course, although I sometimes call it gap analysis and reverse engineering, based on figuring out mismatches between preferred outcomes--which should be generating as a matter of course "improvements to quality of life"--and recurring outcomes, which tend to not be improvements in quality of life.  Then I look backwards at the processes generating the current outcomes, and try to come up with new and more robust processes that will instead generate the preferred outcomes, all the while trying to figure out how to bring about changes within conservative organizational environments.

So "open source government" is aided by "apps" and engaging new people into the process, but fundamentally, it's process redesign, not much different than the initiatives pushed by the Reinventing Government people back in the late 1980s.

But there is a key difference.  There is an openness to change when there wasn't before, maybe because the "app"/computer/mobile device provides a touchpoint/entrypoint for reconsideration of how to do things.

Another difference is that more people are trying to get involved, they have the means to produce "solutions," and for some reason, more governments, probably because they are financially strapped, which leads to what I call "a desperate willingness to experiment because they have no other choice" are more open to accepting "outside the box" "solutions" than they would be if times were different.