Missing the point about performance parking 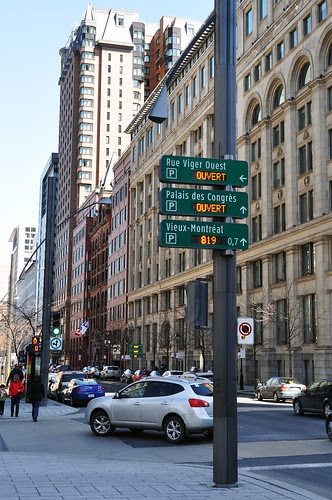 At the foundation, it's about planning, planning for parking and curbside space management in an integrated and comprehensive fashion.  Too often, people think it's about maximizing revenue, by having the ability to charge higher prices based on demand.

Certainly, the ability to increase revenues is what drives DC's elected officials interest in it, not an interest in better managing transportation and mobility within the city.

The interest in parking in the planning field has been sparked by UCLA Professor Donald Shoup's textbook coverage of the subject in The High Cost of Free Parking.

-- chapter 1, from the The High Cost of Free Parking

The basic point is that free parking is actually expensive, because it costs money to support, and shapes land use and building design in ways that are often deleterious to community success and quality of life.

But many people seem to be focused on his later experiments and recommendations for market prices--dynamic/variable pricing, where the price rises and falls depending on the time of day and the demand at that time--without being familiar with how Shoup's lessons were drawn from his experience consulting for the City of Pasadena, in particular the downtown commercial district and the parking structures owned by the city.

So he suggested that street parking be priced higher per hour than the equivalent cost in the parking structures, additionally, to drive parking to the structures, they also make the first 90 minutes free.

To address the concerns of the proprietors of businesses in the commercial district, who preferred low-priced parking because they believed it to be key to the success of their businesses, he recommended to the city that they spend the bulk of the revenue generated by the parking meters on public space and other improvements to the commercial district.

He also recommended that hours for which fees be assessed be extended into the evening and on the weekends, even on Sundays (eventually).  Because the business district was getting the bulk of the revenues from the program, they saw this as acceptable.  And later, they rolled the revenues from parking enforcement into the program as well.

It's worked.  Downtown Pasadena is wildly successful--in part because of the investments in the commercial district that came from the parking revenues--a regional destination, in one of the most competitive regional retail landscapes in the U.S., Southern California.

But the point here is that Pasadena planned the utilization of on-street parking and off-street parking in an integrated and comprehensive fashion, and provided benefits for the local business district at the same time, to assuage their concerns about potential loss of business.

In DC neighborhoods, "performance parking" programs are being used to over-privilege residents for access to scarce parking spaces, while at the same time increasing the price of parking and generating revenues for neighborhood improvements.

I think the latter is a good thing, and the former is a bad thing.  Residents get virtually free parking--the cost of a residential parking permit is $35/year (it had been $15 for decades), for spaces that are worth in excess of $1,000/year.  Residential permit fees don't cost more either as the number of cars in a household increases or with the size of the vehicles

So in residential areas, it's a program that's only half "market" oriented, on the visitors, but not the residents.

Downtown, the city is introducing performance parking, to raise revenues.  The City Paper Housing Complex blog, in "Why Performance Parking Will Underperform," argues that this program will be undercut by private parking enterprises seeking to increase revenues.

I disagree, not because the theory is wrong, it's not, merely basic economics, but because the downtown parking structures are managed more as services for building owners, to manage tenant parking demand.  The structures are not managed to maximize revenues by focusing on meeting parking demands for visitors.  And DC's parking management firms are not heavy hitters in the industry, the action is generally elsewhere, as are the major firms in the field.

Sure there is a reasonable amount of parking sold, for sporting and other events, but for the most part, parking structures in the city's office buildings are closed at night.

What the city needs, as part of a Master Transportation Plan, is an element on parking and curbside management.  And it needs to provide planning guidance for both publicly owned parking (street parking) and privately owned parking.  And it shouldn't merely be focused on the revenue maximizing potential of street parking at the exclusion of other transportation planning goals and objectives. 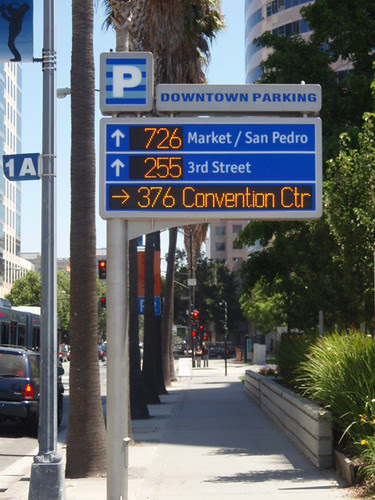 I don't think the idea of the Downtown DC Performance Parking program is focused on generating money for public space and other investments in Downtown.  If it were, then maybe a parking wayfinding signage system could be created, comparable to say, San Jose, California, where a system of signs communicate information to drivers about available spaces in various structures.

DC's Downtown Business Improvement District wants to create such a system, but because DC doesn't own parking garages (lobbying by real estate interests and people such as the late Lloyd Doggett have prevented the city from building or owning parking structures), DC doesn't have the financial motivation to build such a system.  And individual building owners and parking management companies don't have such a large inventory of spaces in buildings to make such a system cost-effective on an individual basis either. 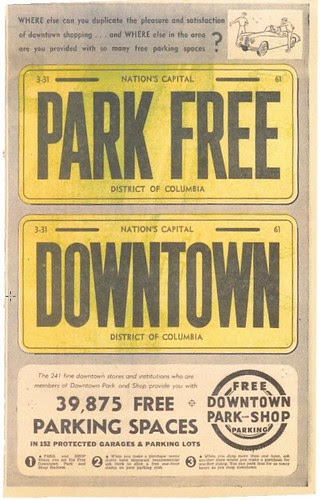 Ad, Washington Post, 1/22/1961, page A11.  In the 1950s-1970s, downtown retailers and parking structure owners developed a coordinated parking management program, in an attempt to maintain Downtown's competitiveness as a retail destination vis-a-vis the new shopping districts opening in the suburbs.