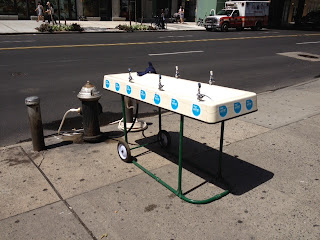 Photo by John Massengale of a water fountain sourced by a connection to a fire hydrant.  (In water utility discussions, people lament how two different systems of water service--one treated water, the other untreated water--weren't created at the outset of the development of water utility systems.  OTOH, this is a side benefit.

2.  Phoenix is going to install a solar-powered "cooling" station in a light rail station.  From "Valley Metro to use solar power in cooling system" in Metro Magazine:

NRG Thermal LLC, a subsidiary of NRG Energy Inc., is building an innovative system that uses solar power and the company’s downtown district cooling system to provide cooling to the seating areas of the popular 3rd Street/Washington Valley Metro (Metro) light rail station. The system will launch this July and operate May through September annually, when summer temperatures often exceed 110 degrees.

“I was able to experience a similar system during a business trip to Dubai and brought the idea back to Phoenix,” said Phoenix Mayor Phil Gordon. “NRG took the ball and ran with it, investing its money and expertise to make this happen. This solar-powered system will make riding the light rail in Phoenix even cooler. It’s an example of public-private partnership at its best.”

3.  I think that misting stations, which you often see at summer festivals like Baltimore's Artscape, could be installed in walking-oriented commercial districts and on bicycling routes. 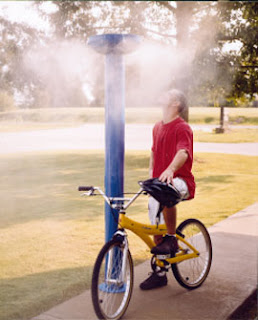 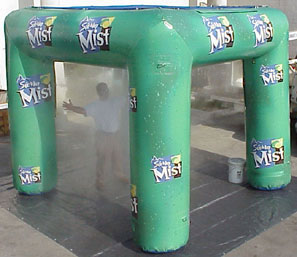 4.  Apparently, Promotional Design Group makes promotional misting stations, which feature an advertiser-sponsor, as shown in the image on the right.  They are a little garish for my tastes, but workable in a pinch.

Hiii,
We also carry combination inflatable packages that maximize a small budget for startup Inflatable Companies eager to get into the inflatable business. Thank u...

Hello,
A new design of Concrete walls panel that enhances thermal insulation of buildings by adding a gypsum layer inside concrete is presented. Thank u...

Hiii,
Thank u for nice post Exterior cladding may not be something that you give a lot of thought, but it is what keeps a building safe when weather happens.