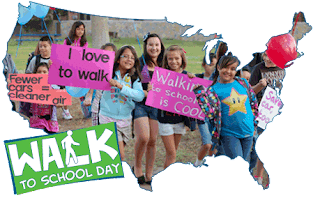 I have been meaning to write an omnibus entry on "back to school" issues but am way behind in terms of intent vs. action, but here can deal with walk and bike to school issues.

The reason I am a transportational bicyclist is because I need to exercise regularly for health reasons (my father and uncle both died of heart attacks at the age of 54), I am not organized or disciplined enough to join a gym, and it's often faster to get around by bike than by public transit (or driving).

The best way to develop healthy sustainable transportation behaviors is to start young, with walk and bike to school programs.  See the walk to school guide from Rutgers for more information along these lines.

There are various press reports from time to time about banning of biking to school or walking to school, because there are no sidewalks or safe routes for biking.

There have been whiny letters to the editor in the Post over the past week or two because of traffic jams at schools.  Note that as much of 30% of neighborhood traffic during morning rush hours derives from driving children to school.

And residents in places like Arlington are protesting because their children now have to walk to school because they live in the walk zone for their neighborhood schools ("Prohibited from buses, Arlington families walk to school" from the Examiner) although if they jumped on buses it had been allowed before.

1.  First, require school systems to do balanced transportation planning, including walking and biking, rather than to focus exclusively on busing.
I made this recommendation (although it was excised from the posted draft) in the Western Baltimore County Pedestrian and Bicycle Access Plan.  Although more school districts are doing this if only as a budget containment measure.

Mostly school districts focus on busing students to school and walk (and bike) to school programs aren't developed and supported by school systems as a matter of course.  Instead they are ad hoc efforts pushed by interested parents.  Some programs end up being wildly successful while others fail.

Of course, the places with the best walk (and bike) to school programs provide systemic-structural support for the programs.  For example, Minneapolis has a citywide walk to school plan (Minneapolis Safe Routes to School Plan).  The school district in Boulder, Colorado includes walk and bike to school planning in its transportation operation.  Many of the schools in Boulder have 50% or more children walking or biking to school, which significantly reduces the amount of money needed for bus-based transportation.

In the 1990s, Washington State changed the way it provided money to school systems for transportation, allowing the funds to be spent on sidewalk and other improvements, not just busing. 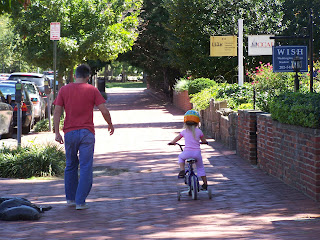 2.  Site schools in places where walking and biking to school is the best way to get there, remembering that schools are basic building blocks for successful neighborhoods (see the past blog entry, "Rethinking community planning around maintaining neighborhood civic assets and anchors").

Partly this has been a problem because school accreditation processes "require" large campuses and single story schools, which has led to siting schools in areas where to get there, you have to ride a bus.

The National Trust for Historic Preservation has a number of resources on this general topic, because often older historic schools were being shuttered and replaced by those new schools out of town.  See the NTHP webpage Community Centered Schools and the report Helping Johnny Walk to School: Policy Recommendations for Removing Barriers to Community-Centered Schools.

The New York Times had a story recently, "Gervais, Ore., Schools Go Into Real Estate," about a school district in Oregon that is closing its outlying schools, and refocusing its resources on the in-town schools in walk zones.

3.  Require transportation demand management planning for individual schools, and in DC, not just for traditional public schools, but for charter schools as well.*

The State of Washington requires that all K-5 schools produce a safe routes to school (walking and biking) map and recommends that each school system create a traffic safety and transportation committee to deal with walk to school issues.  The state publishes an excellent guide that I highly recommend, School Walk and Bike Routes: A Guide for Planning and Improving Walk and Bike to School Options for Students.

In the UK, schools are required to develop travel plans: see the manual Developing a School Travel Plan and webpage from Sustrans.

* Many charter schools are located in industrial zoned areas because they can find larger buildings there.  This creates significant opportunities for problems by mixing industrial, school and other traffic during rush periods.  It's especially a problem on 8th Street NE where two or three charter schools are located, the street route to the Metropolitan Branch Trail is there, and a few industrial concerns, and other operations that produce a lot of traffic.

One of the problems of improving transportation management at schools is it can discourage walking to school, by making driving to school more convenient.  While I can't find the letter to the editor, I know that if the writer's child's school implemented a kind of valet service, where the children were just dropped off, the door opened by a volunteer parent attendant, rather than having the parent park and escort the child to school, that the problems of the one hour wait that he experienced would go away.

I know, because I witnessed how this works at Stoneleigh Elementary School in Baltimore County when I worked in the County.  Stoneleigh is a national best practice example of walk to school programming.  See "Trying To Put Pupils, Parents Back On Feet" from the Baltimore Sun.  I joked that the principal basically created a school site TDM program, she had it down to a science, where students of different grades entered the school through different doors, etc., and by doing this she could minimize the time students needed to settle into the school day and was able to maximize instruction time.

4. Ensure that there are "Safe Routes to School."

There are federal and state programs that provide assistance to local communities in focusing resources on exactly that, although many communities don't like to participate in the program, not because they are against improvements, but because of the reporting and other application requirements, which can be burdensome.

The Starkville in Motion advocacy organization in Mississippi is particularly good at focusing community resources on improving the infrastructure for walking and biking to school and should be looked at as a model for how to effect changes.

When schools are sited within neighborhoods, infrastructure improvements for walking and biking benefit everyone, not just children.

-------------------------
P.S.  It does bug me when local advocacy organizations state when asked questions in meetings that there are federal monies for Safe Routes to School.  Of course, with the changes in the transportation bill, that's no longer the case.

But the reality is that many local transportation/DPW departments don't want to participate in the SRTS program because of the reporting requirements.  That's fine.  Just commit to doing infrastructure and programmatic improvements using other funds sources.

Again, if school districts are required to do balanced transportation planning, it's much easier to coordinate improvements between school systems and DPW/transportation departments.