Fire and emergency services (in DC)

There is a hearing today on the "Fire Department," of which 80% of their service calls are for emergency medical services ("D.C. fire department labor-management strife complicates issues of response time, staffing" from the Post).

A couple weeks ago, an injured police officer had to be transported to the hospital by a Prince George's County medical unit, because even though DC had available units, none responded.  And since then, the union of fire fighters had a no confidence vote in the chief, Kenneth Ellerbe. ("D.C. fire chief to appear before council in wake of union's no confidence vote" from the Washington Post).

While there is no question that DC FEMS has had management problems, especially with regard to emergency medical service, for more than 30 years (in college I met someone whose sister was a special assistant to the then DC fire chief, working on the verysame problem), I am not inclined to give much support to the firefighters union and their vote.

Their primary objective, and the same goes for the police officers union, is to always rail against "management," even if occasionally, I agree with one of their positions on a particular issue.  I've never seen them put out plans that advocate for better service because of management failures.

The fire fighters union in particular is enervated because Chief Ellerbe wants to change how they work.  Right now they work a 24 hour shift every 4 days, or about 8 days per month, which allows some of them to live far away (like New Jersey) or have second jobs.

While the community wouldn't sign off on it--especially because the fire fighters union is very active in funding local elections--probably we need fewer fire fighting units and more emergency medical units.  See the past blog entry "Rationalizing fire and emergency services."

And I don't understand the allegations of the department being short of equipment because under Mayor Williams almost all of the equipment was replaced, and Mayor Williams has only been out of office for less than 6 years.

But I will say I disagree with the proposal to have zero of the vehicles with the most advanced life saving equipment available overnight ("D.C. fire chief wants to alter overnight ambulance service," Post).  Having some of this equipment available then--even if it is rarely used--means that the city is prepared for all types of medical emergencies, rather than the ones that come up most frequently.

The problem here is multi-fold.

(1) The structure of how the city provides fire fighting services and emergency medical services needs to change in general.

(2) The fire fighters don't like the idea of changing their scheduling.

(3) The department probably still doesn't have the right skill set  with regard to the management of  emergency medical services.

(4) The department doesn't have the right proposals for the service footprint and structure for providing emergency medical services.

I hope the hearing is able to focus on these separate and conflicting issues.

From the above-cited 2011 blog entry:

Not too long ago, someone asked me why a fire engine and crew was the first responder to emergency calls, even though most didn't involve fires. I said "to keep firefighters employed."

Governing Magazine has a good article, "Firefighters Feel the Squeeze of Shrinking Budgets," about using data and technology to rationalize firefighting and the provision of personnel. It happens that 4 out of 5 "fire calls" are for emergency medical services. From the article:

At the same time, most calls are either false alarms or not particularly serious. Yet too few fire departments have adapted very well to these realities. For example, San Jose still sends an attack pumper with a full complement of four firefighters to all emergency medical calls.

Tying up four firefighters and a rig for what usually winds up being minor medical emergencies doesn’t make any sense, says Bruce Hoover, chief of the Fargo Fire Department in North Dakota. Fargo’s protocols used to mirror San Jose’s exactly. But now Fargo fire trucks only roll if “there’s bleeding, breathing complications or trauma,” Hoover says. “We now only respond for true medical emergencies, and that’s cut our run count back by 1,000 a year, and has kept apparatus and manpower in place for real emergencies.” ...

What drives firefighting in the U.S., for the most part, is long-standing practice, not good, current information on what’s actually happening on the ground, including number of calls, response times, seriousness of the incident, geographical distribution and time of day, all measured in relation to the geometry of fire service manpower, equipment and deployment.

For example, in one jurisdiction that asked the ICMA to come in and do a thorough analysis of demand, resources and deployment, the ICMA team looked at the busiest five minutes the fire department had in a year. What did the team find? Even at its busiest moment of the year, the city still had seven idle units standing by ready to respond, with 28 available firefighters. Those are just the sorts of analyses -- in combination with the current budget crisis -- that have emboldened policymakers and budget writers to start asking tougher questions about what fire departments really need and how they do business -- and asking them to either hold the line on budgets or cut back.

The article discusses how in the immediate post-9/11 environment, firefighters were sacrosanct, but now, with pressed local government budgets, more rationalization, wage reductions, and the like are occurring. A little less relevant to the DC region, where such services are provided on a county-wide basis in most places, the the article sidebar, "4 Ways to Rethink the Firefighting Game" mentions that small communities can save resources by providing fire services are on more regional basis.

The sidebar mentions also how one community uses small SUVs staffed with one paramedic and equipment as the first responder to many of the emergency calls that don't warrant sending of full EMS vehicles. (This is not unrelated to my point that smaller fire trucks could be deployed for alley calls.) 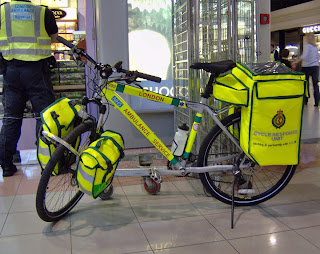 Relatedly, in some cities, especially in Europe, there is an EMS bicycle/motorbike unit, with emergency responders based in districts with a high density and/or demand for service.  They may also be deployed in this manner for special events, such as at Baltimore's Artscape.

in Gessford Court parking is not allowed because the fire trucks cannot get into the alley- and often street fronting neighbors and others ignore the rules - which make sense- once a fellow had a heart attack and the ambulance could not get in the alley as cars were blocking both sides of the alley. This is not fair. I happen to like the no parking rule laid down by the fire chief as it makes our alley a hell of a lot more livable and less car centric. But yes- I also think that the city needs to invest in snow removal equipment and other vehicles that are smaller- so much of their fleet is suburban oriented and useless in many old areas- which are actually a lot like Europe. The city needs to get with the times- but please keep cars out of our residential alley !!!

It is a huge problem. Because firefighters are esentialy part time, they have a lot of time to mess around in politics, and in almost every state I've worked in are very key players.


And yes, you don't need a ladder truck roll for EMS calls.

(In communist Arlington, you'll remember the firefighters union did get smacked down hard though)

Well for many decades, I've described myself as an inner city progressive, where my post-college knee jerk liberal attitudes have been ameliorated by the reality of dealing with life in the inner city and dysfunctional municipal institutions... it didn't help that I came here in 1987, about the height of Marion Barry...

Very good points, this is exactly the sort of problem we have here in Cincinnati and I'm sure in countless other cities. Sending out the full-size pumper/ladder truck to every call, whether fire or not, is a waste of resources, equipment, and manpower. It propagates the problems of wide streets, large turnarounds, and vehicle accommodations that make our neighborhoods more dangerous. It saddens me to say this, but I think many of these fire departments are exhibiting a "boys and their toys" mentality. Big trucks, lout sirens, lots of flashing lights, it's all macho chest-thumping, and it's wasteful.

a piece in the apr. 2014 issue of Governing Magazine called "Fewer flames and a shift in focus" discusses this issue, and how some departments are refashioning their response to medical emergencies, using specially outfitted pickups etc. to reduce the cost of fuel and personnel going to medical calls.

Since this blog entry was published, DC has added the use of private ambulances to the mix, transporting people in many instances, keeping EMS vehicles in service, rather than as transport vehicles.

It has been very useful, I was looking for something similar,greetings and thanks.

I bought a Fire Safety Equipment from Western Fire and Safety Company. The company was so rapid in responding and provided me with the exact equipment that comprised all details.

The range of Fire Equipment products is nominal when compared to different companies. They are big enough to handle the multiple needs but small enough to keep a personal service touch.

The company provides the right kind of fire risk assessment. I highly suggest them. Thanks for an enlightening online blog on Fire and safety equipment.