Another element of underground parking at the National Mall: High-capacity bicycle parking

Another section of comments I made with regard to the National Capital Planning Commission's draft of the Visitor and Commemoration Element of the Federal Elements section of the DC Comprehensive Land Use Plan concerned bicycle accommodation. 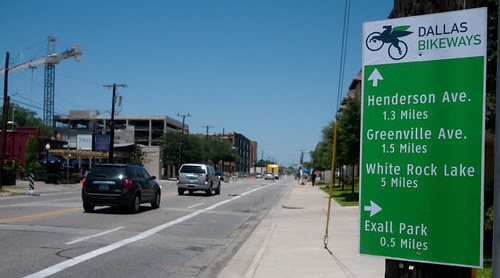 I wouldn't claim the comments are particularly scintillating, even if they are important:

- NPS special event permitting processes for events on the National Mall should require the provision of bike parking (beyond the bike valet services which may or may not be provided currently.)

Above: Dallas Bikeways logo and name on bikeway signage is used to brand the city's bikeway system.   Flickr photo by Bike Denton. 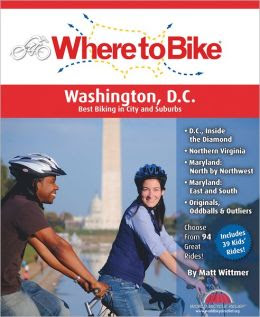 - Bikeways informational signage in the National Mall/Potomac Park areas is inadequate and should be improved. (E.g., try figuring out how to find the bikeway on the 14th St. bridge. Even if you are an experienced biker, it's not easy.)

- Branding regional bikeways with a common logo and contact information should be suggested.

- Bike tourism services should be integrated into visitor centers, especially at Union Station and the proposed Jefferson Memorial Metro Station.

If you put in an underground parking structure on the National Mall, include high quality bike parking too

This would be to serve special events and regular demands, and ideally would replace the more ad hoc bike valet services provided presently.

Underground bicycle parking, Apeldoorn, Netherlands. This parking is single level. Depending on the height of the space, it can be two or three levels, although third-level bike parking requires an attendant. 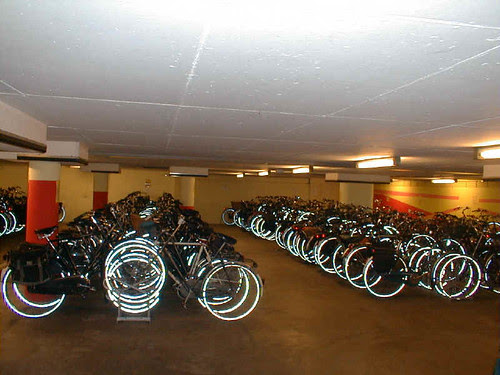 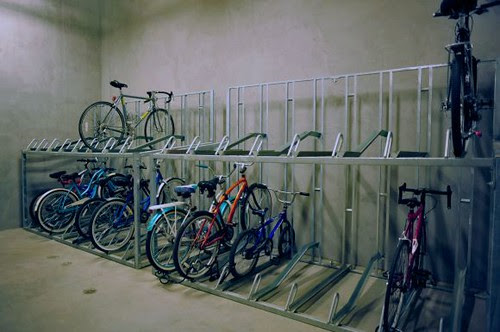 The advantage of the fully automated system is that it's automated. But such systems are set up to only deal with one person at a time, which in special event situations, doesn't work very well when there are dozens or hundreds of people in line, waiting to be served.

Probably traditional bike parking, underground, with security, but self-serve, is the best way to go.

So finally after searching alot i got to find something good for bicycles! as i need some ideas! will share it to Gatwick Parking

nice piece of share! it seems good to find parking spaces for bicycles, this reduces congestion in a great way.Airport Car parking at Gatwick

Where to park is an issues for all those with any kind of vehicle. Even those who have bikes are not free of it. providing suitable and secure parking can actually reduce there stress of bikes being stolen or damaged. cheapest gatwick parking

Spacious parking spots can be provided to public and save everyone from a lot of trouble. airport parking gatwick