I zoned on mentioning this, but Chicagoans can leave work a little early since the tour starts at 4pm.

It reminds me of the Commonspace project by urban design-advocacy group Re:bar and their initiative focusing on access to private spaces in the city that are supposed to be open to the public as a result of their development and zoning agreements with the City of San Francisco. See "Little-known open spaces enhance downtown S.F." from the San Francisco Chronicle.

The Intercontinental terraces show the mixed results of a decades-old city policy that requires new commercial buildings in central San Francisco to provide publicly accessible open space. More than a dozen such spaces now exist, including lush street-side plazas and rooftop aeries with spellbinding views. Yet many are hard to find unless you're in the know. Others are more Scrooge-like than welcoming.

The effort, which began in the 1980s, has added a network of pocket-size retreats to the Financial District's towers and traffic. Now that they're in place, though, the challenge is to weave them more fully into downtown life.

"This is part of the public infrastructure downtown," said Blaine Merker, a founder of Rebar, a design collaborative in San Francisco that has tested the openness of several of the spaces with "nap-ins" and kite flying. "It needs an informational aspect it doesn't have, and more of a social aspect. ... All these spaces are governed really subjectively."

On Friday, April 5, Chicago Detours inaugurates their new quarterly, one-off "Detours" with a "Nonsensical Walk of Indoor Spaces" in downtown Chicago. This walk, which weaves through lobbies, Pedway passages, short-cuts and corridors, is inspired by the concept of the urban flaneur, a walker who becomes aware of the psychological and social effects of the built environment by venturing out of standard spaces designed for specific uses. ....

The creative tour company's Executive Director Amanda Scotese will lead the first Detour, which is designed around the theme of urban space and geography. "Nonsensical Walk of Indoor Spaces" will be a fun, conceptual and spatial experience of the urban landscape. Unlike a regular walking tour, in which groups stop at each location to listen to guide commentary, for this one-time-only walk, a continuous line of participants will zigzag through more than 25 different buildings while playing a sort of a mobile game of telephone. 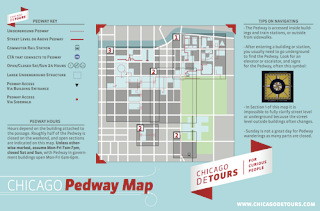 Leading the line of participants, Scotese will verbally share a short message to person behind her, and that person will tell the phrase to the person behind him. These messages will be quick (and perhaps surprising) cultural and architectural facts about buildings and their tenants.

Another Chicago Detours guide at the end of the line will track any variances on the original message. Participants will be inundated by the visuals of the architecture and the historic and contemporary background on the buildings as they walk through them.

For this "Nonsensical Walk of Indoor Spaces," Chicago Detours has arranged for permission to bring the groups through buildings, which have diverse architectural styles and functions, from wide open modernist corridors of condo buildings to ornate historic bank lobbies. The seemingly random walking route will expand one's concept of geographical space in downtown Chicago by taking people off their standard pedestrian paths. This diversion from typical routes is an expression of the urban theorist's concept of flaneur as a walker who becomes more aware of how political, social and cultural influences have come to shape the spatial connectivity and barriers between specific areas of downtown Chicago today.

Ultimately, the route of the walk and the information shared in the game of telephone will expose participants to a story of the city that can be told through its interior spaces and their relation to each other in the urban landscape.

The two-hour-long walk will be held Friday, April 5, 4pm-6pm. Group meets in the Pedway atrium of Block 37 at 108 North State Street and ends near the intersection of LaSalle and Jackson. Tickets are $20 and guests receive special gifts. Reservations are required and group size is limited. 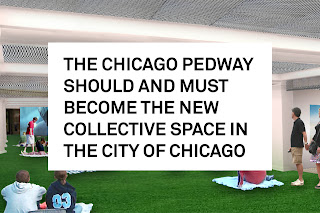 Right: image from the Chicago Pedway blog entry from the MAS Studio blog.

While this is the inaugural Detours for the company, the second Detour is scheduled for Saturday, June 1st and will explore meat around the Fulton Market area. This Detour, led by Saveur Magazine editor David McAninch, will include visits to an old school butcher shop and a new-school artisanal meats restaurant. The fall Detour will be during Chicago Artists Month (October) so an artist will curate an exclusive opportunity of engaging with visual artists that specifically interpret the city of Chicago. This Detour will also involve an artistic culinary experience created exclusively for the experience.

-- Chicago Detours blog entry, "New Chicago Pedway Map and Guide" discusses the Chicago underground Pedway system and a map that Chicago Detours has created for the system. They've printed it, and it is available in visitor centers and other locations.