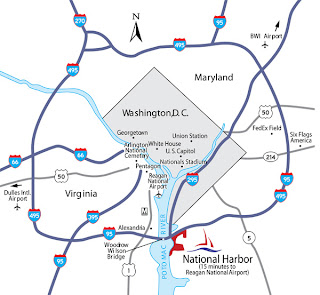 I am in the process of writing two different blog entries, one on how it's not enough to pass some regulations, a transit oriented development paradigm requires a wide set of changes to vision and attitude, the other on taxi issues.

Partly because recently, Prince George's County passed a bill ("Prince George’s Council approves plan to speed development around transit stations" from the Washington Post, also see the County Planning policy paper, Where and How We Grow) and because of continued problems with mobility at National Harbor, as discussed in two articles in the Post over the past week, "At booming National Harbor, commuting is a daily trial for service workers" and "Prince George's cabbies say Gaylord hotel is pushing them out."

... although the Washcycle blog rightly points out that bicycle commuting is an option for employees dealing with long waits for transit (and there is a bicycle route connection to National Harbor, including a path on the Wilson Bridge), it appears that there are minimal requirements imposed on National Harbor to provide information and other support programs to minimize transportation difficulties associated with the transit-disconnected location.

(National Harbor does tout cheap and easy parking, and does provide a shuttle to the King Street Metro, although it isn't clear that service employees are allowed to use it.)

The light rail line will connect the red, green, and orange line subways in ways that significantly increase the value of transit connection and proximity within the county.  Even so, despite the new legislation, the County still focuses on developing areas of the county that aren't connected very well by transit--greenfield development. 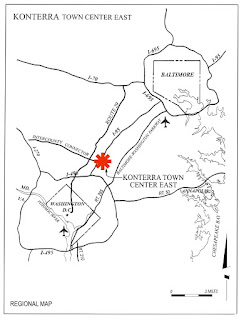 The primary examples are the Konterra development in northern Prince George's County and the National Harbor development on the Potomac River, adjacent to the I-495 Beltway.

And it feels like plans for those areas still take precedence over potential TOD, the push for a casino at National Harbor being the most recent example. And nothing about those projects prioritizes sustainable transportation.

Last week, the Post ran a story ("Prince George's cabbies say Gaylord hotel is pushing them out") about how National Harbor has created their own branded taxi service, because they didn't like the quality of the independent taxi service provided licensed cabbies.  And in all likelihood, because they want to participate in the revenue from providing the service. 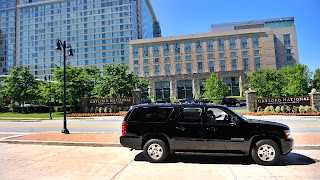 Clearly, National Harbor can deal with mobility, if it is in their financial interest.

The article recounts how for the most part, National Harbor has made it very difficult for licensed taxis to pick up fares at the complex.  (Although I can sympathize with their concern about the quality of experience received by their guests, and this is an issue that I will be writing about.)

Frankly, it would be cheaper for National Harbor to provide employee shuttle services to the nearest Metro stations than it is for WMATA to do it.  It's about 5 miles to the Eisenhower Avenue Metro Station in Fairfax County, Virginia, 5.5 miles to the King Street Metro Station in Alexandria, and about 8 miles to either the Branch Avenue or Suitland Stations on the Green Line.

Why isn't National Harbor required to provide this kind of service as part of their development agreement with the County?

Until this kind of planning is required on the part of major developments (the mobility connection discussion on the website of Konterra and affiliated consultants mostly focuses on the automobile, although they do acknowledge the nearby Muirkirk MARC railroad station on the Camden line), putting in zoning changes to streamline development approvals at existing stations is a joke. 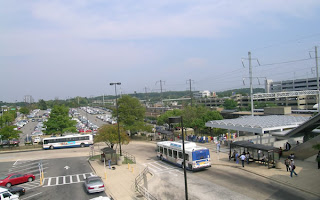 Well, it does, but the concept of transit oriented development is supposed to focus on more qualities than merely density and transit access.  The idea is to enable walkability and livability in ways that complement transit use and access.

But the development paradigm shaping those areas is decidely pro-automobile.  Making bad development faster, just because it's by a Metro station doesn't serve anyone very well.

Part of the problem with the PG Plaza area development is that it was shaped the way it is beginning in the 1960s (see "Back to the Future" from the Washington Business Journal), because they knew some sort of rapid rail system would be constructed.

But they started developing decades before modern practice coalesced around placemaking elements in association with "transit oriented development." Interestingly, a goodly amount of the TOD associated with "University Town Center" did very badly during the real estate crash, which has to make developers somewhat leery about proceeding elsewhere in the County, due to the general weakness in the real estate market there, along with the poor track record.

Prince George's County needs to change its development paradigm more significantly.  It's not enough to pass some regulations about development proximate to transit.

One way to start would be to move its agencies from transit-disconnected locations, to transit-connected locations.  The County's main administrative center is about 9 miles away from the nearest subway station (Largo).  The main office for the planning department is not too far from a subway station, a couple miles, but it is on a greenfield site, disconnected from other economic activity.  Court buildings are often not located by transit stations, etc.