Casinos in Atlantic City may be a losing proposition

I was talking with someone about "The Nook," the e-book created by Barnes & Noble.  We were talking about "scale."  B&N is a big company, with more than 600 bookstores, plus the college division.  They operate at a national scale, albeit circumscribed by their physical footprint.

Amazon.com is an international company, it operates online, at a global scale (yes B&N is online, but not at the same scale as Amazon).  That's a much bigger platform from which to provide their own e-book solution, "Kindle."

So Amazon's Kindle is beating down "The Nook."  B&N took a risk in investing.  Were I in the position to make that decision, I probably would have done the same thing, thinking that the company, with a national footprint, had the right scale to make it work.  But they weren't.

Casinos as destinations: in the USA, how much room is there for more than Las Vegas?

The same goes for casinos and gaming/gambling.  Maybe for the most part there are three segments to the market: (1) people who take "long" vacations to go to gaming places, mostly to Las Vegas, which is the pre-eminent gaming destination in North America; (2) the related group of people who go to conventions in Las Vegas, also staying overnight for multiple days; and (3) people who go to places closer to home, and for the most part, don't stay overnight.

Atlantic City New Jersey has tried to position itself as the East Coast Las Vegas in terms of being an overnight-vacation destination for people who want to gamble.

But maybe there is only enough interest and demand across the United States to sustain only one of those types of destinations, Las Vegas.

And as more and more states in the Mid-Atlantic legalize forms of gaming, Atlantic City's ability to serve as a premiere gaming destination is further diminished and circumscribed.

See the AP story "Atlantic City casino earnings fall nearly 45 percent," the Washington Post story, "Atlantic City's losing streak, as more states compete for gambling revenue and jobs," and this past blog entry, "What to make of casinos as an "urban revitalization" method and detroyer?"

I think it's interesting that New Jersey is trying to use the monies they get from gambling in a concerted way to improve Atlantic City, through the New Jersey Casino Reinvestment Development Authority, which is investing in various infrastructure and community improvement ventures.  But maybe, despite everything, it won't be enough.

Especially because of the push to expand casino gambling in New York State ("Casino Referendum Planned by New York Leaders," New York Times) and especially New York City, which now has a casino in Queens, located near Asian-American neighborhoods, and historically, Asians have been big gamblers (the Chinatown bus system on the East Coast was originally created to take Chinese restaurant workers to Atlantic City on their day off; Macau; etc.). 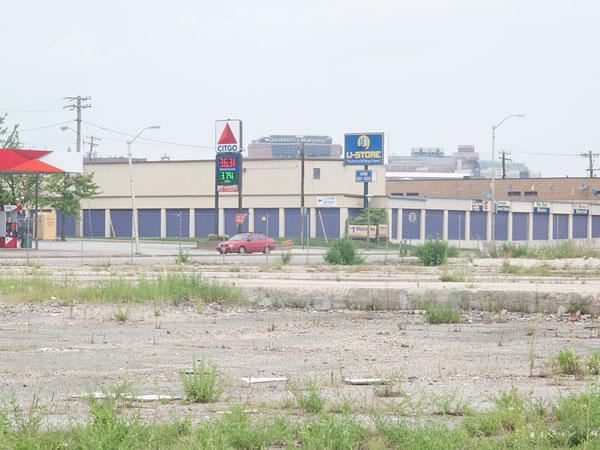 We were driving through Baltimore a couple weeks ago, and we saw the location where they are building Baltimore's casino (Horseshoe Baltimore Casino), in a still industrial area off Russell Street ("Maryland gambling revenue rises 27.6% last fiscal year; Lottery sales drop," Baltimore Business Journal).  The other side of the street is gas stations and such (I like the french fries at Royal Farms...).

It's off to the back of the M&T Bank Football Stadium there.

The impact of a casino at National Harbor in Prince George's County is likely to be significant.  Technically there are competing proposals for other locations in the county but they are not likely to be chosen.  This will help that development, when it is only marginally successful at the present.

And it is on the Beltway, giving it easy access from Northern Virginia especially, but also from DC.

This will impact the success of Maryland's urban casinos, in Anne Arundel especially, which likely gets a lot of customers from the Washington area.

In any case, it's a matter of shifting economic impact around the state and throughout the Mid-Atlantic region.

In one of the best urbanist movies ever -- "back to the future ii" I think evil future BIF turned the city of HIll Valley (get it?) into a giant casino.

And in terms of evalualtion public investments, etc, on a previous entry it is hard to measure if ANY casino can meet that goal.

(Basically, as long as casino goers are old people playing quarters there ins't much money transfer going on)

Baltimore will not be saved by casinos- what they need is to drastically lower the real estate property taxes on residential and small businesses. I was shocked when I looked at houses there a few years ago at how much of a tax burden you must incur on a 100 K house- and how low that same burden is in DC. DC is a far better deal tax wise- and people seem to have awakened to this fact and the city is booming. Incentives really do make people act and react. This is what is needed.

Declining cities typically have this problem. Although you can argue that the building would be worth more elsewhere, more comparably tax wise.

In Texas long ago, people complained that the casinos in Louisiana were mostly filled with people from Houston and Dallas (which was accurate) and that Texans were thus subsidizing LA. So a Texas lawmaker proposed buying land along I-10 and I-45 at the state line. They would tell LA, "Those are some nice casinos you have there, it would be a real shame if we opened some of our own right at the LA state line, wouldn't it." And then ask for a cut of the tax revenue from casinos west of the Mississippi in exchange for NOT opening casinos. The idea was brilliant, Texas gets some of the money it lost to LA without any of the problems associated with gambling, and without the risk. Unfortunately, it went nowhere.

it would be interesting to see if it could work that way. As it is, casinos run by Native American tribes have different issues, they are sovereign from the state in which they are located. That creates different issues.

Thank you for providing such valuable information and thanks for sharing this matter.
Visit here-"Online Pharmacy"