The program, "Europe in Baltimore | Transit: Creative Placemaking | Getting to Know Europe," looks at Baltimore's arts districts, how they operate, and what can be learned, while in turn sharing information about culture districts that operate in countries across Europe.

I am doing some writing for the project on culture-based revitalization efforts that operate at either the Pan-European, national, or city-district scales, and will be writing about 8 cities:

The first entry, which provides an overall framework for studying and comparing these efforts, is here:

------
So as a result, I am going back and reading more about the topic of culture districts.  In my paper from 2009, "Arts, culture districts and revitalization," which was the basis of a presentation at the conference for the Literary Managers and Dramaturgs of the Americas, I relied a lot on a paper by John Montgomery. 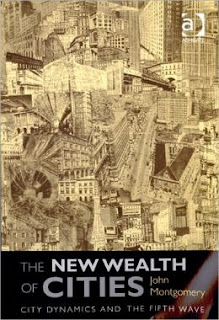 I've since acquired his full length book treatment of the subject, The New Wealth of Cities: City Dynamics and the Fifth Way, and I have to say it is magisterial, perhaps the most complete book on the topic of the creative economy and the centrality of cities in the process.

Of course, the project provides me with the impetus to read Cultural Quarters: Principles and Practice, which has been in my "to read" stack for awhile.

And I have come across research I wasn't familiar with, especially the work of economics professors from Italy (working separately), Walter Santagata--who sadly, died in the last few weeks (see "In Memoriam: Professor Walter Santagata," UNESCO World Heritage) and Luciana Lazzeretti (she also writes about tourism), which means I aim to acquire and read some of their work too.

Plus Prof. Lazzeretti has an interesting paper about "Cities of Art" as culture districts, which is an interesting way to consider cities like Rome, Florence, Venice, and Athens.

Looking forward to this.

Saw an article a few days ago on the failure of orchestra to "popularize" themselves. Maybe the economist, will see if I can find it for you. New RSS readers make it hard to search...

Also Grand Rapids Art fest as a US example.

European "White Nights" and that guy who does the thousands of naked people are also some examples.

one of my big problems is inadequate filing, and stacks of paper all around (which today are a particular bone of contention) because I hate filing...

I came across a different article on orchestras, about reaching out to younger audiences. Part of the point of the article is that traditionally, orchestras haven't really marketed beyond what we might call their legacy audience, and how in response to the marketing, they did in fact have success reaching younger segments.

As always, I appreciate any links, resources you can provide!

Granted, it is TNR being snobs. Which is rich with all the FB money -- not the mention the reality TV that Foer's wife puts out.

But general point is some art instutitions do better with the pops than others.