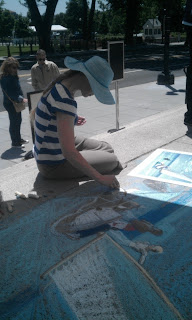 I think chalk art is cool.

Via Colori®: The Street Painting Festival is an organization that coordinates the production of chalk art fairs in cities across the country.  One used to be held in the Short North Arts District in Columbus, Ohio for many years.

The artist Julian Beever does some really neat work, which he calls "pavement drawings,"with 3-D effects.

It’s not every day that a busy sidewalk on Connecticut Avenue becomes an artist’s concrete canvas, but the Golden Triangle Business Improvement District (BID) is doing just that with its “Explore Our Neighborhood in Chalk” project, Monday, Aug. 5 from 10 a.m. to 6 p.m. (If it rains, the project will be moved back each day Aug. 6-8 until the weather permits.)

The chalk mural will be drawn by Whitney Waller, a local artist from the Corcoran Gallery of Art, who will transform the Connecticut Avenue Overlook into sidewalk scenery for commuters, office workers and tourists to enjoy. The Connecticut Avenue Overlook is located at the top of the Golden Triangle in the semi-circle above the underpass, near Dupont South Metro Station.

Waller will use chalk to recreate iconic destinations that are located within the 43 blocks of the Golden Triangle neighborhood, including the National Geographic Museum, St. Matthew’s Cathedral, the Heurich House Museum and the Tiny Jewel Box, located in a historic building on Connecticut Avenue. 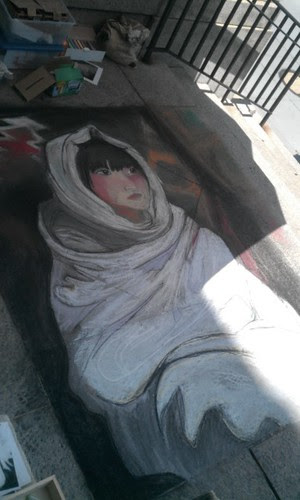 While the chalk art project is temporary, the Golden Triangle BID has other permanent public art displays that have made the central business district one of the city’s most vibrant commercial areas. Last year, the BID unveiled the second phase of the Connecticut Avenue median, complete with colorful plants and a display of lights, pattern and movement programs that change the avenue into a magical scene at night.

The Golden Triangle BID’s emphasis on integrating public art into civic places to beautify the neighborhood and give it a sense of identity has taken many different forms. The BID has created wall murals, painted historic call boxes, and installed five artistic bike racks, including one made of recycled parking meters and another fashioned in the shape of paper clips. The BID partnered with the DC Commission on the Arts and Humanities to add light-enhanced wall art at the Farragut North and Farragut West Metro stations.

This chalk art project is being done in partnership with the Corcoran Gallery of Art and is part of the Golden Triangle BID’s “Explore Our Neighborhood” campaign, launched earlier this year with National Geographic in celebration of its 125th Anniversary.

Spectators can enter a photo contest and win up to $100 by submitting their photo at the Golden Triangle chalk mural on our Facebook page or by sharing it on Twitter or Instagram with the #exploregoldentriangle hashtag. Other prizes include tickets to the Corcoran Gallery of Art, the National Geographic Museum and Jamba Juice.


About the Artist
Whitney Waller, of Virginia Beach, is currently a Bachelor of Fine Arts student at the Corcoran College of Art + Design. She teaches for the Corcoran’s Aspiring Artists and Camp Creativity programs. She is also one of the Corcoran’s Summer Saturdays chalk artists, as she recreates gallery pieces on the front steps. She has previously studied at the New Orleans Academy of Fine Arts.

The Golden Triangle Business Improvement District is a non-profit organization that works to enhance DC’s Central Business District from the White House to Dupont Circle and 16th Street NW to New Hampshire Avenue NW. The BID’s primary focus is to provide a clean, safe and friendly environment within its 43 blocks of public space for area workers and visitors. The BID has a 23-member Board of Directors representing owners and tenants in the central business district.

ya gotta start somewhere... But yes, they could have taken the inner circle of Dupont Circle...