I was reading an op-ed in the Post by Katrina vanden Heuvel a couple weeks ago, "A populist insurgency in New York City," which argues that in 2013, the Mayoral election campaign in New York City is perhaps the most significant election "nationally" for progressives.

Then I went to Seattle and discovered that a City Council Candidate, running as a member of the Socialist Alternative, because she was one of the top two vote getters for the seat, is on the ballot for this Fall's local election there.

Both Seattle and New York City have a form of run-off elections.  In Seattle, the top two vote getters for each position go to the General Election ballot.  In New York City, a candidate has to win at least 40% of the vote to not face an interim run-off election.  By contrast in DC, the top vote getter(s -- in the case of at large Council candidates, the top two) go on to the General Election, and the primary  "is tantamount to being elected."

Seattle's primary election was held on August 6th (in Washington State, they do elections by mail).  New York City's is scheduled for September 10th.  DC's primary election is now held in April, which leaves a gap of almost 7 months between the primary and the general election.   I argue this is but another form of incumbent protection.

New York City.  The New York Times has been running a series of editorials, slugged "The Next Mayor" on key issues and positions that the Mayoral candidates should be particularly attuned.   A link to that tab/webpage is accessible through this editorial, "Wanted: Another Green Mayor."  The topics are education, environment, homelessness, hospitals, jobs, natural disasters, and public safety.

And it reminded me that too often, the Washington Post rarely runs a similar series of editorials, that the paper lets candidates slide when it comes to positions on issues, or more importantly, what we might think of as vision or "themes" concerning the city.

With regard to the election campaign, which was made crazy by the entry of Anthony Weiner, Mayoral candidate Bill de Blasio has been running on a particularly progressive agenda, calling for higher taxes on the wealthy, building more affordable housing, focusing attention--as the city has become much wealthier--on the declining middle class, supporting an end to more wanton stop and frisk policies.

On Sunday though, the NYT did not endorse Bill de Blasio, but Christine Quinn ("For New York Mayor"), who many paint, perhaps unfairly, as a lite version of current Mayor Michael Bloomberg.  The NYT endorsement did so because it avers that Ms. Quinn does a good job of tempering progressive desires with the economic and political realities of limited financial resources and a difficult political environment for New York City both in terms of the State Legislature and the Federal Government, and the anti-city agenda of the House Republican majority.

Note also that elections for Borough President and City Council, Public Advocate, and the Council Speaker positions are also up.  And the Times has been making endorsements in those elections as well, e.g., "New York City Election Choices."

They did not endorse Julie Menin for Manhattan Borough President.  I wrote about her candidacy here, "Wow! I wish I could vote for Julie Menin, candidate for Manhattan Borough President."   I was particularly attracted to her land use and planning platform, which calls for neighborhood master planning.  (As commenter Christopher makes the point, NYC doesn't do master planning, they do zoning.)

And they didn't endorse Elliot Spitzer for Public Advocate. 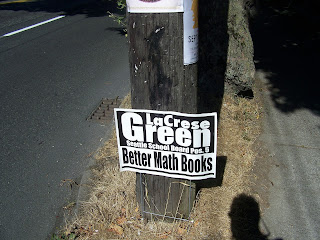 Seattle.  In Seattle the Mayor's race is equally interesting.  There were many candidates in the primary and most would happily be labeled progressive ("Mayoral vote becomes ‘liberal’ city’s identity test," Seattle Times).  Mike McGinn, the current mayor, running for re-election, and former director of the Sierra Club, along with State Assemblyman Ed Murray, who is gay and pretty progressive, were the top two vote getters, although people argue that a majority of voters (almost 80%) voted against McGinn.

But McGinn, not seen as a friend to capital by the Seattle Times, especially because his call for Whole Foods Market to pay higher wages, is running and is painted as the progressive, "moving hard to the left," and Murray, who was endorsed by the Seattle Times ("Editorial: The Times recommends Ed Murray for mayor of Seattle"), is not positioning himself that way.  Also see The Stranger's political endorsements--certainly you won't see writing like this in the New York Times or the Seattle Times. 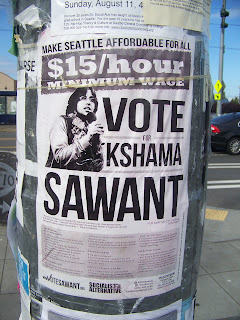 And that Socialist candidate for City Council?  She is Kshama Sawant, an economics instructor teaching at Seattle Central Community College ("Why We Endorsed Kshama Sawant (And Didn't Endorse Richard Conlin)," Stranger).  And in her race for that seat, she  garnered 35% of the vote in a three candidate race.

It's interesting that while it is likely that DC's Mayor Gray will veto a $12.50/hour minimum wage (including benefits) for big box stores ("Gray to face veto decision on 'living wage' bill opposed by Wal-Mart" from the Post), she is calling for a $15 minimum wage, rent control, and higher income taxes on millionaires.  Needless to say, she was not endorsed in the primary election by the Seattle Times.

Conclusion: Seattle makes a convincing case to be termed progressive in the context of 2013 elections.  How many of the nation's largest cities have a Socialist Alternative candidate not just on the ballot, but getting enough votes to make it to the General Election ballot?   (Minneapolis has a shot too, see "Tight Ward 9 Race Could See Socialist Elected to City Council.")

Pending the September 10th primary in New York City, Seattle may be the place to be for progressives, at least in 2013 -- although if poll results are to believed, Bill De Blasio is likely to win the primary with more than 40% of the vote, according to the Post ("NYC mayor poll: de Blasio on verge of avoiding Democratic runoff).