Separate and unequal: affordable housing in NYC and social exclusion vs. social inclusion

A concept that I remember coming across reading about UK social welfare policy is called "social exclusion" and it:

"... refers to processes in which individuals or entire communities of people are systematically blocked from rights, opportunities and resources (e.g. housing, employment, healthcare, civic engagement, democratic participation and due process) that are normally available to members of society and which are key to social integration. ... The outcome of social exclusion is that affected individuals or communities are prevented from participating fully in the economic, social, and political life of the society in which they live."

In the UK context (although according to Wikipedia the term was first used in France), it means developing and implementing policies that don't re-ify exclusion. 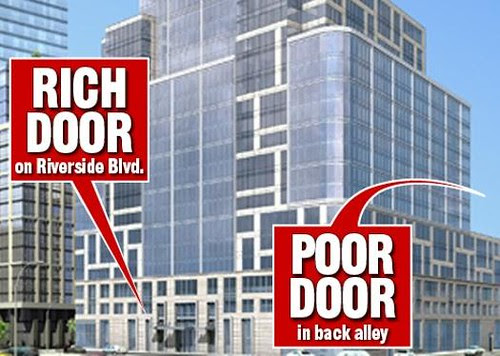 NotionsCapital calls our attention to how in NYC, an otherwise new and expensive multiunit apartment building that also includes a section of "affordable housing" has created a separate entrance for the affordable housing section.

See "Upper West Side condo has separate entrances for rich and poor" from the New York Post.  From the article:

The poor will use a separate door under plans for a new Upper West Side luxury tower — where affordable housing will be segregated from ritzy waterfront condos despite being in the same building.

Manhattan developer Extell is seeking millions in air rights and tax breaks for building 55 low-income units at 40 Riverside Boulevard, but the company is sequestering the cash-poor tenants who make the lucrative incentives possible.

Five floors of affordable housing will face away from the Hudson River and have a separate entrance, elevator and maintenance company, while 219 market-rate condominiums will overlook the waterfront.

Personally, by separating the affordable housing off from the rest of the project, I would argue that the project is undeserving of any "public benefits" from zoning changes and tax breaks.

By way of comparison, note that Montgomery County's affordable housing provisions require that affordable buildings be like the regular buildings, not different.  I don't know if DC's "inclusionary zoning" law has the same requirement.  Probably.

It's an especially creative example of "financial engineering" in the housing world.  (Note that in DC, Eastbanc did a not dissimilar form of financial engineering when they set up the expenses to flow 100% to the city for the maintenance of the ground floor around the condo building that will have a public library on the first floor.)