Being the National Capital, Washington, DC is a symbol of the nation, and the National Mall is frequently a place of celebration; such as events held during the Presidential Inauguration; festival, such as the annual Smithsonian Folklife Festival or National Book Festival; and protest, ranging from the Bonus Army marchers in the 1920s, the Anti-War protests in the 1960s and 1970s, and of course, many marches on Washington for peace, justice, and civil rights, including the 1963 March on Washington for Jobs and Freedom, which is being celebrated this weekend, its 50th anniversary ("50 years later, thousands retrace March on Washington," USA Today).

I collect postcards about Washington, images of either the Federal City as well as the local city (restaurants, landmarks located within neighborhoods, church buildings, etc.), and I am especially interested in the messages that visitors write on the postcards which tells about their impressions of the city.

One of the great things about DC ephemera (and sadly, with the migration of such materials to the Internet they cease to be able to be collected) is that back when people sent postcards and such, they sent them home to friends and relatives, so you can find good stuff all around the country. 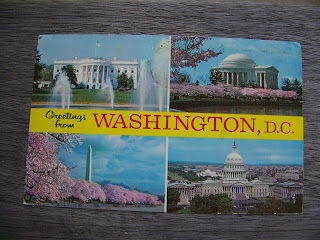 I picked up some postcards in Seattle.  Going through them at the shop I set interesting ones  aside for further review.

Suzanne commented on this one, it seemingly being a particularly average "Greetings from Washington" postcard.  She wondered why I wanted to spend money on such a boring card.

But I wasn't interested in the cover image.  It was the message.

The person visiting the city came during a big Anti-War protest, the "Moratorium," and the message comments on how the protest made getting around difficult, that streets were closed, and also full of people. 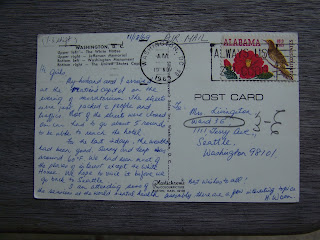 Some of the other elements I look for in postcards are the postmarks--most are generic "Washington" postmarks, but I've picked up postcards with Takoma Park, Brookland, Terminal Station (Union Station), and Mount Vernon on the Potomac (Mount Vernon, Virginia) postmarks--and the cancellation message, which on occasion may be interesting.

This particular postcard was sent by a health care professional to someone that she worked with, addressed to a specific medical ward at the hospital.  She had come to DC for a conference. 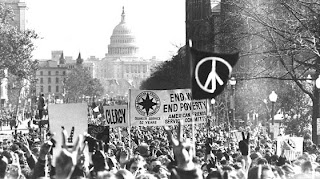 Maybe this is some of what she saw.

Caption: With the U.S. Capitol in the background, demonstrators march along Pennsylvania Avenue in an anti-Vietnam War protest in Washington, on Moratorium Day, November 15, 1969.  From: an AP file photo reprinted in a North Jersey Herald history feature on events in the year 1969.

personally, I have a bad tatse about most protestors and protests- my oldest sister was a march co-ordinator in the May Day demonstration here in 1970 and she got the $hit kicked out of her. Many of these so-called demonstrations are mere excuses for degenerates and morons to run ramant and go wilding. My cousin's restaurant was attacked in the early 80's AFTER the kkk called off a scheduled appreance in the city- but this did not stop excited "youth" fro running all thru central DC busting windows and beating up innocent passers by. My cousin said they did $30,000 in damage to the building. Who can forget "Human Kindness Day" which turned into a riot when kids from se descended on the crowd throwing bricks and bottles- one person's eye was put out and numerous people injured including one of my friends. I tend to avoid all crowds- especially the more volatile events. I would never put myself in danger- especially over sill crap like most of these people come here for. It just is not worth it. Some of these idiots have nothing to lose. I wonder how much of it is belief and howmuch is really just an excuse to go crazy or to exploit others.

guess to be fair- I must contrast these examples with dad's stories about the Bonus Marchers back in the late 20's or early 30's- he used to say that everyone in DC tried to help them out- avarage people assisted them because they were just like anyone else- not elitist activists from well-heeled familes out for a thrill ride to DC to bust things and to make a mess- but real people fallen on hard times who had a genuine issue to take up with the gov't.

And after all these years, still inadequate restroom facilities on the mall. Porta potties = ew.

I like the idea of the underground parking structure proposed by the National Coalition to Save Our Mall, because you can integrate these kinds of services into it, without having to impinge on the viewshed of the Mall.

I have to sit down with them though.

But even then, there is no way that it makes economic sense to build enough restrooms to satisfy max demand.

nice information.Much obliged to you for giving such essential data, and a debt of gratitude is for sharing this issue.