-----------
Reprinted because Walk to School Day is tomorrow, with these updates:

A. The Post ran a story on Friday in the Kid's Post feature on Walk to School, "In D.C., more kids head to school by bike." This supports the point I made in item #3.

B. While filing over the weekend, I came across the original Post story on new walk vs. bus to school policies in Loudoun County, Virginia, "Loudoun parents decry plan for limited school bus service," which presaged the Jay Mathews column listed in item #5 below. It was from July.

I found this ad in an antique mall in West Seattle. The push to drive kids to school started long before we realized. This ad is from 1923.

But it has been only since the 1970s that walking to school has fallen off precipitously.  According to a study comparing data from the National Household Travel Survey:

2. I will take the opportunity to repeat the recommendation I have been making since 2009, when I had the privilege of spending the morning at Stoneleigh Elementary School in Baltimore County on Walk to School Day.  Stoneleigh is a national best practice example of how to do walk to school programming.

All school districts should be required to perform balanced transportation planning--accommodating walking and biking, not just the school bus and parents driving their kids to school.

It's unreasonable to expect walk and bike to school efforts to be totally ground up and ad hoc initiatives by parents, completely dependent on the support of the principal, and with little if any support from the school district.

The school systems that provide support for walking and biking from the central office end up with stronger programs, real programs, greater participation by schools and families, and lower bus transportation costs.  Some cities, like Minneapolis, have a city Safe Routes to School Plan.  Boulder's school district has sustainable transportation planners in their central transportation office.

The State of Washington doesn't require balanced transportation planning exactly, but they do require that schools provide a safe routes to school map for all elementary schools, allow funds allocated for transportation to be used to support walking and biking, including physical improvements, and they recommend, but do not require that all school districts create a standing School Safety and Transportation Committee to deal with all transportation concerns, not just bus-based transportation.

3.  With the start of the school year this fall, I have noticed a significant rise in the number of children biking to school, in Capitol Hill especially, but also in my Manor Park neighborhood, and on the Metropolitan Branch Trail--which is a nice protected route that connects some charter schools in Brookland to other parts of the city. 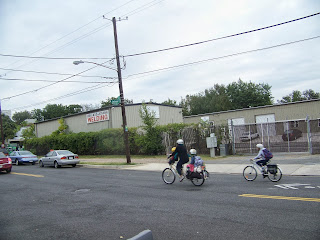 Right:  this person rides via the Metropolitan Branch Trail up to Brookland on a Burley, with two small kids on her bike, and her daughter trailing on her own bike.  I thought they went up to the charter school right there on 8th Street NE, but it turns out there go further to some other location, deeper into Brookland.

I am intrigued by the rise in the use of trailers, children seats, Burleys and even some Bakfiets--Dutch cargo bikes with the cargo section in front.

I think this demonstrates a continued uptake in bicycling for transportation.  When you start seeing families riding, or people making more difficult trips, it's an indicator of reaching critical mass. (See the work of Everett Rogers and Geoffrey Moore for more insights into the diffusion of innovation process.)

Then again, walking to the Takoma Metro a week or two ago, we did witness some kind of meltdown by a mother with regard to her child.  Both were biking.  Somehow the mother thought that the kid wasn't riding safely, which I didn't seem to think was the case, based on what I saw.  She lost it, was screaming, made the girl stop and said they were going back home and driving to school.

I wonder how many schools do bike rodeos and trainings at the start of the school year?  Probably not many, but it's something definitely worth doing.  That might have helped the screaming mother to be more confident in riding.  Plus providing more bike parking will increase riding also.

I do notice that some parents will leave their trailers locked up at school and then go on to work. 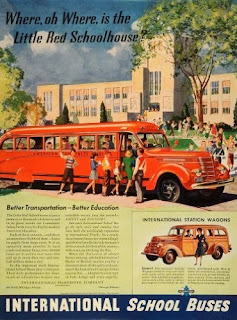 4.  It's expensive to run school buses and find drivers.   But if you can do the job, it pays ok and offers benefits.  Benefits are a big sweetener.  See "Washington area bus drivers gear up for the new school year" from the Washington Post.

5. Jay Mathews of the Post misses the point in the piece, "What to do when a school district evades its own rules."

The article is about how Loudoun County Schools wanted some households in a particular area to walk to school even though technically, they were within the school system's stated distance for getting bus transportation, and how the school system didn't follow its own rules.

But the real issue, from a health and budget standpoint. is that more kids should be walking to school and these houses are within one mile of their elementary school and there is a good network of sidewalk infrastructure so that they can get there safely.

It cost hundreds of dollars per student per year to bus them.  Wouldn't parents rather that money be directed to instruction?  See "Iowa City elementary students forgo buses and walk to school" from the Iowa City Daily Iowan.

Right: Safe Routes to School map for Bear Creek Elementary School, Boulder, Colorado.  Some of the elementary schools on some days have over 50% of their total trips made by walking or biking.

All school systems, not just Loudoun County, need a more nuanced policy, one that isn't strictly based on distance, but on what we might call the "walkability quotient" or walk score of a school's catchment area.

6.  In San Francisco on Park(ing) Day, on Friday September 20th, one of the groups participating was a sixth grade class from the Friends School.  How cool is that?

Image from the Mission Local blog.  According to an article in Inhabitat, the children:

celebrated parking day by giving away free compliments (!) and chanting “Honk if you love the environment”! Their pop-up park featured cool recycled cardboard furniture and plenty of impressive artwork.

7. At the start of the school year, the Post also ran an article on safety patrol activities in DC, "On safety patrol, students take pride in protecting others," ironically on the same day as the Mathews column.

I was a safety patrol boy myself back in 5th and 6th grades. It's a great way to build awareness of pedestrian safety and encourages self-help and civic participation. and hopefully, lifelong involvement in your community.

8.  Other good examples of advocacy groups involved in the issue include Seattle's Feet First pedestrian advocacy group, which is a national best practice example, especially for mapping, and the Starkville in Motion group in Mississippi, which does walking and biking promotion, and specific programs for schools.

And many states have good resources too, such as Iowa (I-WALK: Iowans Walking Assessment Logistics Kit, Safe Routes to School Program) and Michigan.

I'm even now learning from you, but I'm making an attempt to attain my targets. I surely enjoy studying every thing that is posted on your website.Maintain the tales coming. I appreciated it!.
dallas party bus
dallas airport transportation

That is me on the Xtracycle on 8th St! We ride from R St NE in Eckington up the MBT, through Catholic U campus, all the way to Washington Yu Ying PCS at the corner of Taylor and Harewood Streets NE. Though Yu Ying is at the top of a couple of pretty nasty hills, we have a surprising number of folks who get there by bike. To encourage this, we hold a series of 'fuel free Friday' events (completely parent driven) in the fall and the spring, to coincide with Walk and Bike to School days. Last spring, we came in 3rd in the DDOT 'Golden Bike' competition with 19% of our kids participating in bike to school day. Considering our location, and that we draw our students from citywide (as compared to the neighborhood school on Cap Hill that won), it is a huge accomplishment.
All that said, we have lots of 'fair weather cyclists', and most of us who ride regularly do so because we have our kids on-bike, in trailer, or on a trail-a-bike. Harewood and is a very steep hill :)

Thank you for providing such a valuable information and thanks for sharing this matter.click it...: https://www.dosepharmacy.com